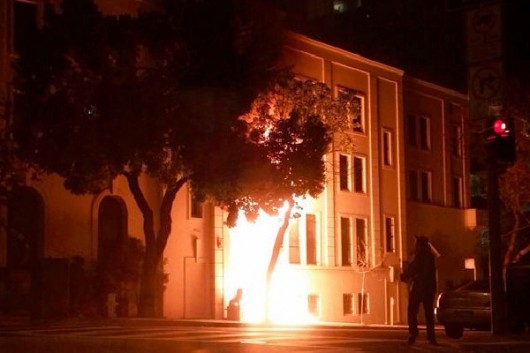 Chinese consulate in San Francisco on fire, via chinaSMACK

First links of the new year!

Fire! “The F.B.I. is leading an investigation into a fire that was set Wednesday night at the main entrance of the Chinese Consulate General in San Francisco, the authorities said Thursday. No injuries were reported.” (NY Times)

Nasty. “A Chinese anti-corruption whistleblower has been severely injured after being set upon by three knife-wielding assailants in what relatives believe was a ‘revenge’ attack. // Chen Jinwen, from Shenzhen in the southern province of Guangdong, was withdrawing money from a cash point on Sunday afternoon when the frenzied assault took place, one local television channel reported. // Doctors told the Southern Metropolis newspaper the 42-year-old whistleblower suffered 13 knife wounds across his back and limbs and now faced permanent disability because of a severed tendon in his left leg.” (The Telegraph)

Quite the admission. “A doctor confessed to stealing seven newborns and selling them for cash, exposing an underground human trafficking ring in China. // According to the official Xinhua News Agency, 55-year-old Zhang Shuxia stood in front of a court in central China on Monday and pleaded guilty to selling seven babies to traffickers between November 2011 and July 2013.” (WSJ)

Rubber duck bursts in Taiwan. “The famed 18-meter inflatable art installation, created by Dutch artist Florentijn Hofman, burst and deflated on Tuesday, leaving locals shocked and disappointed. // The duck’s demise came only 11 days after it arrived in Keelung City Harbor, the latest in a multi-city Taiwan tour for the celebrity bird.” (CNN)

Paul Mooney exit interview. “This is the best time to be a journalist in China, which is why it’s so difficult for me to have to leave now. China is going through dramatic changes and is facing a lot of challenges, but I don’t think the government is taking the right steps to deal with these issues, which means we can expect to see things get worse before they get better. We are seeing a growing number of protests by farmers, factory workers, migrant workers, AIDS victims, urban residents and others. There are so many stories I never got a chance to report.” (The China Story)

Look who wants to buy the NY Times. “Chen Guangbiao, a well-known philanthropist, is something of a celebrity in China. During a particularly murky bout of pollution in January, the ebullient and tireless self-promoter handed out free cans of ‘fresh air.’ // But Chen says he is perfectly serious in his bid to buy the Times, something that he said he had been contemplating for more than two years. He said he expected to discuss the matter on January 5, when he is due to meet a ‘leading shareholder’ in New York.” (Reuters)

Annual democracy protest in Hong Kong. “Pressure has been building between democratic forces in the financial hub, which returned to Chinese rule in 1997, and China’s stability-obsessed Communist Party leaders who fear a rival democrat being voted into office. // Protesters at the annual New Year’s Day democracy rally shouted slogans demanding full democracy in 2017, with a key condition being the open nominations of candidates so that anyone, including China critics, can run for office.” (Reuters)

A place to drop off unwanted children. “Last August, the city of Shijiazhuang became China’s first to open government-supported drop sites for unwanted infants – a decision that has drawn the ire of many activists. // Critics say the mere existence of such a home could be encouraging people to adhere to an old Chinese tradition of abandoning sickly or unwanted children to the elements. // But the homes seem to have a prominent position on the government’s 2014 agenda. The Shijiazhuang Abandoned Kids Home has already inspired similar centers in Nanjing, Xi’an and Shenzhen.” (Beijing Today)

Xi Jinping’s office. “China’s president, Xi Jinping, may not have a computer on his desk, but touchtone telephones and pencils are in ample supply for the Communist Party chief. // In delivering a nationally broadcast New Year’s greeting, party leaders provided the Chinese public a carefully scripted first glimpse into what state media said was Mr. Xi’s office.” (WSJ)

Pacman and Peso – Stand Down/ Escape to North Korea Prelude interlude (this story):

“The 12 most infamous racist tweets, ‘Twitter attacks’ on Asians.” (Stuarte)

A visit to China’s famous longevity village. (The Guardian)

“For Prostitutes Jailed in China, Forced Labor With No Recourse.” (NY Times) 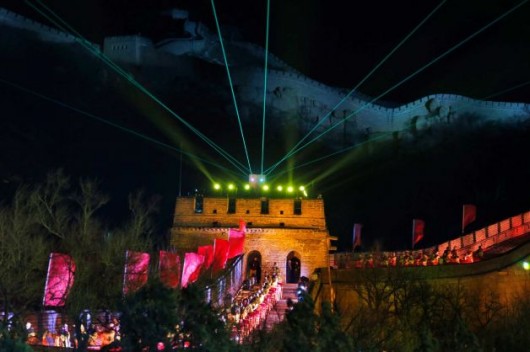