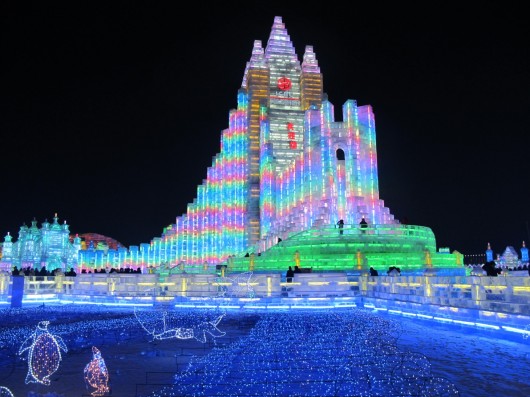 All images by Geoff Irving

If you’re wondering whether to take a weekend to visit Harbin, the answer is yes. It’s not all Snow and Ice.

First things first: yes, it’s cold. You’ve probably heard it said so often that you think it’s overhyped – the cold, psssht – but listen: you underdress at your own risk. It’s not the initial blast that gets you, but the slow seep: how cold burrows into your coat, then down jacket, then sweater, then baselayers, then undershirt. When it gets to your skin, you’re done. Nothing you do will make you warmer. Each break you take, each cup of instant noodles you down, will just make the next five minutes outdoors all the worse. So, yeah, layer up, bring a scarf and hat, two gloves, line your shoes, and put on two pairs of wool socks. The socks and gloves are critical: one’s extremities are usually the first to suffer.

You’ll want to take the overnight train there and back. Note: both hard and soft sleeper tickets sell out fast, especially around this time, so you’ll want to order online as soon as they’re available, which is 20 days ahead of your travel date. Two days and one night is probably enough time to get a good sense of the city, an extra night won’t bore you. A good area to stay is near Zhongyang Jie (the pedestrian street), but you’ll need to book accommodations in advance. Around there, you can walk to Stalin Park, where there’s an icy wonderland with skating, tube slides, sledding, etc. You’ll also be within walking distance to Saint Sophia Cathedral on Sophia Square: 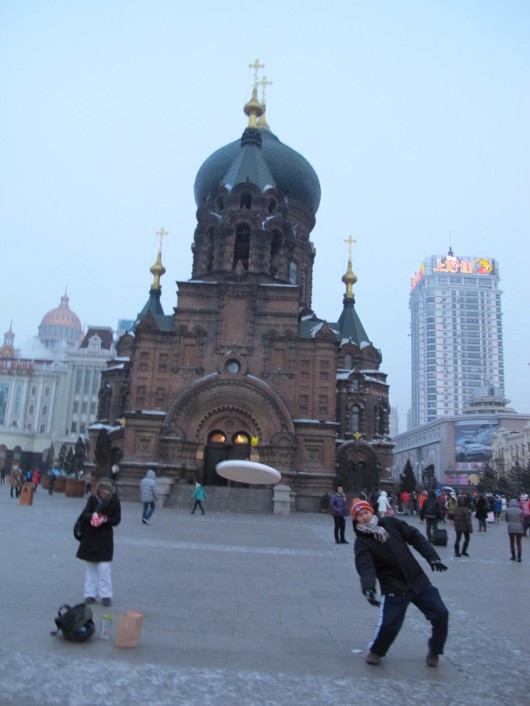 There’s a bar nearby called Blues, which Wikitravel describes thusly:

Dirty, crowded, and dangerous. Everything that is Harbin, Russians, Mongolians, Turks, Canadians, Brazilians, Koreans. Frequent staging ground for fights between Koreans and Mongolians or Russians fighting with Russians. The staff has also been known to get involved in fights or start them. Friday nights 10:30PM and afterward get really crazy when about 80% of Harbin’s foreign newcomers head out to Blue’s to party.

The area around Guogeli is also nice, as you’d be within walking distance from the Children’s Park, next to which is a nightlife district towered over by a neon-facaded club called Latte. Yes, Beijingers, there’s a Latte in Harbin, too, and it’s wonderful. On the Saturday night I visited, there was no cover — but Russian burlesque dancers bopping to American 1920s jazz music, yes.

Other good hangouts include Sky Bar, across the street from the Harbin Institute of Technology (which has its own subway stop), owned by a dude from Arizona. A few blocks from that is Harbin’s famous hangout, The Box — a nightclub — which is on the same floor as its sister bar, called Dox. The bouncers there are exceptionally condescending, though why wouldn’t they be?

The Snow and Ice Festival (technically: Snow Sculpture Art Exhibition and Harbin Ice and Snow World) are actually two different things, both requiring tickets. The Snow Sculpture Art Exhibition costs 240 yuan, and the Ice Festival — the main event, as it were — costs 300. People say you can get in for half-price with a student ID, but there are limitations: graduate IDs don’t work. I wouldn’t recommend carrying fake IDs, either. If you show an expired ID, please make sure the expiration date isn’t written anywhere, as the people who work there are adept in English — and serious about their jobs. We saw, in the line leading into the Ice Festival, a young girl maybe about five years old get denied entrance because her parents bought her a half-price ticket with a preschool ID. The family had to go back to the ticket counter and pay full price for her. Talk about loss of face.

Are the parks worth it? If a binary answer is required, then yes. I realize 540 yuan is a lot — much more than it should be, if we’re being honest — but how likely are you going to visit Harbin again? The snow park should be reserved for the daytime, as you’ll see some sculptures that you can convince yourself is international art of exceptional quality. (For snow, anyway.) Yes, you’re supporting art — money well spent! The ice park is fun because of the free slides and spectacular views, and lights. And because you’ve probably seen pictures of it on CNN. Again, strictly speaking, 540 yuan really is too much, but considering the quality of these places and the publicity they receive every frickin’ year, 540 probably is the fair market price.

Bringing me to this point: the snow and ice festivals truly are international in this most important sense: they maintain high standards. The queues are orderly, and outside, I’ve never seen so many traffic cops actually doing their jobs. One of my travel companions, Geoff — who took the pictures that accompany this post — mentioned that he encountered more English-speaking locals in Harbin than Beijing. That might not be strictly true, but you get what he’s saying: Harbin is a friendly, first-class town (if not exactly first-tier by China’s definition), and it cares about maintaining that reputation.

We skipped the Ice Lantern Venue and the aquarium. Those who’ve been, feel free to make a case for going.

But an absolute can’t-miss is the Siberian Tiger Park, a ticket to which is only 90 yuan. (You have to pay 10 extra for a guided tour.) Watching tigers eat live chickens is endlessly awesome. (Even if you don’t pay for the animal yourself, someone nearby likely will.) Feeding shows commence at 11 am and 2:30 pm. Geoff, that man again, actually touched a tiger’s paw. This one: 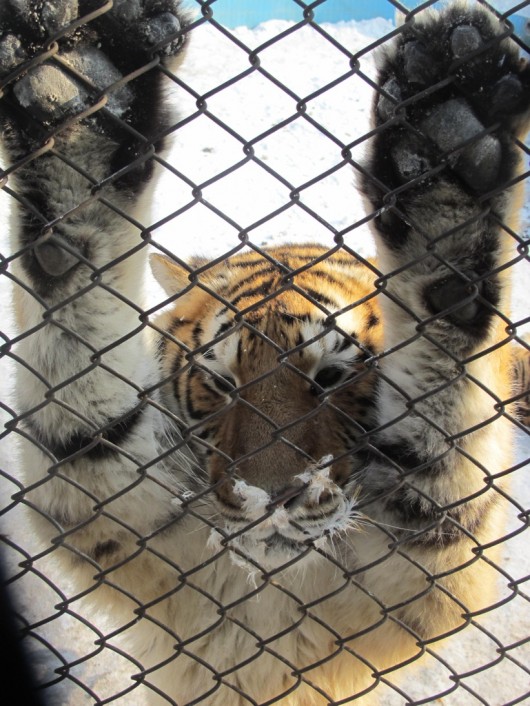 They even have pumas, though, um, they probably shouldn’t. This poor guy looked miserable: 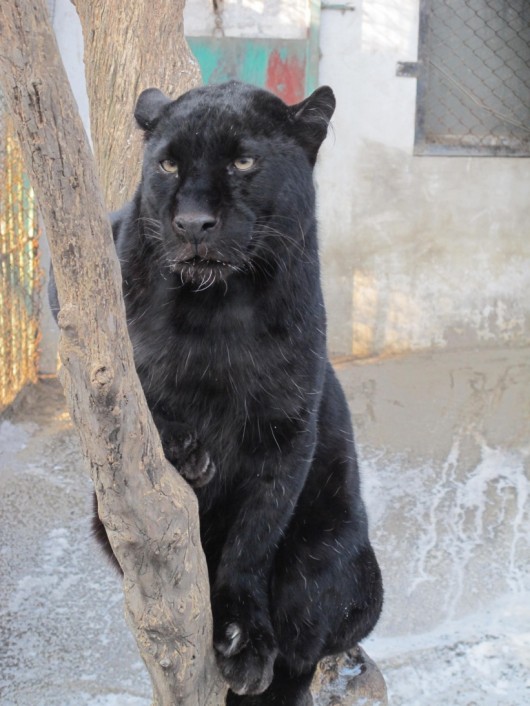 We were able to see the tiger park, snow and ice parks all in one day, and felt rushed in none of them.

Hiring a driver is recommended, at least for the parks. It’s not that you can’t get to these places via cab, but getting out is tougher. The last thing you want, while freezing, is to fight fellow tourists for cabs, or to walk to bus stops and wait.

You’ll want to sit down in a hotpot restaurant (any will do). A barbecue dinner is recommended. Drink Harbin beer — though your opinion of it likely won’t change. We saw a lot of California Beef Noodle King USA and Sushi Noodle restaurants, but chose not to dine in them.

So, get out there, experience the cold, skate a little, buy a popsicle (the famous one on Zhongyang Pedestrian Street — you’ll find it, because everyone nearby will be eating one), and let us know how it goes. After a weekend in Harbin, the Beijing winter will seem mild by comparison.

Oh, and see if your pictures come out any better than these: 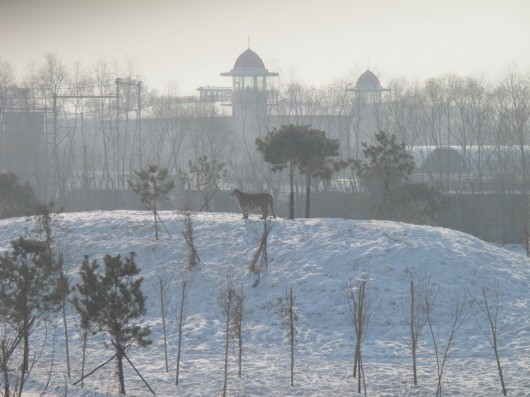 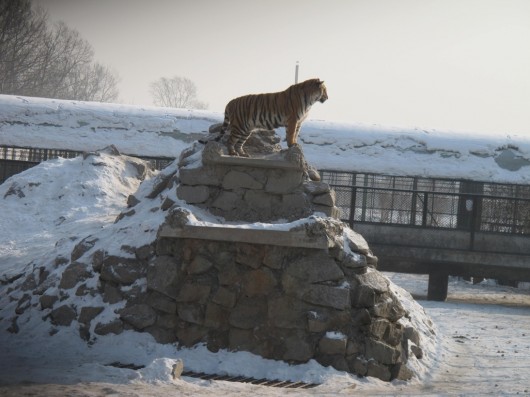 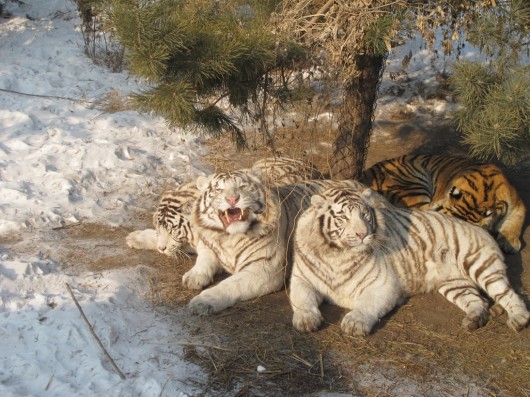 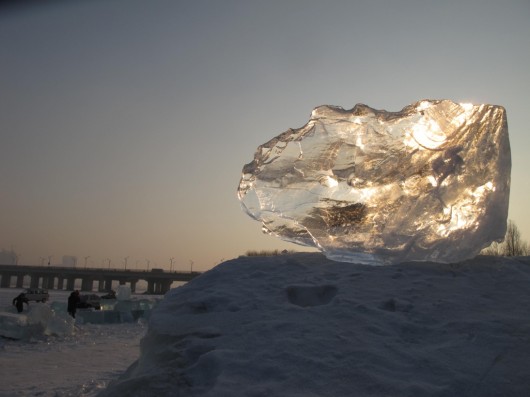 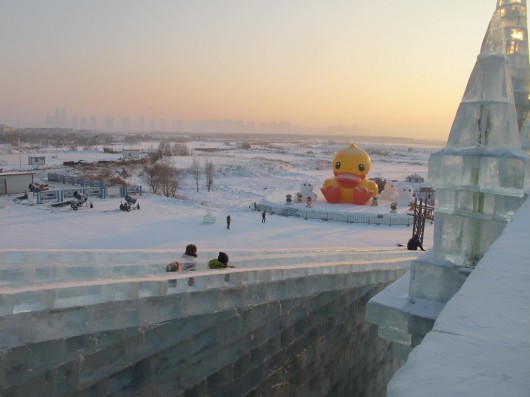 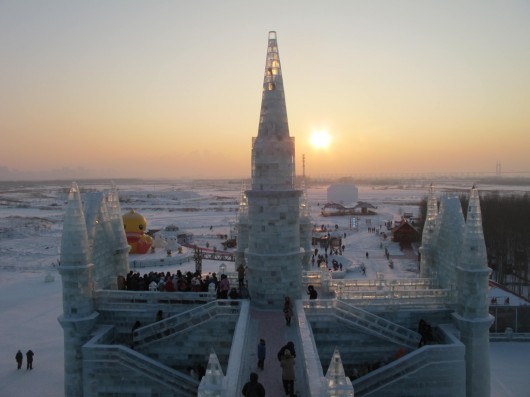 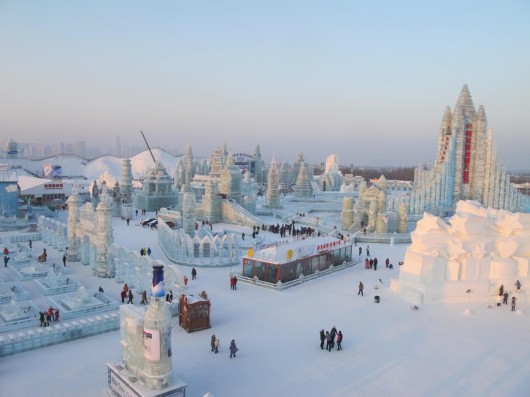 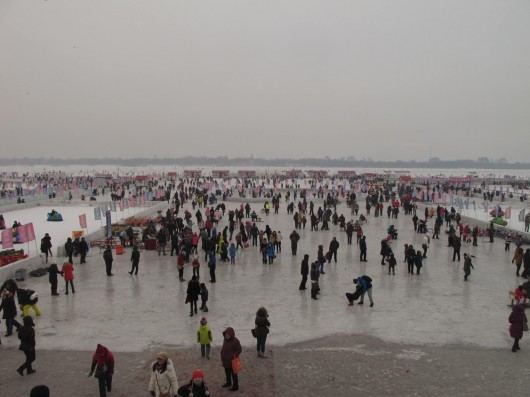 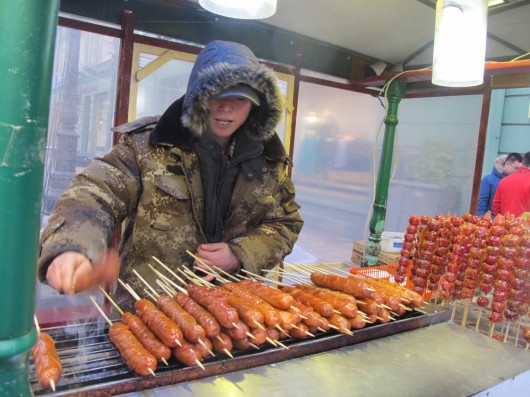 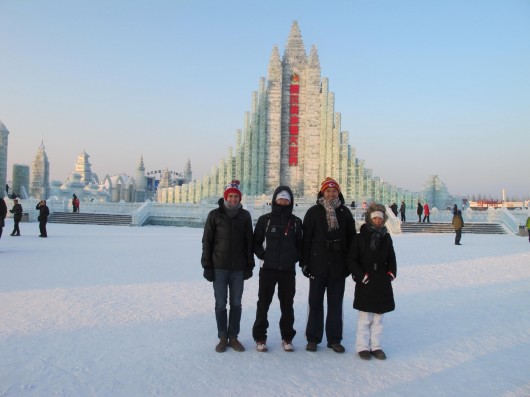 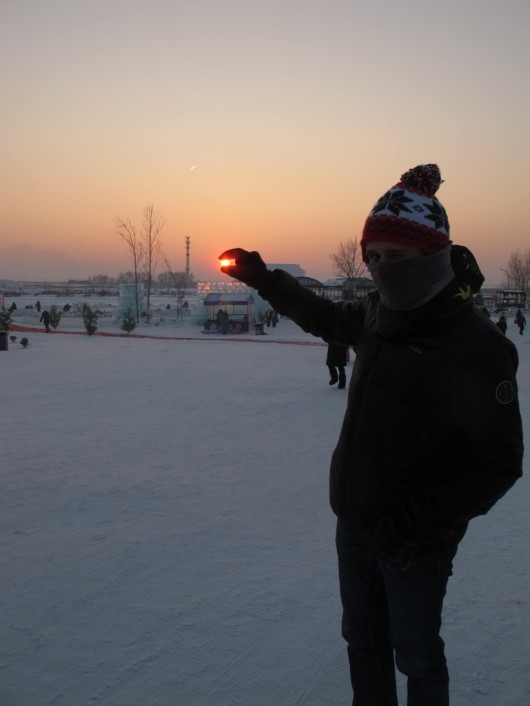 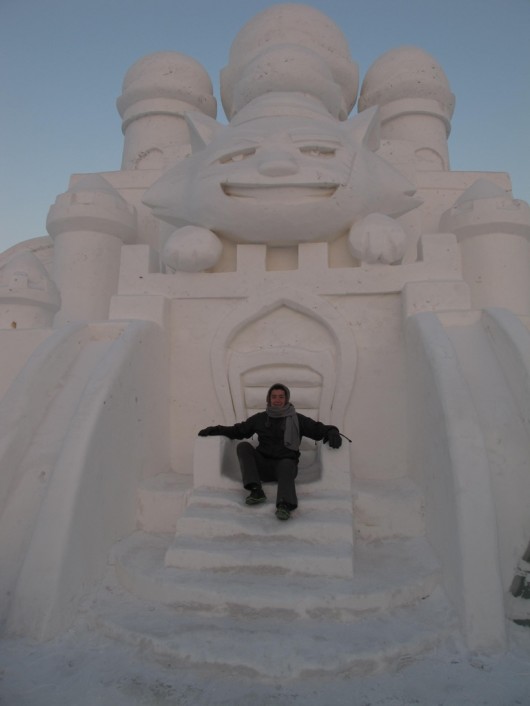