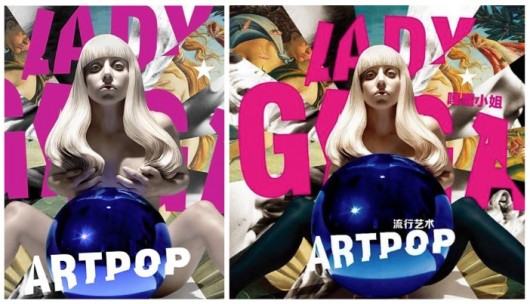 After two-plus years, Lady Gaga has been removed from China’s musical blacklist, which means she can now perform on the mainland. Her third studio album, ARTPOP, has also been approved for release, as the singer herself announced in a tweet: “I’m so excited!!!! The Chinese Government Approved ARTPOP to be released in China with all 15 songs!”

Look at the side-by-side images of ARTPOP – China and ARTPOP – everywhere else, above. Black stockings and bigger blue rubber ball for the Chinese audience. Welcome to the land of artistic censorship.

While we don’t know how the “Goddess of Love” will react, an executive at the singer’s Chinese record label, Universal Music, told Sinosphere last week:

Changing the cover of “Artpop” must be a way to “avoid risk” during that process with “a compromise,” the executive said.

Compromise. The first of more?

Please note that the issue here is not, specifically, how much cleavage an album cover should allow, or whether stockinged legs are less provocative than bare ones. Very simply, how many compromises must artists — Lady Gaga in this instance, though we can ask for hypothetical others — make before it’s no longer worth it? And who really loses, then — them, or China?

You know my answer. Feel free to play devil’s advocate.