That DPRK team was apparently called the Torch. Afterwards, players lined up and mixed up the squads, like “in a primary school,” with captains picking players. (Who was picked last???) They played another 20-minute game, Green vs. White.

That game was actually much better, showboating, showing off, alley-oops, slam dunks, and that kind of that, so that was a really entertaining game.

But the most entertaining moment for “most of the North Koreans present” was undoubtedly at the beginning, when Kim Jong-un appeared with his wife.

…And of course, as is their way of doing things, all the local people went crazy, so several minutes of cheering and saluting, shouting manse, meaning “10,000 years, long life,” until basically Kim Jong-un told everybody to sit down and the game began.

Actually Dennis Rodman gave a speech at the beginning of the event, which was clearly improvised because he didn’t seem particularly well prepared, which culminated in him leading a mass sing-along of Happy Birthday to You to his friend, Kim Jong-un. So as you might imagine, it was a bizarre and unusual occasion that won’t easily be forgotten.

Private cameras were apparently not allowed inside Pyongyang stadium, but Sky News managed to capture the above footage, which is amazing. AP reports that 14,000 people attended the game, and also has this picture: 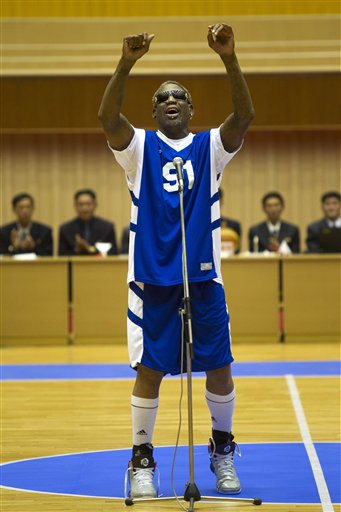 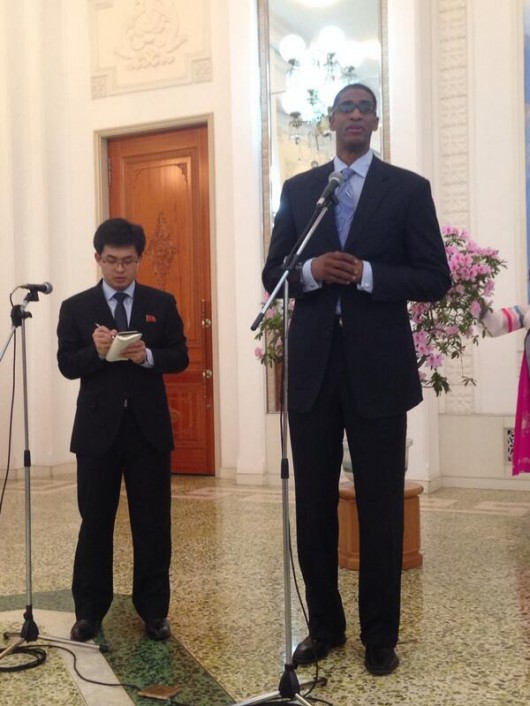 The NY Times’s The Lede blog has more, plus videos. Stuff like this:

I was lead blocker…. pic.twitter.com/SGPT7bVs4Z