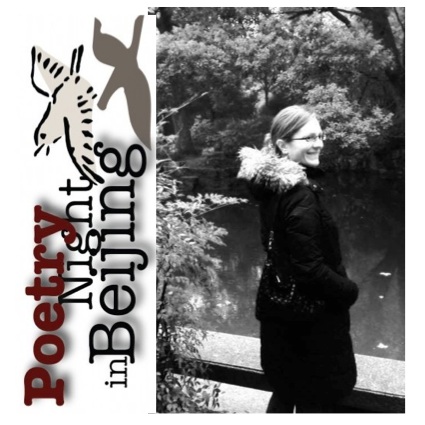 We’re rapidly approaching the March 1 submission deadline for those interested in reading at Poetry Night in Beijing, a curated community event on March 16 that’s part of the Bookworm Literary Festival. If you’re wondering whether you should submit, please heed the advice of Eleanor Goodman, one of our curators: “Submit! There’s nothing lonelier than a poem sitting unread on a laptop or in a notebook.”

Goodman is a writer and translator whose work has appeared in a variety of publications. Her translations of Wang Xiaoni will be published this year (The Selected Poems of Wang Xiaoni). She’s currently in Beijing on a Fulbright Fellowship.

We recently had a chat over email about poetry, translating, and our March 16 event (jointly hosted by Pathlight).

Also see: An Interview With Helen Wing, Author Of “Archangel”

We’ll begin with an impossible question: what is poetry?

EG: That is an impossible question. I’d be very hard pressed to define poetry, although like the Supreme Court and pornography, I know it when I see it. The older I get and the more I read and write, the less I feel we should or can dictate to others the confines of a given craft. Having said that, the poetry I gravitate toward has a keen sense of rhythm and music, some sort of emotional content, a fresh use of language and a strong intellectual underpinning. These things can come in many forms and guises. Do you have a definition for poetry?

You covered the basics. I’ll just add that one aspect of poetry I really admire is its range. An able poet is able to traverse the cosmic and quotidian in the thin space of fifty pages, i.e. the length of a collection. Hmm… maybe one could even do it in eleven words? To borrow from the American poet Virginia Hamilton Adair and the Tang Dynasty poet Li Bai: Did the parturition of nothingness give rise to all this frost? Also, poetry’s basic function as expression – articulating the inexpressible, de-familiarizing the familiar, helping us see the familiar, etc. – should make it essential.

But is it? Is poetry fulfilling its duties / potential? Can it, in our day and age?

EG: Poetry’s role is a hard one too. I think it can play many roles, or none at all. To some limited extent, poetry is that which can’t be pinned down. So I’m reluctant to say it has “duties.” On the other hand, people who dedicate themselves to writing poetry (and I think that’s a very small group of people) are trying to communicate something. A writer like Han Dong or Ashbery or Yan Li is trying to get at something very serious with absurdism that sometimes seems slight. So perhaps I should say that there is a duty, and an extremely important one, but I wouldn’t want to go about articulating it outside of a poem. As for this day and age, my father always liked to tell a story about archeologists discovering a new tattered scrap of Egyptian papyrus. After struggling to interpret the ancient, faded script, they figured out it said something along the lines of, “Well, the world is going to hell in a handbasket: children don’t respect their elders and the women wear too much makeup.” This is obviously apocryphal, but the point is sound. There’s nothing new under the sun. If poetry has ever had any power in the real world – and it has – it has that same power now.

How or why did you begin translating poems? From Chinese, no less?

EG: The Chinese came before the translation. I first dipped my toes into translation in a class I took with Rosanna Warren when I was getting my Masters in Creative Writing. At that point, I was just back in the States after living in Shanghai for more than a year, and she encouraged me to try translating from Chinese. I was dubious, but took my best shot at translating some Wang Wei, who remains one of my favorite poets. I did a miserable job, but it inspired me to continue to translate as a way of learning/practicing Chinese. Later, my close friend and sometimes-collaborator Wang Ao (poet and translator extraordinaire) introduced me to the world of contemporary Chinese poetry and I was immediately hooked. I like to translate the work of people who are still alive and kicking.

Has translation made you more aware of how you write? Does thinking in two languages help your writing, and if so, in what ways?

EG: Translation has had an enormous influence on my own poetry. Chinese is structurally very different from English, and the norms of Chinese poetry are different too, so I’ve consciously (and surely unconsciously) imported some of that into my own work. In particular, I’ve gotten very interested in the lack of punctuation in a lot of contemporary Chinese poetry. Merwin does that too, but few other American poets write straight-up sentence-based poetry that relies on line break and emphasis instead of punctuation. It opens up a lot of new space, at least for me. It’s cliché now to say this, but I do think that writing, thinking, living in another language brings out a different personality that otherwise doesn’t have a chance to emerge. At least that’s true for me.

The trick is to stay sharp and current in your native language while mastering a second. I don’t have any tips at all in how to do that. Wait, I do. Read poetry.

EG: I couldn’t agree more with the admonition to read poetry. But I also think that for many (if not most) poets, there isn’t a danger of losing touch with their native language despite being in a linguistically foreign environment. I once asked Bei Dao if living in the United States for so long made him feel estranged from Chinese, and he said it made him feel like he had a more intimate relationship with his mother tongue, not less. The same is true for me. Living here in Beijing and operating in Chinese all day long only makes my love affair with the English language stronger. I know its soft contours and rough edges much better than I will ever know Chinese, no matter how many years I spend here.

I wonder: how does Chinese poetry differ from English-language poetry, and how are they similar? Are there any defining characteristics about Chinese poetry?

EG: This question is huge and I’m unqualified to answer it. But I will say this: the varieties of Chinese poetry that exist are as different from each other as Chinese poetry is from English-language poetry, especially when looking across a distance of more than a thousand years.

EG: In my experience, the Chinese poetry scene is quite close-knit and self-aware. That isn’t to say it’s not contentious, cliquish, and often catty – it is. But poets tend to know or be aware of each other, and to keep close tabs on what their contemporaries are writing. They also know who’s gotten a divorce, who won an Italian poetry prize, who’s building a house in Yunnan, who slept with whom at what conference, and so on. It’s full of gossip, nepotism, and guanxi-mongering. But the flip side of that is that everyone’s in touch with what’s going on and there’s some sense of common purpose at work. This is in sharp contrast to what I’ve seen in the States, where poets are spread out and nobody’s ever heard of anyone else unless he or she is a star.

Fascinating and worthy of a thousand-word essay. (By the way, that’s due next week, I’ll expect it in my inbox.) How are Chinese poets viewed among the public? Who are some of the leading voices, and do they have more or less influence than their counterparts in, say, the US?

EG: In the 1980s, being a poet was a big deal. In the Tang, you had to write poetry to get a government post. Today, it’s sort of an embarrassment. I’ve met several accomplished poets with day jobs who would never tell their colleagues that they write poetry. Parents tend to discourage their kids from spending too much time on poetry. Poetry and poets are not in the public space the way they once were. Still, I’m not sure that’s a bad thing. Do you have thoughts about that? I’ve noticed that Beijing Cream rarely if ever mentions poetry – is that a sign of something?

I’d love to incorporate more of it. I wrote a silly villanelle here, and appended Adrienne Rich’s masterful “The Ballad of the Poverties” to a post about nail houses, but more suggestions are always welcome. I’d be happy to run a poetry blog if I thought I was qualified.

EG: I really admire the way you’ve incorporated Rich’s poem into your post. I think we need a lot more of exactly that: poetry as part of the common conversation. In some ways I think these poetry blogs are a kind of sequestering. They have their place, but let’s have poetry all over the place, preferably where it “doesn’t belong.” Don’t you think?

What do you hope to see at the literary festival event on March 16? Do you have any expectations?

EG: I’m eagerly expectation-less. Still, I’m very curious what kind of crowd will come out for this event. Are there English-language poets hiding in obscure dark corners of Beijing who only creep out occasionally in the middle of the night to drink at Amilal? Will they come to the Bookworm? As the organizer of this event, what kind of crowd are you hoping for?

Honestly no clue. It’s a curated community event – not a “contest,” as Canaan Morse has rightly pointed out – so I really do hope it can serve as a meeting ground for poetry enthusiasts and anyone interested in writing / THE ARTS / community events / meeting cool people. We will be drinking whisky afterwards, so you Amilal folk have no excuse to not swing by.

EG: Thanks for confirming there will be whisky. And as usual, Canaan is right on the money. I despise contests, but I’m all for curation.

That reminds me: we’re still looking for poets who are willing / able to read their work at the event. The deadline is March 1. Any advice for people out there who may have poems they’ve written but are hesitant about submitting?

EG: Submit! There’s nothing lonelier than a poem sitting unread on a laptop or in a notebook. The worst that can happen is that it’s read by three very savvy readers who love poetry, and that’s not too bad.

EG: Thanks for the opportunity – here’s a recent poem about the Henan countryside that I hope answers the question of how I define poetry and what I think its duty is.

In This Village (II)

In this village live old men and children

feed the three goats and family of rabbits sold for meat

down the central lane where water collects in ribbons of mud

and dogs go busily along their way

a nil question that points its finger at the asker

I want to ask the dogs as well and the roosters

and the plump rabbits who will soon be slaughtered

all of their dialects are foreign to my ear

I understand only the dark stare of the sockets

of the calf’s head set on the table at lunch

saying there is nothing left to save here

though once there was and someday might be again

Eleanor Goodman is a Fulbright fellow, Harvard Fairbank fellow, poet and translator. She can be reached at eleanor@eleanorgoodman.com

One Response to “Poetry Night In Beijing: A Conversation With Eleanor Goodman”