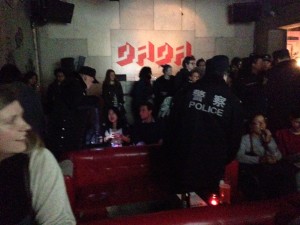 Police mounted a surprise raid on Dada Bar on Wednesday at 8:30 pm, where the group “Beijing Creatives” was hosting a speaking event where, among others, a photographer, a book designer, and Beijing Cream’s Anthony Tao were giving short talks.  They first pulled aside people who looked Chinese and asked for their ID cards and passports, and then photographed Asian-looking people who could not readily produce them.

Eric Jou, a blogger for Kotaku, spoke to police who told him that it was a “routine check” and that “foreigners should always carry their passports.” Chinese law enforcement is empowered to do such random checks, and traveling without a passport is an offense.

Sarina Li, who attended the event, spoke about her experience:

We were there, we were listening to the presentation and all of a sudden there were cops. I saw they were there out of the corner of my eye, but I wasn’t initially worried. But later I knew they would come for me because I look Chinese. They put a flashlight in my face and asked if I had a passport. At first I tried to use Chinese to explain myself, but they couldn’t understand. Then someone next to me deflected the attention by stepping in, showing his ID, and explaining the situation. I didn’t feel too much in danger because I felt like it was scare tactics. Still I felt like I should leave.

Police were not guarding the side door, and a number of people left from there. Those of Asian descent who stayed were noted and their photographs and information were recorded. After police left, the talk actually continued, albeit with a somewhat diminished audience. (Ed’s note: the police arrived soon after a scheduled 10-minute intermission began and didn’t leave until about 40 minutes later.)

They just came in to do a check. They checked our fire extinguishers to make sure they are in the right place, but they were ok. We have all our permits up to date. I’m quite happy the police come down to check in on things like this. China needs to keep on top of the safety.

When asked for more detail, Ohlsson told us that “they haven’t really been in the bar like this for a year and a half now.” When asked about why they checked passports, Ohlsson said that he was guessing that it was “a top-down thing,” and that “a lot of this is going on.”

This kind of event isn’t unprecedented, and there is a chance that this really was a routine inspection. Still, it seems amazingly ineffective and a PR failure to pull out Asian-looking people and try to scare and threaten them. If it’s true that the police are really targeting small Wednesday gatherings of artists and photographers, then the authorities have much more misplaced anxiety and spite than I had previously thought.

Ed’s note, 2/20, 5 pm: As annoying as the police were, it’s important to note that they weren’t targeting specific individuals or anyone involved with Beijing Creatives. That they seemingly picked out Asian-looking bar patrons was curious (though they also asked a few Caucasians for their passports and registration papers, even phoning — presumably — a local Public Security Bureau to verify at least one person’s info), and certainly the timing was unfortunate (at intermission of a well-attended event), but no one got in trouble (to the best of my knowledge).

As for Ohlsson’s comments: I’m inclined to believe that more of these “routine checks” are indeed happening, at least around Dada’s neighborhood. Still, we’re not sure why the cops needed a half-hour last night to check fire extinguishers, harassing bar patrons along the way. -Tao