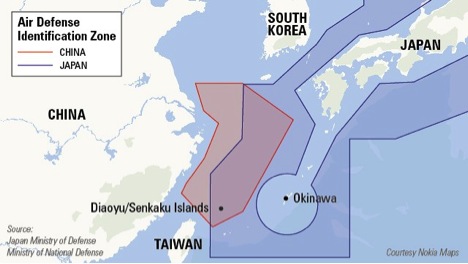 For those worried about peace and stability in East Asia, there is plenty to keep you up at night: an international pariah armed with nuclear weapons under the apparently tenuous control of a young adult of questionable maturity; messy historical relations between regional powers; and territorial disputes that tie up political capital, inflame public opinion, and increase the chance of hostilities. If it’s Tuesday, there must be a flare-up in the Senkaku/Diaoyu Islands.

Last November the Chinese promulgated one more policy to worsen the insomnia of security experts: The Air Defense Identification Zone (ADIZ) in the East China Sea. Definitions, here, are important. As The Atlantic‘s James Fallows stressed, “all four words in its full title” mean something. Taken together, they don’t create a no-fly zone, but instead “create an area where the relevant authorities have a right to know who is flying, and where they are going.” Importantly, Fallows added, the ADIZ  “doesn’t necessarily mean that flights are going to be challenged or interfered with.” Other countries, including the United States, have these zones, too. The ADIZ itself might be innocuous.

Or — maybe not. Tai Ming Cheung, director of the University of California Institute on Global Conflict and Cooperation, argued that the key factor was not the existence of the zone itself but the “PLA’s lack of operational experience, overlapping ADIZs, and unclear rules of engagement could lead to accidents that could easily spiral into dangerous incidents.” Danger arises from complexity, lack of precedent, and lack of training. Stephanie Kleine-Ahlbrandt, director of Asia-Pacific programs at the U.S. Institute of Peace, agreed with this assessment and extended it. The truly worrying aspect of the ADIZ was how it “will further empower actors within China to push for bolder action in the contested territories in the East China Sea.”

After the initial announcement of the ADIZ and the decision by the United States to go forward with a previously scheduled training flight of B-52s, the remarkable thing about the ADIZ is that it has thus far been unremarkable. The difficult thing about thinking about China — or any place, really — is figuring out what is really important and what isn’t. There is tons of news happening each day but it is hard to determine, especially on the first go-around, if today’s news will be historically significant.

To demonstrate, let’s examine flight identification procedures in China during the Nationalist Period. If you haven’t heard of these regulations before, well, that’s kind of the point.

As the KMT consolidated power in the late 1920s, they set about codifying their rule. Establishing a government, at a basic level, means creating laws and procedures for a number of issues that aren’t necessarily important during the fight for power. A policy on the identification of foreign aircraft is not going to drive people to join, or leave, the revolution. But when running a government, that is exactly the kind of policy that needs to exist.

In 1929, the American government asked its diplomats in China to figure out what, if any, rules existed for foreign aircraft in China. Edward Cunningham, Consul General in Shanghai, reported back the following provisional policies in June 1929.

First, whenever a foreign airplane visited China, the foreign minister or local consul of the country had to notify the Chinese government, which would grant special permission to the plane to fly in Chinese territory. More specifically, the foreign representative had to provide the object of the flight, where the plane would enter and exit Chinese airspace, the places the flight would pass through en route to the destination, the names of all crew members as well as the model and make of the plane itself.*

With this information submitted, the Chinese government would then approve the route and itinerary. Route approved, the plane was not to deviate more than 20 kilometers to the right or left of the sanctioned route. Upon landing in China, the plane was to be subject to inspections “by representatives of the Chinese government when it ascends and descends.” Around cities, planes were not supposed to fly at low altitudes, “thereby endangering the lives and property of residents.” Planes were also not allowed to “scatter things from above.”

This all sounds stringent but reasonable enough, especially given that aviation around the world, and especially in China, was still a new thing. In fact, reporting back to Washington, the American consul at Shantou in Guangdong wrote that he could find no information on provisional regulations and that only one airplane had every been seen overhead. The only thing that complicated matters was that different consuls in different parts of China relayed different information.

The point here is not to reason by analogy — there are immediate and obvious differences between these provisional regulations and last year’s announcement of the ADIZ. Instead, the purpose is more hopefully subtle. When news breaks, it is difficult to guess — let alone know — its ultimate significance.

In histories of the 1930s, airplanes and aircraft identification do not merit much attention. One exception might be the famous flight that Madame Chiang Kai-Shek, Soong May-Ling, and Soong’s elder brother, T.V., took from Nanjing to Xi’an in order to extract Chiang Kai-Shek from captivity, thus creating a united front between the KMT and the CCP to fight the Japanese. No real diplomatic or geopolitical incident, though, developed out of the rules and regulations governing the flight of foreign aircraft in China. In a similar vein, it is possible to imagine future history books devoting no space to the creation of the ADIZ in the East China Sea. If nothing else, let that thought help you sleep through the night.