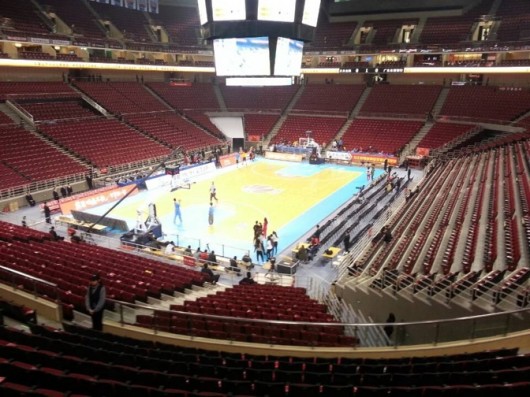 Nick Bedard of Basketball Buddha is courtside on press row at MasterCard Center, aka Wukesong, for tonight’s Game 4 clash between the Beijing Ducks (23-11 regular season, No. 4 in standings) and Guangdong Southern Tigers (30-4, No. 1). Thanks to an epic performance from Stephen Marbury on Saturday in an overtime win, Beijing currently has a 2 games to 1 lead in this best three-out-of-five series. We now join our regularly scheduled Bedard in progress. (Newest updates appear at the bottom.)

4:45 pm: I’m told by Ducks ticketing staff that tickets are completely sold out. Scalpers, who are at every corner from Wukesong subway station to MasterCard Center, have a limited quantity and are selling tickets for triple the price of face value. If you’re going to go the game without a ticket, don’t think that the first scalper you see is the best deal, shop around a bit.

5 pm: I’ve been informed by various sources that Guangdong Southern Tigers head coach Jonas Kazlauskas is missing in action. As a matter of fact, he is NOT EVEN IN BEIJING!

5:30 pm: They’ve opened the gates for general admission. Every single person is going through airport-type security. 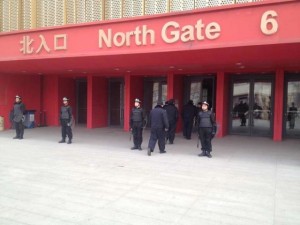 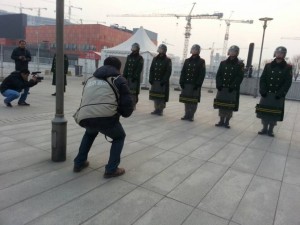 6 pm: Nothing really happening. Fans are slowly but surely getting past intense security and into their seats. Randolph Morris is first out on the court, working on his smooth jump shot: 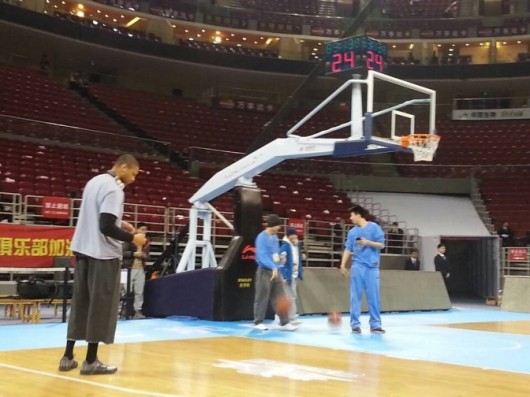 I’m going to get an iced tea from the KFC that sells no chicken.

One more note: Beijing sets up “shabi police” in every section of he arena to prevent the word shabi, which literally means “stupid cunt” but probably can be translated better as “asshole,” from being said. Here are some shabi police getting ready: 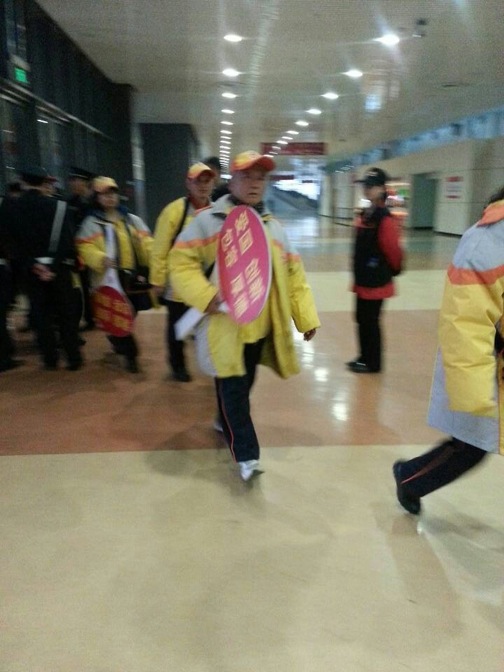 7:30 pm: Security is trying to kick everyone out of the media section and knocking everyone’s laptop/camera over. These guys run a tight ship. (They want to show their boss that they are actually doing something other than standing around and watching the game, which is what they do anyway.)

On the floor (trying to look over the shoulder of all of these security guard), both teams are warming up.

Still no sign of Guangdong’s head coach, Jonas Kazlauskas. The official word is that he’s out with an “ankle injury” and did NOT travel with the team. Is it a cover-up? He is under-performing in this series. Life in the world of Jonas is not going so great right now.

An assistant coach wearing a purple suit that would make Ron Burgundy jealous will be leading the Guangdong squad tonight. He has so been keeping that suit in his closet for this very moment.

Ed’s note: The game is scheduled to be on CCTV-5, but that channel is currently showing the final minutes of an AFC Champions League match between Shandong Luneng and Cerezo Osaka. Chinese media is stupid.

7:40 pm: It is packed in here from bottom to top. This place is electric.

What it might mean to have a first-time coach on the sideline in the biggest game of the season: the refs may lean more toward the experienced coach who knows how to work the officials, which in this case is Beijing’s Min Lulei.

Jonas Kazlauskas’s absence has a sense of him quitting on your team.

7:53 pm: Officially a sell out. I cannot spot one empty seat.

3:07 left in first quarter: Beijing’s coach just popped a vein on his forehead after Guangdong’s Yi Jianlian grabs an offensive rebound and draws a foul. Makes two free throws to push Guangdong up 16 -12.

:57 left in 1st: Stephon Marbury, driving to the bucket, is kicked in the shins and falls to the ground. The crowd erupts in “shabi” chants, and not even the shabi police can stop them. A flagrant foul is called on Wang Shipeng.

Marbury sinks two free throws, gets the ball back, and drills a three-pointer.

P.S. That was a very, very dirty play.

At the end of the first quarter it’s 25-20 Guangdong. Stay tuned for the second quarter, when Randolph Morris takes his turn on the court.

Anthony: how fat does li gen look in person
that dude’s bad at basketball, right?
Nick: He’s a bulldog
I once witnessed him doing pushups an hour and a half after a game.
The guy does arm curls on the bench
…
Li Gen hits a three
and blows a kiss to the fans. A girl beside says “he’s so cute!”

Guangdong’s Wang Shipeng is being mercilessly booed every time he touches the ball. You don’t mess with Beijing’s local hero (Marbury).

4:35 left in 2nd: Guangdong’s Dong Hanlin just picked up his fourth foul. Guangdong has two other players with three fouls each.

A picture to share: Marbury is protecting his head with a simple bandage on the back: 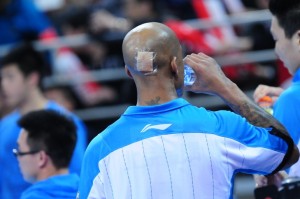 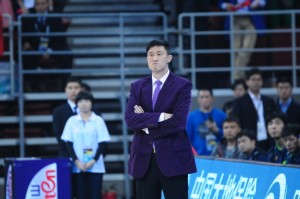 8:30 pm: At halftime I walked over to see our friend Karan Madhok, aka @Hoopistani, who said, “I noticed during the playoffs that the cheerleaders step their game up. They are on another level tonight. Wow!”

That was his answer to my question, “What did you think of the first half?”

(We know where his head’s at.)

From my point of view, all cheerleading aside, the game was up and down. Guangdong is choosing to live and die from the three-point line. They are not going to Yi Jianlian inside, but are instead working the ball around the perimeter.

As for Beijing, the Ducks scrapped their way through that half quarter. It wasn’t pretty, but it was efficient.

Each team can play their foreigners for a combined six quarters. Beijing chooses to play Marbury during the 1st quarter, Morris during 2nd quarter, and then both, together, for the entire second half. This bodes well for Beijing, which has been down at halftime in every game this series but still has a 2-1 series lead.

Guangdong opens the second half on an 8-0 run. The Ducks are unable to grab a defensive rebound to save their lives. One of their players just — instead of easily grabbing the basketball — tried to bat it to his teammate, and of course Guangdong ended up with it. A bucket followed to make it 73-55.

While the language police are hard at work, the fans continue to yell “shabi” at Wang Shipeng and the referees. 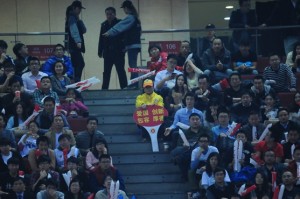 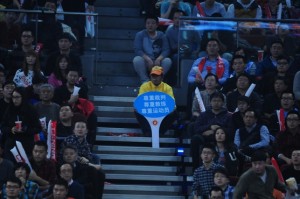 With 3:46 remaining in the 3rd quarter and Beijing down 18, coach Min calls a timeout and the in arena the DJ plays “I want to know if you will be my girl” by DJ Otiz to try and lighten the mood. Great attempt but poor results.

Morris looked extremely tired during those last few possessions of the third quarter, and it hurt Beijing on rebounds. Guangdong has about 20 offensive rebounds.

Guangdong is only up 11 heading into the fourth. Its biggest lead was 18.

Every basketball fan should watch the CBA someday to understand how fucked up it is. Marbury is an NBA player on court with high schoolers.

Ed’s note: Li Gen continues to be a waste of space. A fat amount of space. He’s kind of fat.

6 min left in 4th: A Marbury bandage update: he has removed it. Guangdong up 9.

3 min left: The turnover battle is close enough, Beijing with 11, Guangdong with 13.

2:54: Marbury spins around his defender, Royal Ivey, and converts an and-1 to bring Beijing back to five. I don’t want to overemphasize this, but Marbury is Beijing’s basketball team. Randolph Morris hits some shots, but it’s Marbury who is the leader in every way.

9:45 pm: And it’s over: Guangdong 109, Beijing 101. For the first time ever, Guangdong won in Wukesong. I think the Ducks came into this game with too much confidence. It seems like they forgot who they are playing.

Guangdong is the best team in China — the defending CBA champions — for a reason. I noticed the Ducks took a few possessions off and lacked discipline. Stephon Marbury played a good game; there is no denying his will to win, but he is going to need other guys to step up. Morris led all scorers with 34 points and Marbury added 31; no other player on Beijing’s squad had more than 9 (Ji Zhe and Di Xiaochuan). Guangdong outrebounded Beijing 54-41 and shot 50 percent from beyond the arc (12 for 24) compared to Beijing’s 33 percent (8 for 24).

Guangdong is going to have a lot of in-house problems with the sudden disappearance of its head coach, but Beijing coach Min Lulei will have to work some magic if he wants a road victory.

The deciding Game 5 is Thursday at 7:35 pm in Guangdong.