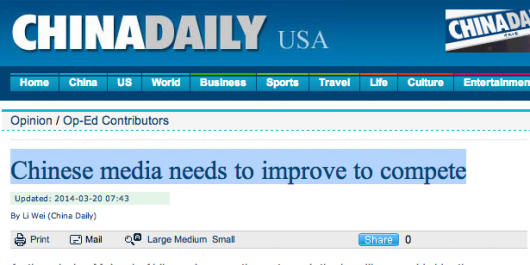 “Chinese media needs to improve to compete.” -China Daily headline on an editorial that also appears (in Chinese) in Dongfang Daily

The singularity is forthcoming.

As the missing Malaysia Airlines plane continues to grab the headlines worldwide, the gap between Chinese and Western media in covering the incident has become ever more evident. During the first few days after the aircraft vanished from civilian radars, Chinese media criticized Malaysia Airlines for delaying the release of information, while their Western counterparts began to question the Malaysian government for suppressing crucial facts.

Translation: Chinese media is feckless; they wait like pomeranians to be hand-fed information from their favorite government mouthpiece; they hem and haw and hedge to make sure only non-offensive things are said, are overly sentimental and reliant on anecdotes.

The country’s development of journalist soft power still has a long way to go, so do Chinese journalists, who need to do a better job in ferreting out the truth and informing the public.