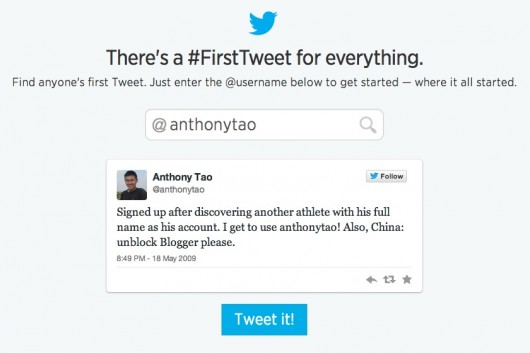 We just discovered this pretty neat Twitter tool that lets you find the first tweet of any user. It’s easy to use: just put in a username, then voila – get taken back in time to a day when Twitter wasn’t blocked in China. It got me thinking: who here were among the earliest Twitter adopters?

(That’s a fairly uninspired question, admittedly, but if you find any good first tweets, let us know.)

Some first tweets of those with five-digit followers:

Deciding to get in the habit of Twittering, against all better judgment. — Kaiser Kuo (@KaiserKuo) January 22, 2008

Parents of schoolchildren who died in the Sichuan earthquake a year ago still demand justice from Chinese officials. http://bit.ly/lhB08

Kro’s Nest on Gongti: closed a few days ahead of original plan. Kro says will reopen on Aug 24 and that his new place will open July 24. — beijingboyce (@beijingboyce) July 18, 2008

China’s predicted growth has risen from 7.2 percent to 8.4 percent, according to the World Bank http://bit.ly/4Fjhd2

And because you were wondering: