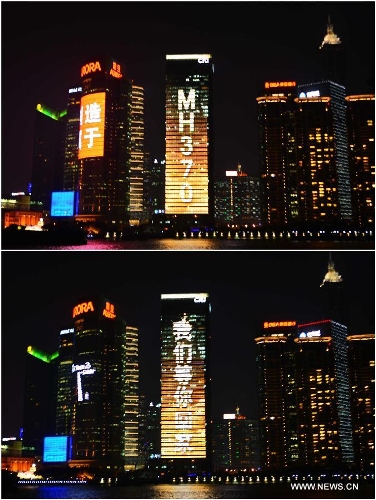 Via Global Times: “‘MH370, We Are Waiting for You Back Home’ displayed on a skyscraper at the Lujiazui Financial District in Shanghai, East China.”

The mystery deepens. “Two sources said an unidentified aircraft that investigators believe was Flight MH370 was following a route between navigational waypoints – indicating it was being flown by someone with aviation training – when it was last plotted on military radar off the country’s northwest coast. // The last plot on the military radar’s tracking suggested the plane was flying toward India’s Andaman Islands, a chain of isles between the Andaman Sea and the Bay of Bengal, they said.” (Reuters)

The inevitable finally comes: censors get to WeChat. “On March 13, users visiting some of the highest profile WeChat public accounts — including individuals like legal scholar Xu Xin, self-media like Consensus Net and Elephant Magazine, and the WeChat presence of one of the accounts affiliated with Caixin, one of China’s top finance and political news outlets — found the accounts had been deleted with no apparent forewarning. Visitors attempting to access those accounts receive a message that the given account ‘has been repeatedly reported,’ and upon investigation has been shown to be ‘in violation of the rules, and all of its functions have been deleted.’ The message advises users to stop following the accounts.” (Tea Leaf Nation)

Jia Zhangke on A Touch of Sin being censored in China. “’It’s about intellectuals who have nowhere to go after the imperial examination system is scrapped,’ he said. ‘People have advised me to shoot a film that ends with the world getting better. It’s such a strange suggestion. I like to shoot the rain. Why do you want me to shoot the sun coming up? That’s a completely different thing.’” (WSJ)

Looking at the Streisand Effect of Chinese censorship. “Whereas most censorship alerts the user to its presence with blunt error messages, attempting to instill a chilling effect, this subtler method gives users the mistaken impression of having shared their views with their online followers when, in fact, their messages are only visible on their own computers. Thus, authorities can shut down discussions without raising the specter of netizens outraged that their posts have been deleted.” (ChinaFile)

This could be you! “Nominations for Friendship Awards (友谊奖) are due by April 18. The awards, granted by China’s State Administration for Foreign Expert Affairs, will be conferred as part of the celebrations for National Day (Oct. 1).” (US and China Visa Law Blog)

Alibaba vs. Tencent. “There is currently a war raging in China between two of the country’s biggest e-commerce juggernauts. This war is characterised by tactical manoeuvres and counter offensives from both sides. The two companies involved are e-commerce giant Alibaba and Internet behemoth Tencent and the prize is domination of China’s mobile payment market. // This war isn’t new. It’s been raging for years. But the latest flashpoint has been over control of taxi-booking apps.” (East-West Connection)

If this leads to more honest cabbies, they should just fake the arrest. Everyone wins, no one loses. “Cab driver, Wong Wah-wai, has been sentenced to three-months in jail and banned from driving for eight-months, for overcharging an undercover police officer.” (Coconuts Hong Kong)

The Rolling Stones in Shanghai interlude:

“Flower Town: The rise and fall of a Sichuan village.” (Sascha Matuszak, the Anthill)

“Less people in China believe that faith in God is necessary to be a moral person than any other country.” (The Diplomat)

Ready for St. Patrick’s Day? Here’s what you can do in Beijing. (the Beijinger)