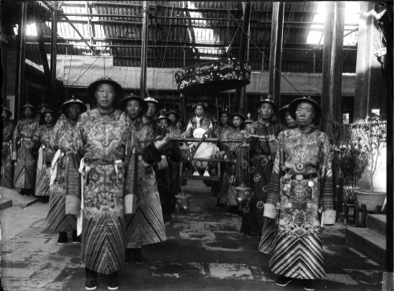 There’s little chance Max Baucus, the incoming US ambassador to China, will make an entrance quite like Gary Locke’s in 2011. Locke, the departing US ambassador, nearly broke Weibo when he journeyed from Seattle to Beijing in coach, carried his own luggage, then bought his own coffee. Writing in China Daily, Chen Weihua contrasted Locke’s trip with the travel styles of Chinese government officials: “In China, even a township chief, which is not really that high up in the hierarchy, will have a chauffeur and a secretary to carry his bag.” Chen and others acknowledged and admired a perceived “American way” of official travel: humble, frugal, and simple.

Political travel, the movement of leaders and bureaucrats from one place to another, can be a strategy for managing an empire, a weapon to draw out enemies, a ploy for pushing a reform agenda, or merely a way of presenting a politician as a man (or woman) of the people. In the American context, it is easy to think of political travel in this way – vacation destinations of presidents are subject to scrutiny and polling – but in China the political nature of travel does not nearly as much attention. In part, that may tie to the legacies of the tributary system that governed much of imperial China’s international relations. Other countries sent representatives to China, not the other way around.

Moving beyond this easy-to-arrive-at conclusion, the symbolism and meaning behind the travel of Chinese officials ties to matters of philosophy and practical politics.

With the consolidation of the civil service bureaucracy in the Northern Song Dynasty, the transfer of officials became a highly regulated and symbolic process. How an official traveled had philosophical and moral connotations. Riding a horse was a big deal. Historians have hypothesized it was a type of coping mechanism to supplement Chinese masculinity, a way to display machismo when Chinese men spent most of their time reading, writing poetry, and on generally less vigorous pursuits than their Tang predecessors. Riding a donkey, too, was deeply symbolic. Historian Cong Ellen Zhang thinks that bureaucrats on top of asses were hoping to express a “calculated eccentricity and nonchalance and a sign of conspicuous humility” because donkeys were not “conventional mounts for the powerful.”1

During the Northern and Southern Song the most magnificent and most controversial means of transportation was the sedan chair. Some Song officials saw riding in a sedan chair as unsavory, unnecessary, and unethical. Chen Yi and Wang Anshi — often on different sides of philosophical, political, and economic debates of the period — both objected to riding in them because this means of transport so “obviously substituted humans for animals.”2 Despite these objections on moral grounds, sedan chair became so increasingly common for officials and merchants that the Song had to pass a sumptuary law limiting the size of commoner retinues so as to not impinge upon official dignity.

The question of if and how an emperor should travel was a bit trickier. Though precedents existed for the Emperor to take periodic inspection tours (xunshou 巡守), by the Northern Song dynasty some thinkers associated a court on the move with the chaos of the latter part of the Tang Dynasty. The Jurchen conquests of the Northern Song and the repeated flights of the Song Emperor strengthened the link between an emperor on the move and regime instability. In the ideal and orderly polity, officials thought, the Emperor stayed in the palace. Only then was all right under heaven.

But this was just one line of thinking. The Jurchens, Mongols, and other northern steppe regimes were polities on the move. Leaders traveled to maintain and strengthen personal connections among various vassals and allies. Politics was personal. These two conflicting strains of thought on imperial travel and touring — a sign of chaos and decay or simply another way to conduct business — became more acute during the Ming Dynasty. A resurgent bureaucracy remonstrated a number of emperors seemingly under the influence of Mongol habits of governance. The Yongle Emperor was a “ruler on horseback,” despite the fact that elements of the Ming bureaucracy opposed his sojourns and campaigns. In fact, in the early 1400s, two leading bureaucratic officials compiled Memorials of Famous Officials Throughout History, many of which dealt with the evils of imperial travel and touring.3

In the Manchu-led Qing Dynasty, the travels of the emperor first served as a way to consolidate power and co-opt southern Han literati, but by the end of the dynasty the movement of court reflected the increasing instability of regime. The Kangxi Emperor took six inspection tours to the south of China, particularly in the jiangnan region, around present-day Jiangsu and Zhejiang provinces. The Manchu court also undertook annual hunting trips to Chengde, their retreat in Manchuria. It was important, Qing emperors thought, for Manchus to maintain their martial vigor. The Qianlong Emperor, mimicking, but not outdoing, the trips of his grandfather, also took six tours to the south, where he held special examinations for the bureaucracy, inspected water works, and continued to co-opt Han literati support for the conquest regime. Travel was a strategy for regime consolidation. By the end of the dynasty travel was again a strategy for regime survival. The Qing Court fled from Beijing to Xi’an during the Boxer Rebellion.

Of course, the 20th century offers numerous examples of Chinese officials on the move. Sun Yat-sen crisscrossed the country giving speeches. A tried and true stratagem of Mao Zedong was to leave Beijing for long stretches of time to draw out his enemies. Deng Xiapoing embarked on his Southern Tour in 1992 to help push through his agenda of economic reform. Looking back on Xi Jinping’s first trip domestically and abroad, first to Guangzhou (echoing Deng’s Sothern Tour) and then to Russia (following Mao’s first trip as the head of the PRC), perhaps reveals some hint of Xi’s dual goals: economic reform and political retrenchment.

Political travel, in China and elsewhere, is a strange combination of style and substance. It can be planned, with pomp and pageantry. It can be serendipitous, with the refusal of Starbucks to honor the coupon of the departing US ambassador to China. In either case, politics takes place on the road as much as in the corridors of power.