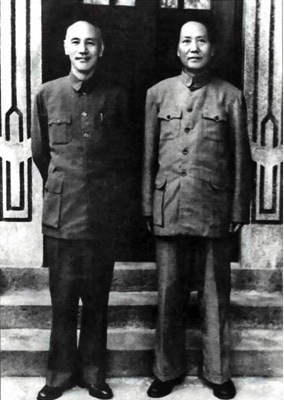 In Taiwan, it is hard to get away from the image of Sun Yat-sen, the leader of the Xinhai Revolution and one of the key figures in the history of the Guomindang (KMT): his portrait is on the money, in schools, museums, and a host of other public places. He is also the only KMT figure to be officially honored in the Chinese Communist Party’s narrative of 20th century Chinese history, and even has his own memorial in Nanjing.

The narrative of the CCP’s triumph over the KMT needs Sun’s legacy to fit events in Chinese history into a Marxist framework. At the same time, CCP narratives of 20th century Chinese history have to show the decrepitude and inefficiency of the KMT to establish the PRC’s political legitimacy. Sun is an important and useful figure in these tasks. His political legacy on the mainland benefits, in part, from his early death. Passing away in 1925, he was not alive for many of the later conflicts between the CCP and KMT.

First, the theory: before there can be a Marxist revolution, there needs to be a bourgeois-capitalist revolution. The Xinhai Revolution and Sun Yat-sen’s legacy within it play an important role by filling this plank in the Marxist models of historical change. Sun’ s actions helped set the scene for the eventual triumph of communism by ending dynastic rule in China.

But as much as Marxist doctrine needs something like the Xinhai Revolution to satisfy its analytical framework, the Chinese Communist Party also needed to explain why its own political organization was better than the KMT. Go into nearly any museum around the country and this narrative isn’t too hard to tease out. The CCP, a disciplined and dedicated band of revolutionaries, fought to correct centuries of injustices; the KMT, a corrupt political organization, preyed on the people, taxed them unfairly, conscripted men into the army, concerned itself more with self-preservation than protecting the nation; because they were so different — in ends, means, and organization — it was natural and necessary that one triumphed over the other.

But what if they weren’t? What if there was a high degree of continuity between the organizations and goals of the KMT and CCP?

For a long time this question was not really on the table. In the immediate aftermath of 1949, the establishment of the People’s Republic of China appeared like an important and decisive break. The question was simple but important: Why did the CCP win and the KMT lose? No one really investigated how the two parties were similar, as well as how some of the building blocks of the PRC originated in the KMT.

But for the past 25 years, this is what many political historians of 20th century China have been asking.

During the 1920s and 1930s, historians point out, both the KMT and CCP were Leninist-style political organizations. William Kirby, a historian at Harvard University, uses the concept of “the developmental-state” to find continuities.1 Both parties took top-down approaches to organizing resources — natural and human — to develop China’s economy.

Morris Bian of Auburn University outlines how the danwei – or work unit, which provided jobs, housing, medical, and other services to workers — originated in the 1930s and 1940s and was not solely the creation of the PRC. Bian sees evolution, rather than revolution, of institutions after 1949.2

Joseph Esherick, a recently retired doyen of Chinese studies, gives this line of thinking its best summary when he writes, “The CCP did not only rise to power as the dialectical opposite of the Guomindang. There were important points of unity in the dialectic-areas where the Guomindang paved the way for the Communists, where the latter built on the foundations laid by the former.”3

That is not a line you’re likely to find in the exhibits in the National Museum in Beijing. For that matter, you are equally unlikely to find it in the National Palace Museum in Taibei. The CCP would prefer not to admit the possible origins of its institutions in the KMT, and likewise, the KMT doesn’t want to show that it was somehow an antecedent to the PRC. Both stress discontinuity.

Of course, this is academic theorizing, but it is theorizing about stuff that really matters: official historical narratives and the building blocks of political legitimacy. The CCP can’t be similar to the because then all the stuff the CCP says is undermined. The historical narrative permeates life in China: you can see it on the evening news, Xinwen Lianbo, in the papers, Renmin Ribao, and museums across the country. Protecting and preserving it is a vital task; questioning and doubting it a dangerous offense. Just another reminder that history matters.