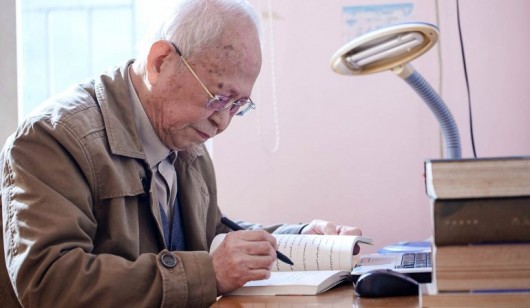 A receptionist at the Wangfujing Branch of China’s Commercial Publishing House got the surprise of her life when an old man walked in with a several-thousand-page handwritten manuscript.

At 76-years-old, Che Hongcai had only one thing to say: “I’m finished.”

In his hands was the first ever Pashto-Chinese dictionary, a project commissioned, re-commissioned and eventually lost by the State Council.

It all began in 1975. Although Mao Zedong was still alive, Deng Xiaoping had effectively gained control of the government, the Party and the military.

In a moment foreshadowing Deng’s famous reforms of the 1980s, the State Council called a national meeting in Guangzhou to discuss the creation of 160 foreign-language dictionaries that would serve the nation during its coming decades of expansion.

At the time, dictionaries between Chinese and the world’s languages were very few, and many languages had no competent speakers in China.

After polling several schools, Che Hongcai was found to be the only professor especially skilled at the Pashto language of Afghanistan.

Ultimately, only 70 percent of the dictionaries ordered ever saw publication during the 1980s. Most simply fell through the cracks and were forgotten as roles changed and professors passed away.

That Che persevered – unsupervised – for 34 years stunned Zhang Wenying, editor-in-chief of the Commercial Publishing House. It took Zhang two years of research to unearth the forgotten dictionary program and arrange for the publication of Che’s work.

“I enrolled at the Beijing Institute of Foreign Languages, now the Beijing University of Foreign Culture and Studies, in 1957 to study English,” Che said

During his third year at the school, Che and his classmates were reassigned to study less spoken languages that would enrich the cultural capacity of the school’s language department.

Che was sent to Kabul, Afghanistan for a four-year exchange program at the Cultural Institute of Kabul University.

His task, the Pashto language, was exceptionally complicated.

Its speakers, the Pashtun people, trace their origin to the ancient region of Bactria, a land influenced by diverse faiths such as Zoroastrianism, Buddhism and modern-day Islam. Furthermore, the language was a frequent target of radical reform under the country’s unstable political leadership.

“When I returned, I was assigned to teach Pashto at the newly founded Beijing Broadcasting Institute. Today it’s known as Communication University of China,” Che said. Like many of his classmates, he was called to attend the 1975 meeting in Guangzhou.

Che returned to the school with instructions to work on a Pashto dictionary. Although he worked seriously on the task for the next two years, he eventually left the school to begin a career at China Radio International after Mao Zedong’s death.

Seeing the Pashto-Chinese dictionary project unattended and the school without any Pashto speakers, the Commercial Publishing House asked CRI’s Pashto “division” for help – a move that put them back in contact with Che, the division’s only member.

After some urging, Che accepted the project a second time and was assigned back to the school. The institute provided him two assistants: Zhang Min, his roommate from Kabul, and Song Qiangmin, a former student.

Che, Zhang and Song worked hard to create more than 100,000 index cards containing Chinese and Pashto terms sorted by topic. However, their work was repeatedly interrupted by other reassignments.

In 1980, Che was moved to the Ministry of Foreign Affairs as an analyst of Middle East policy. Four years later, he was pulled back to the university to compile textbooks for the school’s new Department of International Media.

Song ultimately moved abroad to the US, leaving Che and Zhang to work on the dictionary through the 1990s.

Che retired in the mid-1990s and spent much of the last decade revising drafts of his dictionary with the aid of modern Pashto translation software.

Reflecting on a life of service

“In my generation, we were never free to choose our own profession. Our tasks were assigned entirely at the whim of the government,” Che said.

After the arrival of the 1990s, most of the old government-assigned tasks were abandoned.

“Everyone was busy with their own work, and our assignments were forgotten by all,” Zhang said.

Cui Yan, chief of the Commercial Publish House’s Foreign Language Section, blames the neglect on the size of the team.

“With only several professors assigned to the task, it was easy to forget about the group,” Cui said. “The story of this dictionary is really the story of China’s political changes and its shift toward self-determination.”

For their work, Cui and Zhang will be paid 80 yuan per 1,000 words. Their 2-million-word Pashto dictionary is due out during the second half of 2014.

One Response to “34 Years Later, A Finished Pashto-Chinese Dictionary”