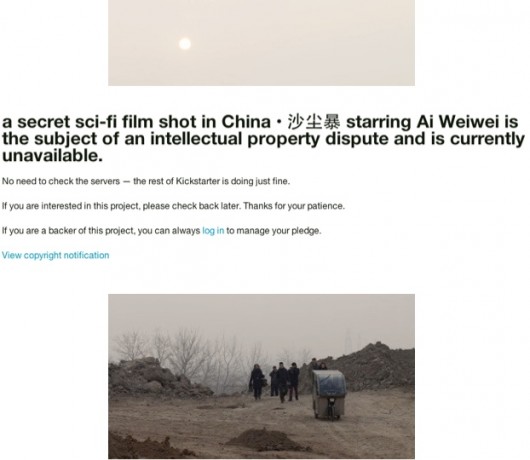 We publicized a Kickstarter on April 1 of a 10-minute dystopian sci-fi film set in Beijing by TED Talks director Jason Wishnow that was advertised as “starring” Ai Weiwei. It blew past its $33,000 goal in no time, probably thanks to the attention that Ai Weiwei — China’s most visible artist — garners around the world. But now the Kickstarter has been removed and the preview for the movie, The Sandstorm, is only available on YouTube. What gives?

But rather than spark a debate about resources and government authority, the project has blown up into a dispute over copyright and crowdfunding, as Ai downplayed his role in the film Monday. Through his representatives, Ai claimed he’d agreed only to a small part in the movie.

The Kickstarter campaign promoting “The Sandstorm” goes much further, portraying Ai as the star. The crowdfunding page — which has been taken down, but a cached version is available here — explains how the filmmaker, Jason Wishnow, secretly recruited Ai to a two-week production session during which the crew “used code names and ever-shifting modes of communication, tapping cloak-and-dagger pulp-fiction playbooks” to avoid alerting Chinese authorities to their work.

“When the air is toxic and your lead actor is under surveillance, you make a SHORT film and you shoot it FAST,” the project page reads.

Despite now being blocked from public view, the Kickstarter has already exceeded its $33,000 goal by more than $60,000. That’s little comfort to Ai, though, who accuses Wishnow of stealing his name and image — as well as photos Ai posted to Instagram — to promote the movie.

Ai Weiwei’s studio sent a letter to Wishnow — via Twitter, of course — that asks, among other things, for a public apology “acknowledging that you have engaged in the activities discussed above without Ai Weiwei’s consent and therefore misled potential providers of funds to your project.” You can read the full letter here.

We’re not sure why it took 30 days for Ai’s studio to protest so harshly against Wishnow and company. But now we also wonder about the director’s motives, specifically why he bothered to make a dystopian sci-fi flick in Beijing. Was it just for some viral attention? Wishnow appears to have the cache to produce something bigger, on the right side of legitimate — heck, The Sandstorm employed Wong Kar-wai cinematographer Christopher Doyle – so why risk blowing future opportunities to do work in China by producing a drive-by short about pollution?

Timely enough, The L Magazine recently published an article called, “The Problem of Using Ai Weiwei to Sell Crap.” The Sandstorm may actually be an entertaining film, possibly even an important one. But if the people involved really believed that, they should have marketed it as thus instead of using Ai Weiwei for cheap heat.