Say what you want about his art and activism, but Ai Weiwei isn’t boring, and certainly not afraid of trying new things. In his latest venture, he makes his acting debut as the star of a sci-fi short film called The Sand Storm, shot this past winter in Beijing during particularly smoggy days. Yes, the story is dystopic.

The 10-minute film is currently seeking support on Kickstarter. As the writer and director, New York-based Jason Wishnow (filmmaker behind TED Talks), describes it, The Sand Storm is a “dystopian science fiction film set in the not-too-distant future.” Ai Weiwei plays a smuggler in a waterless world. Notably, the movie was shot by Christopher Doyle, famous for his cinematography in the Wang Kar-wai classics In the Mood for Love and Chungking Express (and Zhang Yimou’s Hero). The short film apparently also features an original score by a 28-piece orchestra recorded in a studio at Abbey Road.

All the filming is complete, but the team needs $33,000 for postproduction work. (Wishnow: “We needed to keep the film a secret and didn’t want anything sabotaged.”) The Kickstarter was just launched, but it’s already 23 percent to its goal (32 days remaining). Something tells us a few @aiww tweets are all that’s needed to push it past $33,000, but go make a donation if you’re the kind for perks (screening invites and such).

Or, you know, cynically wait for our review. We hope it’s better than The Divine Comedy. 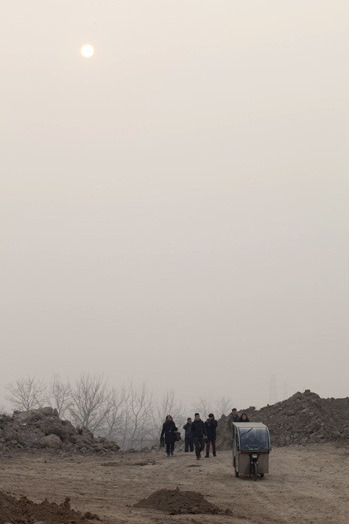 UPDATE, 4/30, 12:43 pm: The Kickstarter has been pulled due to objections from Ai Weiwei. The trailer can only now be found on YouTube: