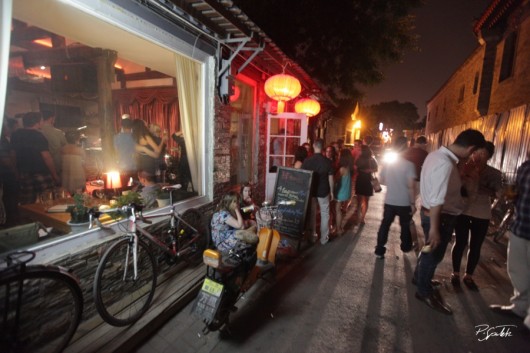 You’ve probably heard the rumors of 4corners’s demise, but are they premature? “Forced renovations” is how owners Tavey Lin and Jun Trinh describe their popular bar/restaurant/livehouse’s impending (temporary?) closure.* What this means for the rest of us is two huge parties, today and tomorrow. To get a preview, I sat down with Tavey and Jun on Wednesday. In addition to looking ahead, they couldn’t help reminiscing a bit about everything, from parties to concerts to bathroom sex.

4corners opened in December 2011, and its first party, that very month, was called Bar Breaking Party, which coincided with the first of what would eventually be three renovations. (Fourth forthcoming.)

Jun: “We were supposed to be more of a restaurant space rather than a bar space in the beginning. So the idea was that the bar would be here [in the center] and accessible from all the different rooms.”

Tavey: “We invited all of our friends to come here and take sledgehammers and smash the whole bar because we were gonna do renovations.”

The new path that was carved out, from the front area to the back bathroom, Jun called “hookup lane.”

Jun: “If you can’t hook up with somebody by the time you get to the bathroom, we can’t help you.”

THE FIRST (and only?) FIGHT

Jun: “There have been a shit ton of parties here. At one point they all merge and become one giant party and we can’t really discern the differences between them anymore. Well, there was one time I had to knock out a drunk customer because he was trying to fight me after walking through the courtyard door. He bumped into it and he got angry, so he started to beat the courtyard door up. In the process he cut up his hands pretty badly and we tried to help him, but when I got to him he thought I wanted to fight him.”

BJC: “You were the door fighting back.”

Jun: “Yeah, exactly. So in the midst of it all at one point I couldn’t really control him anymore, so I had to head-butt him in the face. Then we were able to apply bandages to him before his friend showed up. His friend asked ‘Did you do this?’ and I say, ‘No, man, he punched that door!’”

BJC: “How often does that happen? And what do you do?”

Jun: “From the tapes, uhhhh, probably six or seven times.”

Tavey: “It’s the real way we make our money. We put these tapes online.”

Jun: “We help couples have affairs, too.”

Tavey: “Oh yeah, well there was that guy who proposed to his girlfriend here. We had a goddamn wedding here!”

The bar’s capacity was put to the test at a Chunjie party in 2012.

Jun: “This one showed us how many people we could get in — it was massive. We had a huge dinner that night.”

Tavey: “Nah, 80 people. I was there, I was selling tickets: 80 people for the buffet. Then just a shitload more people showed up later and just partied. People later went out to the back and on to the roof and watched the fireworks over Gulou.”

Jun: “And nobody hurt themselves, which was a miracle.”

Tavey: “It was our friend, or maybe his twin brother, that fell while climbing the wall up to the roof. He landed perfectly on his ass and he was just sitting there looking up at me, ‘Wow, I can’t believe I’m not dead!’ He got back up and climbed back on to the roof again.”

Tavey: “It was our first huge party.”

Jun: “Did the cops come that night?”

Jun: “The cops haven’t come here in a while actually. Months actually. Its been months and months. I wonder who I should be giving money to.”

Tavey: “Apparently you’ve already given them the money. Or done something.”

Party-hosting can take its toll. At times it can take 300 neuroscientists and a bucket of water to mix things up — which, of course, actually happened.

Tavey: “On a Monday night? Yeah! And then all of these buses of neuroscientists just come in and it turns out that scientists can drink. They partied really, really hard. So the place was just crowded and packed with drunk scientists. The neighbors start complaining because the courtyard is chock-full of people, and then that’s when the guy gets up on the roof. The next door guy. There’s a neighbor, his parents live there, and he’s very protective of them, so if it gets noisy… He climbed up on to the roof with a bucket of water and then poured it all over everybody in the courtyard and they came rushing out.”

Jun: “Before that, we were about to get everyone out of the courtyard. We were in the midst of doing that, and that’s when he started throwing the water. That’s when I lost it.”

Tavey: “Jun gets up on the roof and tries to start fighting him Jackie Chan style.”

Jun: “But no, instead of actually fighting him it breaks down into a childish shouting match. Where I say, ‘Get the fuck off my roof!’ and then, ‘This isn’t your roof, this is my roof!’ ‘NO! This is obviously my roof! You are on my fucking area right now — this is my roof!’ and he says, ‘Oh yeah? Oh yeah?’ then he jumps back and says, ‘Well, this is my roof!’ Ugh. This went on for quite a while. He goes and starts pouring more water, then my guys come along and are pouring water…”

4corners and live performances go hand-in-hand. Shows happen basically every weekend, and the stage is used for karaoke and open mic nights throughout the week. Countless DJs and bands have taken the 4corners stage, so picking the most memorable proved challenging for Tavey and Jun. They eventually decided it was either Fête de la Musique (Beijing Music Day, June 2013) or Marcopalooza (June 2013).

Tavey: “Marcopalooza was our friend Marco’s birthday. Basically he drums in half the bands in Beijing. So we got three bands that he’s in to play and another band that some of his other band members are in. Four bands and he played drums for them (Beijing Dead, The Groove Collective, Not There (RIP), Tavey Lean and the Solid Gold Dream Machine).

“At one point the police came and I think they stopped outside so I walked out there, and they said, ‘Hey, where’s number 11?’ And I just pointed down the hutong and they just kept on going.

“Someone filed a noise complaint. It turns out the noise complaint was for a place that was further down the hutong. Some of the members of Not There got in a fight. So it actually wasn’t for us, somehow. That was the biggest concert that we’ve had.”

THE MOST DESTRUCTIVE EVENT

Surprisingly, 4corners has held up and remains basically unscathed after all the concerts, drunken debauchery, and water fights. Also, it survived a fire this spring festival.

Jun: “Yeah, my jacket’s burned. One of my Chinese jackets.”

Tavey: “I got hit in the mouth by a piece of flaming something.”

Beijing Cream published a video of this fire (which I took — sorry about the crap quality, we’ll crowdsource next time!), which began when someone shot a firework at a large tent. Luckily, no one was inside the tent at the time.

Jun: “Every year they’re supposed to take [the tents] down, but this year they just didn’t. So the property company that may be interested in buying this area might be the same guys who left the tent there.

“That was the first fire. The second fire was a few days afterwards in the kitchen.”

BJC: “Are those the only fires you two have seen here?”

Tavey: “Besides in the fireplace.”

Jun: “Yeah, besides in the fireplace. We’re usually pretty good with fires that we make. Those ones are great.”

* 4corners is split into two sections, a front and back, which are owned by different landlords. Tentative plans for the future include a remodeling that will return the front of the house to the original tenants. A slice of the stage area, all of the courtyard, and the backroom will make up the new bar. It’s a big cut, so be sure to hit up these two parties that put the full floor plan to use.

Shannon traverses Beijing by bike and with a camera. She is saving money for that fancy DSLR, but until then, follow her on Instagram at Earth is Boring.

From the 4corners newsletter:

SONGS OF ICE AND FIRE
Game of Thrones fantasy cosplay party with kickass live music to boot! Don’t worry we’re not going to Red Wedding you. Headliner The Groove Collective rips it at midnight after a fun jam session with the Avengers of Music and other 4c stage regulars! Fun starts at 10:00. Yes, Jun and Kristin are dressing up as Kal Drogo and Khaleesi.

SATURDAY TEAR THE ROOF OFF
The Beijing Dead at 10:00pm followed by Tavey Lean & The Solid Gold Dream Machine at 12:00am. Four Hours of quality music by the bands that have brought you the best moments on the 4corners stage. One for the history books, no doubt.

One Response to “Concerts, Fires, Bathroom Sex: An Oral History Of 4Corners”