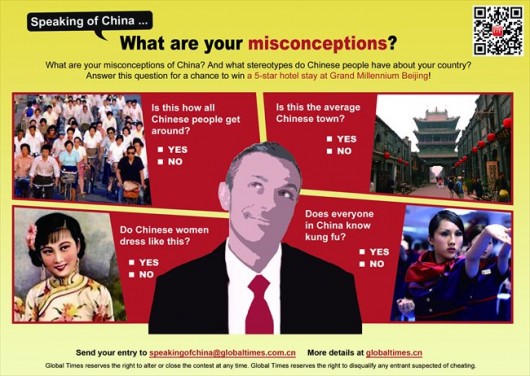 Global Times is back with another reader contest, “What are your misconceptions?” Those who answer that question as it relates to China – with either short essay (150-250 words), photo, video, etc. (“the possibilities are endless!” Endless?) — can win a stay at the Grand Millennium Beijing. So, Global Times, mind if we get an example?

“I’m surprised no one has touched upon the most pernicious lies spread by American propaganda (China committing “genocide” in Tibet or Xinjiang, China doing nothing but stealing/hacking the US’s tech, China’s government being super corrupt, and some other awful racist stereotypes) “

That’s via GT’s Facebook, which is (naturally) promoting the contest (hat tip to Eric Fish). And that’s glorious.

However… maybe not glorious enough. The winners will apparently be chosen by public vote. Is this amazing competition actually a popularity contest in which someone could write something akin to the opposite of Andy Li’s answer (maybe: “Pandas, contrary to popular misconception, taste more like beef than chicken”) and still win?

We’re not sure we want to find out. But if you do, here’s how to enter: