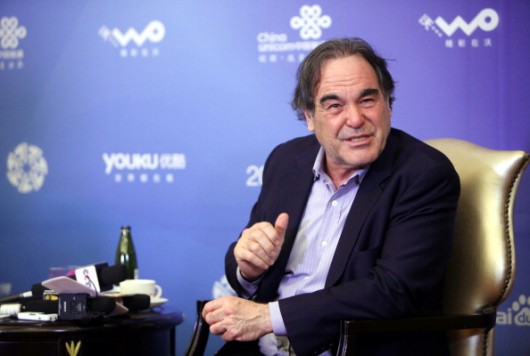 The fourth Beijing International Film Festival opened on Wednesday, and it looks like it’s already less boring than last year’s. For that we have the Oscar-winning director Oliver Stone to thank, who on Thursday in a panel discussion spoke provocatively on Mao Zedong and urged the Chinese to confront their history. As The Hollywood Reporter reports:

“Mao Zedong has been lionized in dozens and dozens of Chinese films, but never criticized. It’s about time. You got to make a movie about Mao, about the Cultural Revolution. You do that, you open up, you stir the waters and you allow true creativity to emerge in this country. That would be the basis of real co-production,” said Stone, speaking at a panel on co-production which also included Gravity director Alfonso Cuaron and Paramount Pictures COO Frederick Huntsberry, and was moderated by Zhang Xun, president of China Film Co-production Corporation.

“Three times I’ve made efforts to co-produce in this country and I’ve come up short. We’ve been honest about our own past in America, we’ve shown the flaws.”

Clearly on a roll…

“It’s all platitudes. We are not talking about making tourist pictures, photo postcards about girls in villages, this is not interesting to us. We need to see the history, to talk about great figures like Mao and the Cultural Revolution. These things happened, they affect everybody in this room. You talk about protecting the people from their history. I can understand you are a new country since 1949. You have to protect the country against the separatist movements, against the Uighurs or the Tibetans, I can understand not doing that subject. But not your history for Christ’s sake,” said Stone.

“We’re talking about the essential essence of this nation of how it was built, this whole century, you’ve not dealt with it.”

The audience, “mostly film and media professionals, many Chinese,” Sinosphere notes, “clapped loudly” at his comments.

Perhaps we could pause here to point out that Hollywood is mostly platitudes these days, too: “tourist pictures” — i.e. summer blockbusters — that are heavy on entertainment but superficial in almost every other way. But American cinema is self-regulating, so for all those movies that appeal to mass audiences, seeking to please the common denominator, there are plenty that dare to be artistic and brutally honest. One of those films won an Oscar for Best Picture very recently, I believe. Twelve Years a Slave is the sort of film that will never be made in China, because those in charge of the film industry here must answer to people higher up, people who are much too immature to handle ponderous, critical, far-reaching subject matters that dare reflect any semblance of truth. In China, there are simply too many intellectual cowards. If Stone was too polite to say that out loud, we’ll do it for him: censors are destroying this country’s culture because they take orders from milksops and dummies.

We all know it, including the Chinese, if the audience response is any indication: censorship deadens art, waters it down. The only people who remain clueless — willfully, I think — are conservative hardliners within the Party who would rather wait out the world’s changes and die in their leathery skin rather than consider the possibility that censorship is unnecessary and oh yeah the earth is round. They maintain that cultural emasculation is a necessary price to pay for stability, purely unable to question whether the price we’re paying is too steep.

Guess who has the power to make things change? It’s not Stone, and it’s really not the people clapping at his comments. If Farewell My Concubine, possibly the most critically acclaimed mainland Chinese film of all time, can remain blocked in this country, then nothing else really has a chance. Quality is a secondary consideration when examining art in this country; adherence to CCP dogma is first.

POSTSCRIPT: I wrote about the closing ceremony of last year’s Beijing International Film Festival, which I attended. An excerpt:

The extravagance, unfortunately, served to prove yet again that glitz is often merely farce dressed up. What we witnessed was the red-carpet-film-awards equivalent of a Chinese factory owner hiring a white face to accompany him on an inspection tour. We were treated to a comedy of miscommunication that would have made residents of Babel grimace. Less a showcase of the cinema than a self-congratulatory trade show, the audience reacted accordingly, supplying often mistimed applause more tepid than you’d find from an American crowd at a cricket match.