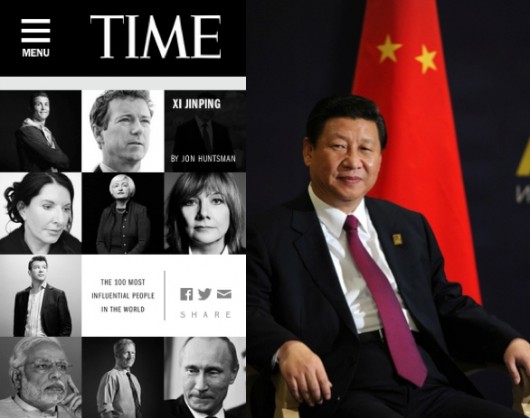 Time has released its most recent edition of the Time 100, its click-baity list of “the most influential people in the world in 2014.” Among those on the list is — no surprise — Xi Jinping, who got a three-paragraph writeup from former US ambassador to China Jon Huntsman. The opening sentence should raise some eyebrows:

Xi Jinping has emerged as the most transformational Chinese leader since Deng Xiaoping. His steady style exudes confidence while revealing little, capturing the attention of thought leaders worldwide.

That’s not exactly a compliment.

Xi is determined to break the sclerosis that threatens the ruling Communist Party’s grip on power, but he is relying on the politics of intimidation to do so.

The blurb ends with a requisite speculative non-speculation, since all pieces on the future of Chinese politics need to hedge:

While his preoccupation will be domestic harmony, the world will demand China’s participation at the table of decisionmakers. During his decade in office, Xi will become the first truly global leader to represent a country that for centuries has struggled with cohesion and unity. There is no middle path going forward — it will either be a failed effort, which would be catastrophic for the region, or a reformed Middle Kingdom that will become America’s greatest challenge and opportunity of the 21st century.

Xi wasn’t the only Chinese person to make Time’s list. Pony Ma, founder of Tencent, got a write-up from Arianna Huffington:

Soft-spoken, boyish, reclusive: the words come up repeatedly in descriptions of Pony Ma. But while the founder of Tencent — the Chinese online giant that combines gaming and e-commerce with the QQ and WeChat messaging services — may have a low-key manner, he’s also an undisputed rock star. At Internet conferences in China, young people mob him, trying to snap selfies. The company he co-founded in 1998 has grown to such heights that Ma’s name is routinely found on all the Chinese equivalents of the Time 100 list. But he hasn’t just built a successful business. In China’s unique cultural landscape — from its mobile-savvy population to its one-child families — he has tapped into something timeless and universal: a longing for connection.

And Jack Ma (no relation to Pony) was called the “king of Chinese e-commerce.” Writes Michael Schuman:

Now Ma, Alibaba’s executive chairman, is seeking to change China in a different way. Last year he devoted himself to cleaning up the nation’s infamous pollution as chairman of the Nature Conservancy’s China program. “The environmental situation is not something that can wait,” he has said. Hopefully he’ll tackle it as quickly as he has won customers.

Actress Yao Chen was profiled by Time’s very own Hannah Beech (though remind me when speaking out against pollution was considered bold?):

She has opined on everything from the effect on her young child of China’s poisoned environment — choking smog, foul water and a toxic food chain — to the brave stand of a Chinese newspaper battling state censors. Last year she even quoted Aleksandr Solzhenitsyn: “One word of truth shall outweigh the whole world.” Or perhaps one gulp of China’s polluted air.

Benedict Cumberbatch, star of Sherlock, though not Chinese, deserves a shout-out, because, you know, close enough. (He’s really popular here.)