Nice catch of a falling baby in Zhongshan, Guangdong province, via The Nanfang

Have a nice weekend links. Speaking of weekend… on Sunday, in an event that will probably be cancelled (shh, don’t tell anyone), professors Yan Hongbiao and Ding Dong will talk about “ordinary Chinese people’s views of the Cultural Revolution” from 3 to 5 pm at the Crossroads Centre (18 Da Shiqiao Hutong, Jiu Gulou Dajie; directions and contact info here). 40 rmb (30 rmb for students). The talk will be in Chinese, if it happens.

Will authorities let him? “I am going to turn myself in. // For me, the Tiananmen crackdown was the beginning of a gradual awakening. I was only 15 in 1989, a middle school student in a remote mountain hamlet in China’s far northeastern province of Jilin. Everything I knew about the events of that year came entirely from China’s state-run television station, CCTV: The demonstrators were counter-revolutionary rioters. The People’s Liberation Army exercised great restraint and did not open fire, whereas some rioters burned soldiers alive. I believed it all. I was even grateful to the government and the army for rescuing the nation.” (Murong Xuecun, NY Times)

One day after the Urumqi bombing. “It’s becoming clear that China is a country with a serious terrorism problem. Earlier this month a report issued by Beijing University’s Centre for International Strategy and Security Studies highlighted the issue, warning that ‘Terror attacks in China have become more active than in previous years in both the number and seriousness of the attacks. The anti-terrorism condition facing China is grave.’” (Slate)

“Danmei,” i.e. “indulge in beauty.” “Danmei is part of an ‘ongoing sexual revolution’ with feminist characteristics in China, perhaps the country’s first, said a Chinese academic who requested anonymity. China is currently undergoing a crackdown on pornography that has netted danmei writers and website managers, and closed some sites, sexual rights advocates said. ‘The campaign is really having an impact,’ the researcher said. // …So those fantasies, safely projected onto ‘other,’ gay, male bodies, represent a revolt against a deeply conservative culture, which expects passivity and childlikeness from women, Ms. Jacobs and the Chinese researcher said.” (Sinosphere)

Success. “China and Russia signed off on a huge gas deal worth as much as $400 billion Wednesday that heralds a pivot east for Russian business amid ongoing tensions with the West over Ukraine, though few details of the deal were made public. // The 30-year gas-export contract, seen as a move by Russian President Vladimir Putin to aggressively shift the country’s commercial interests east amid mounting sanctions from the United States and Europe, was signed as the Russian leader has enjoyed a warm welcome in China, where the two countries have inked a raft of agreements during his ongoing, two-day visit.” (USA Today)

Cyber espionage: “Prosecutors building a case against Wang Dong, one of five Chinese military hackers indicted this week for economic espionage, were helped by Wang’s apparent willingness to break a cardinal rule of spying: Leave no tracks. // Known as UglyGorilla, Wang is a pun-making hacker who left a trail of clues dating back years, according to several security professionals who have pursued him.” (Bloomberg)`

100-meter-long kite in Shenyang, and it’s of an octopus, via CRI English (yes, it’s a new Guinness record of some sort): 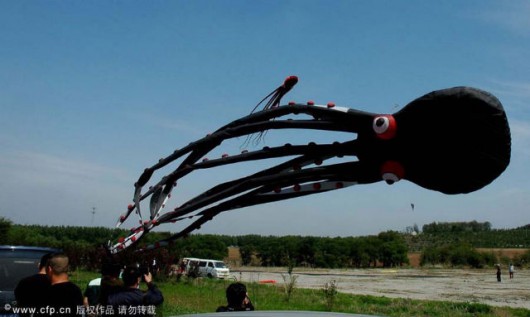