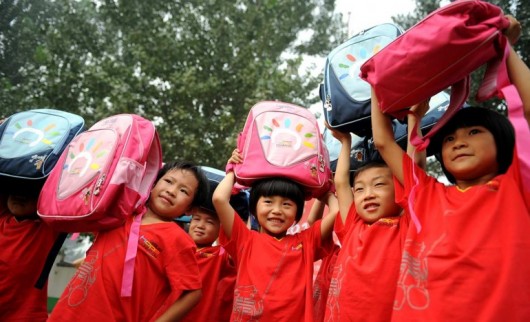 The nature of charity in China is changing. In the last decade, both international organizations and domestic groups have shifted from relying on donation drives to providing more complex cultural services to meet the specific needs of disadvantaged groups.

But finding the right way to go about charitable projects remains a tough question for many.

At a recent performance by Musethica, the group’s founder, Avri Levitan, spoke to the children of migrant workers at Chaoyang Banbidian Elementary about how theory and technique are not the way to go about mastering music. The education project encourages music learners to participate in charitable performances to give music to people who have few chances to experience it.

Musethica has been providing free concerts to orphanages, children’s education centers and nursing houses around the world. Its Beijing trip was supported by the China National Children’s Center, Youth League Committee of Chaoyang, the Isreali embassy and other organizations.

Most of the students were curious about the instruments and the performers. After performing five pieces, Levitan invited the children to play his violin. Yang Dongming, a 9-year-old student, said the performance was very different from most of the school’s events. Having studied keyboard, Yang said Levitan’s ideas were very different from his teachers’. “I always focused on theory and did whatever the teachers told me to do. I should have spent more time thinking about the meaning of what I was playing,” he said.

Charitable projects are increasingly common in China, although most focus on donating material goods to impoverished communities. Last month, students from Beijing’s Shijia Elementary saved money to send paper and notebooks to students at the city’s Xiao Tian’e Elementary School.

But art and culture performances are becoming a popular alternative as a way to open the minds of disadvantaged children and inspire them to strive for their own success. Most are organized or supported by the local government or educators.

Efficient and successful charity work depends on providing what the recipients need: not what the donor thinks or feels is necessary. Musethica provides art education to students too poor to afford tuition while the students at Shijia Elementary provided material goods their peers struggled to purchase. “Poor children or children with mental diseases need support, not pity,” said Professor Xu Guangxing, a child psychologist. “Seeing faces of pity at a charity event will only reinforce their powerlessness, whereas smiles and equal treatment can make them grow more confident.”

Whether the group behind a charity work is from home or abroad, charity organizers must be committed to helping solve real problems rather than flaunting their “kindness.”

Local lawyer Zhang Qihuai studied the early years of Chinese charity – specifically a case where charitable works became commercialized in Hangzhou, Zhejiang province. Zhang said charities that act in their own interests can easily find themselves in legal trouble.

Lack of legal knowledge and social responsibility is the main cause of charities going bad.

Xu Guangxing also said handing money to poor children only reinforces their powerlessness. Charity must come from respect, he said, and it must come regularly.