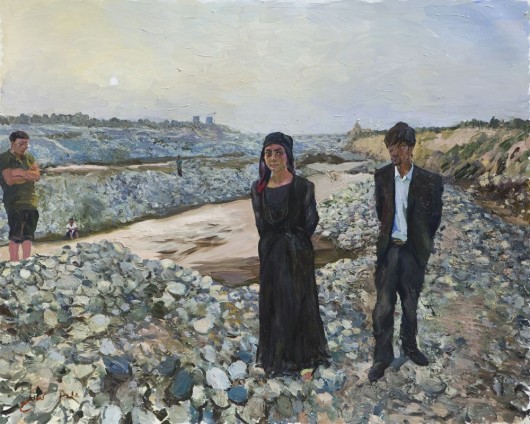 This is not the first difficult project Liu has carried out. Liu is famous for them. From the Three Gorges Dam, to the Wenchuan Earthquake site to the Tibetan plateau to inner-city youth in Boston, to his most recent project “between Palestinians and Israelis,” Liu seems fascinated by difference, trauma, and hardship.

Perhaps this is related to his position in the Chinese avant-garde art scene. If you look through Ai Weiwei’s images from his time in New York in the early 1990s, you’ll find images of Liu. But not only has he been a member of that scene for several decades, he was also one of the first contemporary artists to make it big. These days, he has plenty of support wherever he goes. Provocative contemporary Sinophone filmmakers such as Jia Zhangke and Hou Hsiao-hsien have joined him on previous projects, and his project in Xinjiang was no exception.

In Hotan, Liu’s collaborators included the world-class fiction writer Ah Cheng, the famous curator Hou  Hanru, and the highly-regarded social theorist, editor, and filmmaker Ou Ning. The four of them together produced exhibitions, a conference, documentary film, and research essays, and an award-winning book.

Liu’s subject was the Uyghur jade pickers of Hotan. They are a new population. It was only in the 1990s that the insatiable lust for jade among Chinese capitalists and conspicuous consumers trickled down to its raw producers and began to transform their economy. Jade pickers are farmers who supplement the earnings they can receive from their 2 mu (a third of an acre) plots on the margins of desert channels. The people Liu represented are just a fraction of the thousands of others who have taken their picks and shovels to the river bed. Rather than digging irrigation ditches, harvesting and peddling the fruits of their labor, they now scour the stones of the rapidly desiccating landscape for fist-size rocks that can buy their children a year in high school.

Liu, like most of his collaborators, is famous for a kind of realism that privileges the immediacy of “on the spot” observation. In an interview, he said working on the scene fills him with an awareness of the complexity of color and form in a way that other kinds of representation cannot. He said “painting is improvisation, I try to make it natural and in harmony with the locale.” 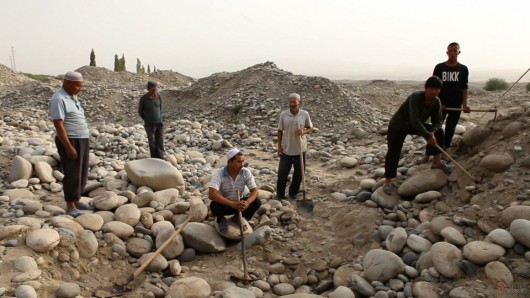 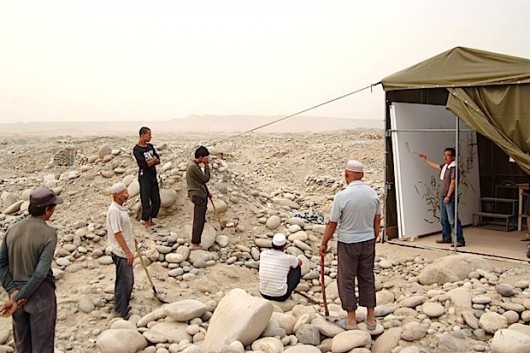 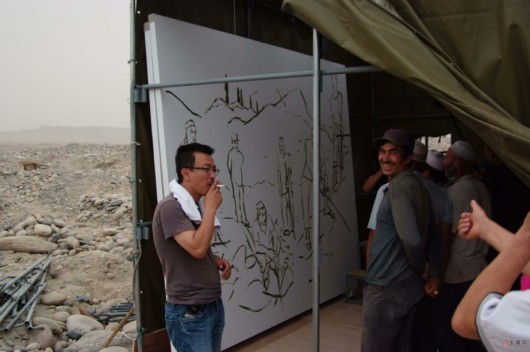 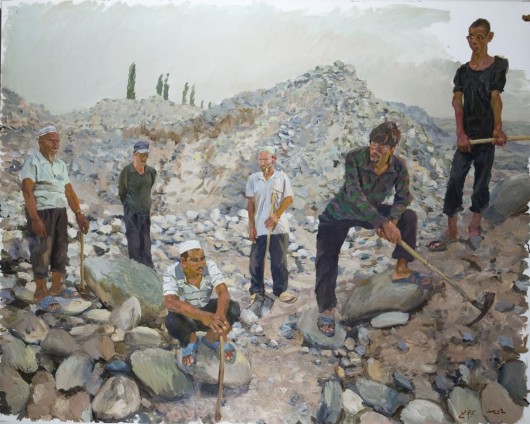 For Liu to see its color, life seems to often require a larger-than-life representation. But some of his images were smaller, darker, and more personal. They combined photos with painting in a way that produced a foreboding atmosphere. 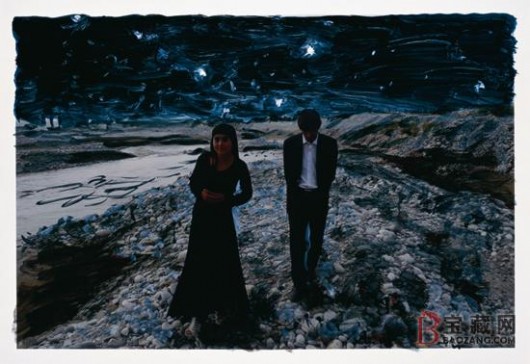 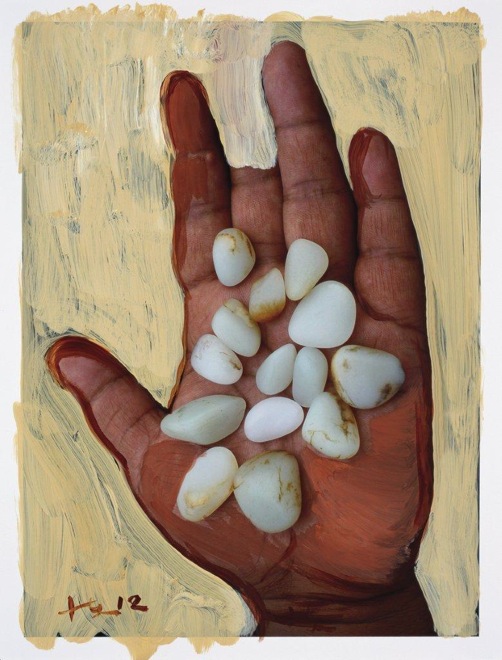 Hands missing middle fingers, skies unnaturally dark. These are subtle details that speak to larger truths that Liu and his colleagues sensed and experienced.

When I had the chance to ask Liu why he went to Hotan to pursue this project, he said with a smile, “I like to get myself into trouble.” But other than the harrowing experience of life and violence on the high desert, Liu really hasn’t experienced that much trouble.

Perhaps because he is a world-famous artist whose paintings command multi-million dollar prices, Liu’s project was featured as the centerpiece of the inaugural Xinjiang Biennale in 2012. The then-head of the Xinjiang Culture ministry, Han Ziyong, welcomed him and his images of poverty and survival to Ürümchi. The show then traveled on to Beijing’s Today Art Museum.

It is hard to say what impact Liu’s Hotan Project has had. Perhaps its main function was to render the poor of Hotan a safe and legible object to be viewed from a distance. Perhaps many of those who see these images fail to draw in the necessary linkages that implicate themselves in global and Chinese chains of commodification, consumption, and inequality. These images don’t show us how Hotan, China’s poorest prefecture, has received thousands of jade-seeking and subsidy-receiving settlers from other parts of China in the past few years.

But back in Ürümchi the critical edge of neo-realist representation has been taken up by some. The title of a recent exhibition at the brand new Xinjiang Contemporary Art museum of peri-urban street photography borrows both its title and shares a fascination with the acceleration of the two-hour gap between Beijing and Xinjiang, which you can see in Ou Ning’s special issue on Xinjiang in his literary journal, Chutzpah: Xinjiang Time.

And as the second Xinjiang Art Biennale opens tomorrow, more representation of development and those who survive it appears to be on view.