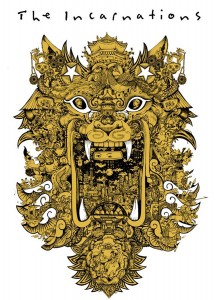 Growing up, Driver Wang’s father thought him a momma’s boy. “Send him to play outside more,” he complained. “The kid needs to get into some scrapes.” Little did Wang Hu know, his son had been through six lifetimes of scrapes. He’d been castrated by a sorceress, strangled by a lover, beaten by roving pirates, and tortured by Red Guards. Yet in his current life as a Beijing taxi driver, Driver Wang is unaware of any of this — until, one day, a mysterious letter falls from his taxi’s visor.

Past lives are the focus of Susan Barker’s latest novel, The Incarnations, based in both modern-day and ancient China. Like the striking mosaic of sketches on the cover, Barker combines the romantic, the metaphysical, the occult, and the Occidental to construct a house-of-mirrors novel that is hard to put down. While it takes a few chapters to get into, one’s patience with its initial lethargy is rewarded once the plot picks up.

On the eve of the 2008 Beijing Olympics, a taxi driver receives a series of letters, some of them describing long, elaborate stories, each one a supposed past life. Driver Wang’s current life, bland and fatiguing, is shaken by this periodic arrival of letters. Their mysterious author claims to be his eternal soulmate and determined incarnations biographer. “Who are you? you must be wondering. I am your soulmate,” reads the first letter. “I pity your poor wife, Driver Wang. What’s the bond of matrimony compared to the bond we have shared for over a thousand years?”

The letters begin to take on an anxious, almost threatening tone. They include long-winded, detailed accounts of two interwoven lives. The fourth letter tells of an imperial eunuch of the Tang Dynasty, castrated by his own sorceress mother for raping his sister, and of the eunuch’s bastard daughter who escapes a sacrificial ceremony and runs off to become an esteemed courtesan of a pleasure district. The letter after tells an equally involved story of two men whose town gets sieged by Mongol warriors, become slaves, and then lovers, while trudging through the Gobi Desert. In both tales, the letter-writer claims to be one of the two main characters; Driver Wang is meant to be the other.

These biographies are what kept me reading. Each is set during a perilous period in Chinese history: the Mongol invasions, the Opium Wars, the Cultural Revolution. In this sense, it is a historical novel, one grounded in past realities of the world. What is history though but a narrative interpreted by individual imaginations? Chinese history through Barker’s eyes, while remarkably gory and cruel, is, admittedly, thoroughly entertaining. The various colloquialisms and euphemisms used during the different time periods are particularly entertaining (such as “Riding the Unicorn Horn” in the concubine letter).

The biographies all follow the same layout: Wang’s incarnation and the letter-writer’s come together under remarkable circumstances; one sabotages the other in a fit of extraordinary passion. All of them end in a violent death.

They’re revealed in chronological order, from the Tang Dynasty, AD 632, all the way to the Cultural Revolution, 1966. Along the way Driver Wang possesses a variety of personalities: an esteemed eunuch, a facially scarred blacksmith turned Mongol slave, a duplicitous concubine, a waolai prisoner of Pearl Delta pirates, and a privileged student leader of the Cultural Revolution at the Anti-Capitalist School for Revolutionary Girls.

But the modern Wang’s story is also absorbing in its own right. He’s the emotionally neglected son of a powerful Ministry of Agriculture official and a socially deviant mother. In college he falls into a deep depression and is admitted to a psychiatric hospital for several months. There he meets a charismatic male prostitute and fellow patient named Zeng with whom he shares a brief but passionate love affair.

The Incarnations will be touted as a China novel, and in many ways, rightly so. It takes place entirely in China, and brings to life some of China’s most tumultuous moments. But unlike other China-based literature from laowai writers, Barker’s work doesn’t fall back on the Chinese-ness of it all. While not always perfectly erect, it stands fine on its own as a suspense/mystery novel. You don’t need to be a sinologist to enjoy this novel; all you need is to like good books.

Susan Barker is the author of three novels. Her latest, The Incarnations, is published by Doubleday and available on Amazon.

Brent Crane is a Beijing-based journalist. Follow him @bcamcrane.