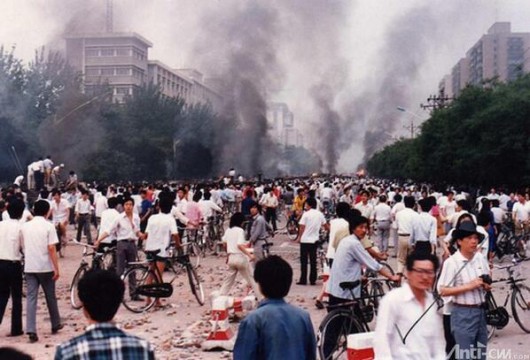 A young Chinese’s path to understanding Tiananmen — and why it’s curbed by the Internet. “The immense interest among those jiulinghou who are in the know has not translated into active discussion, let alone action. Not all of us think it was wrong to use force against the protesters. And we certainly do not all think China should adopt Western-style democracy. But whatever our views are, we dare not openly discuss them online, in public forums, or even in private chats. And since the Internet is where my generation goes to communicate, we are essentially deprived of the chance to engage in civil discourse. // The Internet has chilled an honest reckoning with Tiananmen, not enabled it…. Everything becomes part of our permanent record.” (Foreign Policy)

Same idea… “In a recent conversation with a high school friend, who is now an editor at People’s Daily, the flagship of the state-run media, he brought up the subject of Tiananmen. An avid follower of Western news and user of Facebook, he shrugs off the urgency for Chinese society to revisit the event. ‘What do you think it can bring us, to resurrect liu si?’ he asked. ‘Nothing is going to change. We have to move forward.’” (Helen Gao, NY Times)

Global Times: “Amanda Yang, 23, a student at the Chinese University of Hong Kong, has the chance to see events that mainland students cannot, such as the annual commemoration of the Tiananmen incident in 1989, but she said she has no intention of going to any of them. // ‘I am not interested in discussing politics in that way,’ Yang told the Global Times. ‘I am more interested in finding a job in Hong Kong.’” (Global Times)

You know it’s that time of year when Gmail stops working. “In an apparent sign of government nervousness, connections to the global Internet appeared to have been disrupted, with Google’s mail and other services mostly inaccessible. China already routinely blocks popular overseas social media sites such as Twitter and YouTube and heavily censors Chinese sites for politically sensitive content.” (AP)

Corollary: “At the height of China’s domestic internet crackdown, LinkedIn censors politically sensitive content from its pages.” (Tech in Asia)

Digging deep. “Twenty-five years after China’s Tiananmen massacre, at least two soldiers who were in Beijing on the fateful day have now risen to the very top of the People’s Liberation Army (PLA). // The PLA continues to feel such shame over the blood spilt on the streets of Beijing that decades of service have been carefully wiped from the official biographies of General Zhang Yang and Major General Qin Shengxiang.” (The Telegraph)

Checking in with Chai Ling. “An exiled leader of the Tiananmen Square protests deplored Friday the US stance 25 years ago, saying the ambassador confided to her that Washington didn’t ‘care’ about the crackdown. // Chai Ling, who was commander-in-chief of the students agitating for democracy in Beijing, said that she had hoped the United States would intervene as Chinese troops crushed the uprising on the night of June 3-4, 1989.” (AFP)

#Tiananmen: 11 cables from the US embassy Beijing at the time https://t.co/ArOMmxmVux

The 21 most wanted student leaders during #Tiananmen. Where are they now? http://t.co/sNdNUJMvBq pic.twitter.com/8juBBqD3P7 — SCMP News (@SCMP_News) June 3, 2014

Still a good read after all these years: A collection of NYT coverage of the protests and crackdown in Tiananmen http://t.co/dVuaA6NPsJ

“This 1989 speech is one of the most important in China’s history — and only eight people have heard it.” (VOX)

“’Everything A-OK in the Square,’ report 4,000 undercover police and journalists.” (China Daily Show)

Get Political Prisoners of China playing cards for $6.40, shipped anywhere in the US. (World Freedom Products)

“The 25th Anniversary of Tiananmen and the Chinese Dream.” (The Durian)

“Q. and A.: Liu Heung Shing on Photographing Tiananmen.” (Sinosphere) 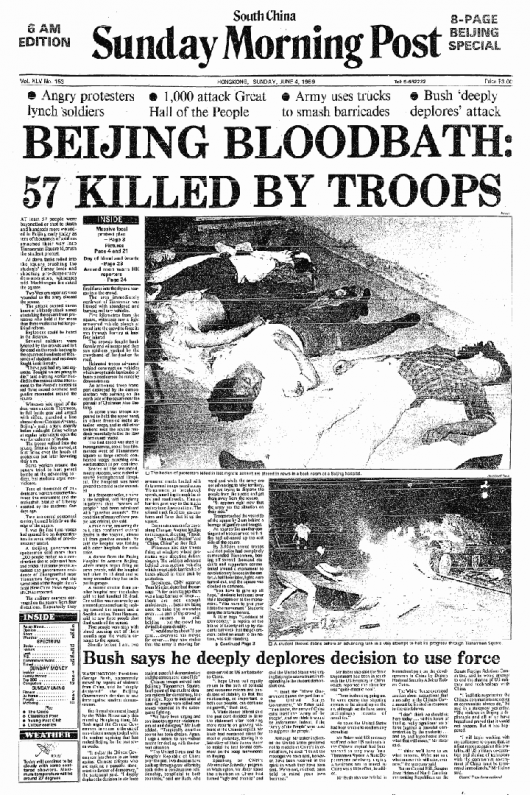 “Voices of Tiananmen,” via SCMP