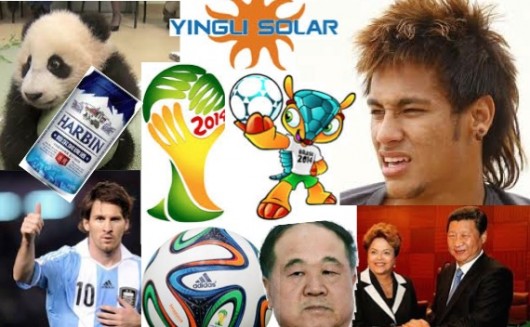 China won’t be playing in Brazil – they have appeared at a World Cup just once and failed to score a goal – but millions will stay up late to watch the games, probably starting this Friday at 4 am when Croatia kicks off against the host nation in São Paulo. Here are 10 things in this year’s World Cup with a Chinese connection.

As with many, many other things, the official World Cup match balls — the Brazuca — have been made in China. Or at least some of them. Adidas contracted its long-time partner and supplier, Guangdong-based Longway, to make the ball after engineers and developers from both companies developed the Brazuca (notable for its thermal bonding, we’re told). But there was one problem: Longway couldn’t cope with the unexpected demand, and Pakistan’s Forward Sports was drafted in to share some of the load.

Shankai Sports, FIFA’s official VIP package supplier for China, says it has sold about 1,500 packages for wealthy Chinese fans traveling to Brazil, more than twice the number it sold four years ago. In addition, there will be thousands of others making the trip from China on their own.

Yup, that’s right, the Chinese Nobel Prize Winner That China Recognizes. Tencent, which has previously hired soccer stars Lionel Messi and Neymar to promote its WeChat app, has sent 33 staffers from China to Brazil to cover the tournament, in addition to the people it already has on the ground. But writer Mo Yan will also be watching the final in some sort of Tencent capacity. No one is really sure if he’s even a soccer fan, but we’ll find out soon enough.

Talking of the final, Chinese President Xi Jinping has been invited by his Brazilian counterpart, Dilma Rousseff, to watch the final on July 13. The big man is known to be a big footy fan and just so happens to have a BRICS summit in Brazil on July 15. It would be great if he wore a Chinese national team shirt to the game, but don’t hold your breath.

Paul the Octopus had an 85% success rate predicting the outcome of games at Euro 2008 and the 2010 World Cup, but he’s dead now. Mani the Parakeet tried to assume the mantle but only got it right 71% of the time. Enter China’s Panda Predictors. Last time we checked, the China Giant Panda Protection and Research Center was still deciding whether its baby pandas would be asked to choose foods with national flags or climb trees with national flags. Either way, it’s sure to make for gripping television.

Speaking of TV, the time difference in Brazil means that the majority of games will kick off at midnight, 3 am and 6 am in China. It’s a brutal schedule suitable only for the most hardened insomniacs or work-shy students. As a result, online scammers are selling fake sick notes for specified future dates to coincide with probable World Cup hangovers. They’re selling for as much as 300 yuan (close to $50), which, judging by the abundance of quality forgers in China, seems to be a little steep.

Budweiser, Castrol, Johnson & Johnson, McDonald’s… and Yingli. That’s right, the Chinese solar company is an official World Cup “Sponsor” (one level below “Partner” and one level above “National Supporter”). It was surprising when Yingli signed on for the 2010 World Cup, but even more eyebrows were raised when it re-upped for 2014. Estimated cost? Up to $30 million. By the way, when you see Harbin claim to be an official World Cup beer, it’s legit — its owner, Budweiser, is allowed to designate brands to represent it in certain territories.

Match-fixing is banned and (hopefully) now out of the Chinese game, while gambling is confined to Macau, but lottery companies are preparing for a World Cup windfall. Sports lottery sales doubled during the 2010 World Cup to 4 billion yuan ($640 million). and US-listed 500.com said online lottery sales in China are expected to jump by at least 70% this year, from 42 billion yuan ($6.7 billion) in 2013, due in part to the World Cup. One small problem: no official licenses have yet been issued.

Ireland played in the 1994 World Cup with a team at least half of whom were patently not Irish, so perhaps China has some defectors in the ranks of other teams, as they do in table tennis? Sadly not, but there are six players from the Chinese domestic leagues who will be in Brazil with their national team squads: three Koreans — Park Jong-woo (Guangzhou R&F), Ha Dae-sung (Beijing Guoan), Kim Young-gwon (Guangzhou Evergrande) — as well as Australian Ryan McGowan (Shandong Luneng), Honduran Osman Chavez (Qingdao Jonoon), and Bosnia & Herzegovina’s Zvjezdan Misimovic (Guizhou Renhe). We wish them well.

Finally, the World Cup mode of computer game FIFA Online 3 hasn’t quite stayed true to form in China. That’s because China publisher Tencent begged developer EA Sports not to make the Chinese players too crappy. Zheng Zhi, for example, was given an average of a five-percentage point boost across the board in various skill categories, while striker Gao Lin was another who got some help behind the scenes. The jokes write themselves.

Mark blogs at China Sports Insider. Follow him on Twitter @DreyerChina. His last piece for us was a preview of the Sochi Olympics.

SCHEDULE (all times China; the first letter represents the group)

A: Mexico vs. Cameroon, midnight
B: Spain vs. Netherlands, 3 am
B: Chile vs. Australia, 6 am

E: Switzerland vs. Ecuador, midnight
E: France vs. Honduras, 3 am
F: Argentina vs. Bosnia-Herzegovina, 6 am

B: Australia vs. Netherlands, midnight
B: Spain vs. Chile, 3 am
A: Cameroon vs. Croatia, 6 am

D: Italy vs. Costa Rica, midnight
E: Switzerland vs. France, 3 am
E: Honduras vs. Ecuador, 6 am

F: Argentina vs. Iran, midnight
G: Germany vs. Ghana, 3 am
F: Nigeria vs. Bosnia-Herzegovina, 6 am

B: Netherlands vs. Chile, midnight
B: Australia vs. Spain, midnight
A: Croatia vs. Mexico, 4 am
A: Cameroon vs. Brazil, 4 am

F: Bosnia-Herzegovina vs. Iran, midnight
F: Nigeria vs. Argentina, midnight
E: Ecuador vs. France, 4 am
E: Honduras vs. Switzerland, 4 am