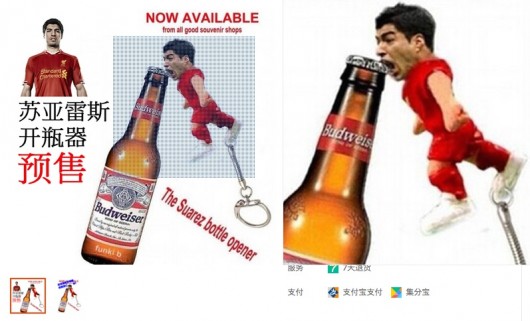 Some clever Taobao vendors have decided to capitalize on Luis Suarez’s penchant for human flesh by creating what appears to be a bottle opener fashioned from a likeness of the Uruguayan striker’s jaw. And look – it can be had for only 17 RMB!

As Wall Street Journal’s China Realtime Report points out, the image is taken from a photoshopped picture that circulated following the Uruguay-Italy game that saw Suarez sink his gnashers into Italian defender Giorgio Chiellini.

“One mouth, one opener….one bite and it’s open,” read one advertisement.

The quality of these products is not to be trusted, but this is apparently a very real thing. Heres ECNS.cn:

A search for the item on Wednesday returned more than twenty results on Chinese’s largest online market Taobao, with prices ranging from 888 yuan to 9,999 yuan ($142 to $1604). Some had already been added to customer watch lists.

Others were more serious about turning the meme into cash. One vendor with the screen name Lin Mumu0393 said he had received 108 orders and that he was still working with manufacturers to make the product. He said he would have limited supplies in two weeks.

Get em while you can!