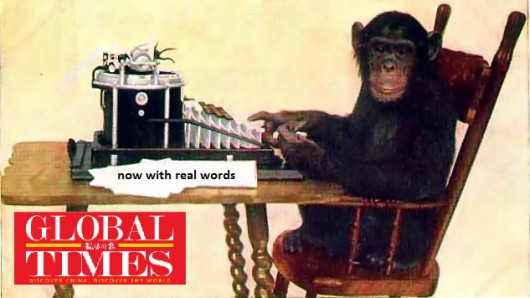 The pundit aftermath of the crash of Malaysia Airlines flight MH17 is now upon us and the Global Times’ recent opinion piece on the topic is full of actual words and letters that call allegations of Russia’s involvement “yet another example of the power of Western opinion as a political tool.”

While their ability to cobble together phrases might indicate intelligent life, we must turn to experts like early 20th century mathematician Emile Borel for guidance without preconditions or preconceptions.

Emile Borel once famously wrote of what has since been termed the Infinite Monkey theorem. It can be succinctly summarized as such. Given enough time, a monkey randomly striking keys on a typewriter will end up producing a copy of Shakespeare’s Hamlet.

Indeed random chance when combined with finger-like appendages can theoretically produce any work. For example in this example certainly not ripped directly from Wikipedia:

Less than one in 15 billion, but not zero, hence a possible outcome.

This being the case, we cannot eliminate the possibility that coverage by the Global Times and the insistence of several mainstream Chinese news sources that Russia is likely not to blame was not produced by a room of jabbering hominids throwing feces.

China’s rush to claim that the Global Times is written by Chinese people is not based on evidence or logic. The Global Times and state media more broadly is understood to be the mouthpiece of some of the least articulate members of the Communist Party, publishing such claims as Kim Jong Un’s election as the world’s sexiest man. Acknowledging that thinking people could produce such obvious drivel would only make China look foolish.

The truth is the most persuasive tool of all, and a fair investigation of the identity of the Global Times editorial board is in the interest of all sides. It must be clear of any political interference, as all investigations in China are. The truth must be made public once it is found out.

People need the truth rather than having to live in a reality where thinking people actually write articles like this in The Global Times.