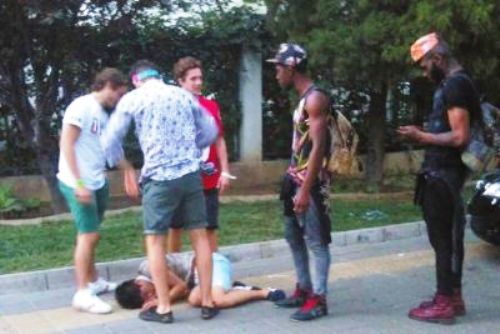 It’s Friday night just past midnight. You’re standing on a curb in Sanlitun after a pint/dinner/book talk/whatever looking for a cab. You see a green and yellow car driving your way, the little red light in the windshield beckoning. Already thinking of that book on your bedside, you raise your hand high and step forward in anticipation.

Then something weird happens. The cabby sees you and swerves. He’s gone out of his way to avoid you and then drives twenty meters down the street to pick up that Chinese couple so drunk their embrace may be the only thing keeping them upright. Are you the victim of a racist driver? Or are you a victim of the douchey laowai?

On Weibo recently, the Ministry of Public Security posted a series of pictures from early Sunday morning near Gongti West Gate showing a group of foreigners taking liberties with a drunk Chinese guy. As The Nanfang explains:

First they used their feet to step on the man’s body and head. Then, they took turns to hoist the man up by their shoulders, and then put him down. They took pictures throughout.

Xu said the foreign men “fiddled” with the drunk man for 20 minutes. The men also displayed poor manners by displaying their middle fingers to pedestrians and using coarse language.

A rickshaw driver present at the scene said he saw the foreigners “torment” the unconscious man. 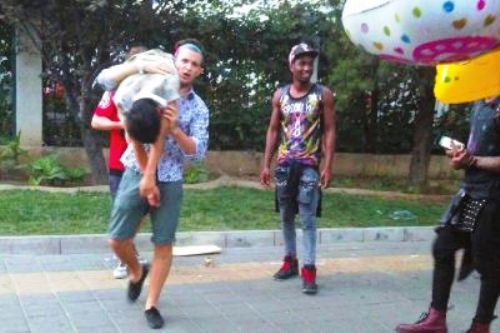 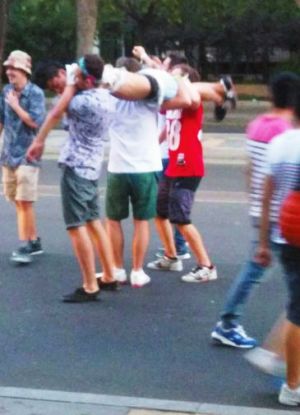 Being discerning news recipients, you know the difficulty in extracting nuance from smart phone snaps, so will come to some reasonable conclusions: a) the Chinese guy is well and truly out of it (like, gone), b) the laowai don’t know him, and c) they are being loutish at best.

Now imagine you are China’s Internet mob and you might come to conclusion d): foreigners being foreigners.

This isn’t a good thing.

“Beat them,” says uncle_impearl; “Dogs,” says 个人化1994.  小红娃娃 believes that, “Beijing society’s public security has lots of hidden dangers, this is the foremost!” while为蚊子补水的狼 thinks, “It’s no different from the Japanese invasion of China, just a different style.”

You’ll notice that conclusion d) uses a broad brush; it doesn’t separate the businessman from the student from the tourist from the Beijing lifer. It takes Youku videos of red-in-the-face laowai and collates them with all their personal interactions and experiences.

Lacking a scientific study with a representative sample and well-constructed hypotheses, here is a thesis: The more laowai act like douches around Sanlitun, the more pervasive d) will become. The more pervasive d) becomes, the worse life becomes for all of us. Don’t be a douche.

Christian works freelance in Beijing and tweets at @cdcshepherd.