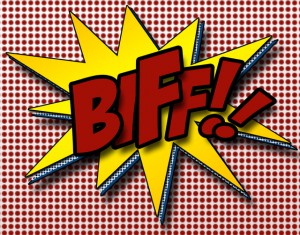 WHAT was missed: The 11th Beijing Independent Film Festival (BIFF)

WHEN things went down: August 23rd (scheduled to run through August 31)

WHERE films were to be shown: Beijing’s Songzhuang artists’ district, at the Li Xianting Film Fund

BIFF, as the Beijing Independent Film Festival is onomatopoeically acronym-ed, has delivered on the drama — just not cinematically, as the eight-day festival was scheduled to do.

Although 76 films were denied an audience, BIFF still offered a corporal challenging of ideologies. On kick-off day, friendly local police escorted festival organizers back to theirs, where they all had a spirited chat about the indie film scene. For about five hours. Meanwhile, back at the theater, plainclothes enforcers adopted a “please turn off your cellphones and no flash photography” approach to the screenings. They wanted to ensure that the films were given the appropriate amount of respect – by not allowing anyone to watch them. As BIFF’s artistic director, Dong Bingfeng, said last year: “Film is the most dangerous thing by far.”

This street theater might be as good as the films themselves, but we’ll never know. So how about a gag review? Because: absurdity. Here is a taste of what never was, broken down by could-be categories and awards of subversion, dreamed by yours truly, selected at random for no reason (this is what you get when the professionals are silenced):

Though the pedestrian titling may encourage a troublesome pronunciation for non-native English speakers, kudos to the women involved who learned to love their 阴道.

The Chaotic Space of Nihility and Dissolving, Melting and Shattering Phenomenon of Time by director Wu Xiang

A dark-toon depicting human nonexistence. Show it to your kids next time they seem a little too well-adjusted.

The Mighty Boosh meets dissonance about ongoing political strife in the Philippines. True to Pinoy form, everybody sings and dances.

Why Spend The Dark Night With You by director Antoine Mocquet

Everything we love about Gulou. Or hate. #Whatever.

Sounds awesome, no? Get your tickets… NEVER.

For readers with acute F.O.M.O. (fear of missing out), you’re probably close to tears. What a phenomenal selection of artists and films, such potential! To the embattled filmmakers and their crews brave enough to try and take part, jia you!  Hope to catch you in a theater near us, someday. BIFF!!

3 Responses to “What We Missed At The Beijing Independent Film Festival: A Review Of Things That Weren’t”