“We were hit by the sudden cold and absolute blackness. The only light came from our torches. Not a drop of sunlight penetrated the silt and algae above us. It was like entering another world, with all our senses altered — until we spotted the Wall.” 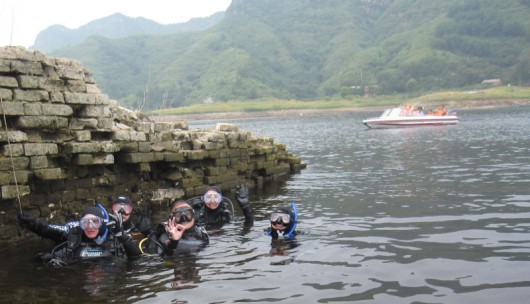 My three companions and I were rewarded for our three-and-a-half-hour drive from Beijing by a body of water tucked into the hills. Panjiakou Reservoir is a man-made lake, created in 1977 when the Chinese government flooded a valley northwest of Beijing, and it was there that we would experience the Great Wall of China in the rather unique state of under water.

Arriving at the pier, we hefted our gear from our cars onto a motorboat, which took us past fish farms, underneath makeshift electrical lines strung across the water, and over waterlogged ropes. Along the steep overgrown banks, the terrain rose up to rough ridges where abandoned Wall towers punctuated the hilltops. A half-hour later we reached a floating restaurant that would serve as both the departure point for our dive and portal for our accommodations.

We were greeted by the family who owns the place and some other guests partaking in lunch on deck. We soon feasted as well on the floating veranda. We indulged in pumpkins, eggplant, and zucchini picked from a garden overlooking our bobbing cafe, plus gigantic fish that moments earlier were struggling in nets on the nearby boats. Chickens have run of the bank, with their eggs serving as part of our meal.

The restaurant proprietors also run the adjacent hotel, and they’ve lived in this valley for as long as they can remember. Dynamite destroyed their ancestral home during the 1977 demolition that preceded the flooding of the valley, and like other villagers who were forced to relocate, they took up new occupations. They’re now in the tourism business, a destination for both day trips and overnight stays.

The Wall butts up against this hotel before spilling down the hillside and crumbling into the water. Those wishing to journey farther up need only walk a few meters to start their climb. It’s a well-worn yet narrow and unkempt trail that leads up the mountain to some gorgeous vantage points overlooking Panjiakou Reservoir. A scramble up the hill gave us an overview of our dive site.

Also helping with a sense of overview was a fantastic black-and-white photo on one of the walls of the restaurant. It shows the town and valley before they were destroyed. You realize just how deep the floor is — somewhere around 60 to 90 meters below the surface of the water — but there is purportedly nothing left to explore. The only surviving structure is the Great Wall. 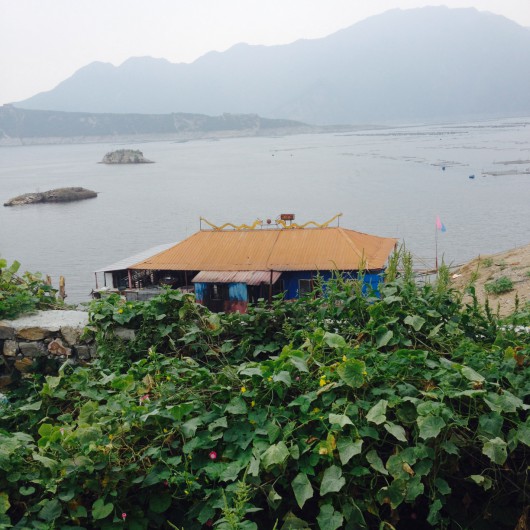 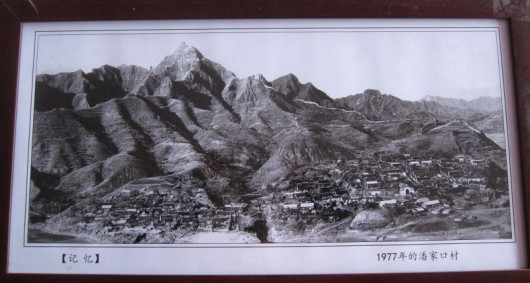 Even in summer, it’s a cold dive — the surface temperature is 24 C, but it plummets to 6 C at the bottom — so either a dry suit or a couple of layers of wetsuits is highly recommended, along with boots, gloves, and hood. All of it had to be hauled from Beijing, since there are no facilities near the dive site to garner forgotten equipment or fill tanks. The locals found humor in a handful of foreigners donning eight millimeters of neoprene in the middle of a hot muggy day.

As soon as we struggled, sweating, into our layers, we jumped into the water to do our final weighting (we’d all been diving in saltwater and needed to recalculate for the freshwater). We messed around with the weights and, once happy, crawled back into the boat that motored us the few remaining hundred meters to where we would descend.

Guo Yong, our dive master, deftly led us to it. Even submerged, it is an impressive structure. With history at our fingertips, we imagined the times of war and peace it’d weathered and survived, the lives that had come and gone around it. It was humbling. There is a submerged tower and you can swim through its rooms — what builder, attacker, or defender could ever have foreseen the day when scuba divers would blow bubbles toward its ceiling?

Be warned, it is not an easy reef dive — it’s a technical dive. Depending on the water level behind the dam, it can be quite challenging at almost 30 meters. There is little freshwater life to be seen — if lucky, maybe a few small crayfish will wave their antennae at you. But the ancient wall is reward enough. There is not much diving in this part of the world — Thailand and the Philippines have the market cornered with their coral reefs — but for experienced divers looking for a unique spot, this opportunity is a treasure. 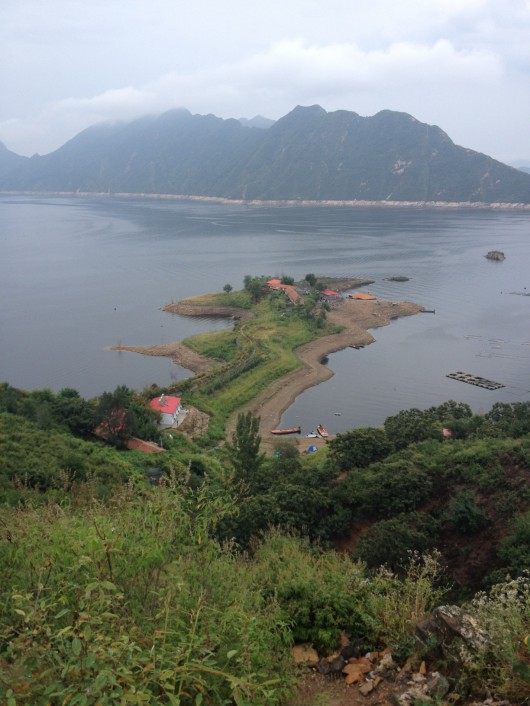 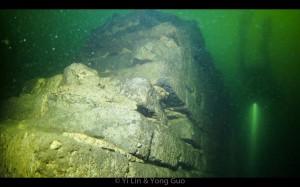 Christina is a professional rambler currently attempting to figure out life in Beijing — and stumbling upon crazy stuff as she goes.

Panjiakou Reservoir Great Wall: contact Guo Yong (vvdiving@gmail.com / phone: 400-028-7778) of VVDiving, a PADI Dive Center near Sihui subway station in Beijing. Guo Yong speaks English and teaches PADI courses in English as well as Chinese. He knows the Wall dive site very well and went above and beyond in arranging logistics for us. VVDiving also does trips to the Philippines, Maldives, and other South Asian destinations.

2 Responses to “The Great Wall Of China As Sunken Treasure”