Our beloved China, the new social-political-economic butterfly on the scene, wowed at APEC before jetting off for the ASEAN East Asia Summit and the G20 Summit.

Hosting APEC for the first time since 2011, Beijing did things 大气, spending $6 billion on a lakeside campus, a new elevated expressway, and a no-costs-spared spectacular opening complete with fireworks. But how did they really do?

The leader of the world’s largest economy kicked off the event with a bold statement, boasting a $40 billion price tag for the revival of an old classic: the Silk Road trade route. The fund’s goal is to “break the connectivity bottleneck” in Asia, focusing on connecting nations Bangladesh, Cambodia, Laos, Mongolia, Myanmar, Pakistan and Tajikistan. The Asia Infrastructure Investment Bank (AIIB) will be set up as the major mechanism for funding infrastructure development. Oh, you got your own development bank now, huh? Xi, you so smoov.

With 21 of the hottest Pacific Rim economies mingling to promote free trade and economic cooperation throughout the region, dangran there was a bit of drama! Analysts and amateurs alike gossiped over… 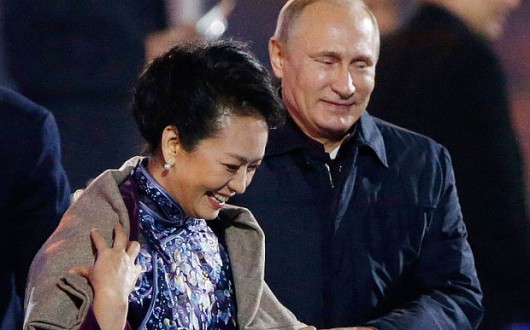 …bad boy Putin’s interaction with errbody. Hot topics included Russia’s invasion of Crimea, its poking at ailing eastern Ukraine, that time it shot down MH17… oh, and did you see Putin hitting on the missus, Lady Peng Liyuan?? Omg, I bet he was like, “here you can take my shirt, too.”

…APEC Blue: The color of this season. You gotta spend money to make money, and apparently you make money by turning the sky blue again for the economic giants of the world. For a costly hiatus, Beijing took half of the cars off local roads, closed more than 1,000 heavy industrial plants, and delayed central heating services in Tianjin.

…shirt-frontin’! With this type of posturing, why not flatter your figure(head) with a Star Trek-inspired tunic! Shiny yet understated, the APEC uniform even included a communicator-esque badge. I myself am thoroughly delighted that we’re evolving into The Next Generation.

Kinda a Big Deal in Asia

After the pomp and circumstance, the press junket did graduate to a body of bilateral negotiations. What was kinda a big deal?

ITA: a U.S.-Sino commitment to eliminating tariffs on such items as computers and computer software, telecommunication equipment and other advanced technology products.

Climate: a U.S.-Sino pact to reduce emissions, which emerged from seeming nothingness

Visas: a U.S.-Sino pact (seeing any patterns?) allowing Chinese visas for 10-year American tourists/businessmen and 5-year students. The application process for which I’m assuming is proportionately long, and will be subject to change NOW.

Putin’s not just keeping Xi’s wife warm – an agreement for 30 billion cubic meters of natural gas pipelined in from Western Siberian deposits to China should keep China toasty for 30 years.

FTAs, he-eeyy: South Korea and Australia are #winning. Tony Abbott is besides himself, apparent in a 30-second handshake during which it was unclear how much Xi Jinping was listening.

- Tony Abbott shook hands with Xi FOREVER at APEC. You should know why.

- A throwback article to Xi’s call for a “regional security architecture” at CICA.

- Popup Chinese’s Sinica podcast, again with their finger on the pulse.

4 Responses to “Sindicator, APEC Special: In Case You Missed It…”