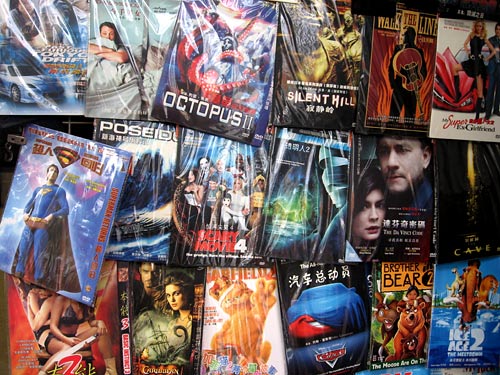 Ed’s note: Sam Voutas, the director of Red Light Revolution, is back with another film project: King of Peking, “a film about juggling fatherhood and piracy.” Check it out, then read on.

Lately I’ve been thinking about a particular aspect of Beijing history that doesn’t get written about much: bootlegging. VHS never caught on in China as it did in the West. It was only when CDs, VCDs, and DVDs landed that things shifted dramatically from state-sponsored TV and film to virtually anything that could be dubbed to disc. Suddenly the French New Wave, Chuck Norris, and Buster Keaton — even whole historical collections from foreign national archives — were available to anyone who had a few kuai to rub together. Even some of China’s best independent filmmakers admit that piracy not only introduced them to cinema, but also brought their own films to a wide audience. Piracy, love it or hate it, has totally changed movie and music culture in Beijing.

A bit of a trip down memory lane, here’s my take on the history of bootlegging in the Jing.

Back in the day, if you were a foreigner and you didn’t much like CCTV, it was all about who in the community had what videos. So in each diplomatic compound there’d be an apartment where some expat would run a library of movies. It was like the Blockbuster of badly dubbed videos. I heard there were similar clubs set up in university dorms. This niche trade has been almost entirely neglected by the history books.

This is roughly the year when bootlegging entered the traveling salesman model. A man enters a pub in Sanlitun carrying a faux leather black briefcase, then sells his wares in front of bored wait staff. Primarily used to distribute music, this also moved into movies with the arrival of DVDs in China in 1998. As DVD stores popped up in Sanlitun and other areas, these entrepreneurs were increasingly pushed out of the game, unable to compete.

Is there anything that personifies pirated movies in the capital more than a guy standing on a corner with a handful of Hollywood blockbusters? Whatever your feelings on the legality of his trade, these individuals were fast on their feet, hawking their wares in places like Chang’an Dajie, and able to pack up and run at the first sign of a green uniform. Smart, likeable, and with a knowledge of Hollywood cinema that could rival Roger Ebert, the corner seller was as Beijing as hot roasted chestnuts in January.

The precursor to online shopping, home-delivered DVDs were developed to cater for the discerning customer who likes good movies but can’t be bothered to leave the couch. The client need only send an SMS and a delivery guy arrives with a hundred-page catalogue. This was particularly popular for office types who argued they just didn’t have the time to go shopping.

This entry into bootlegging history arrived as soon as entire films could fit onto a flash drive. The cousin of this is the external hard drive that includes digitized movies in a particular genre. A connoisseur’s movie collection could now be divided into drives: Action, Romance, Estonian Cinema of the 50s, you name it.

Much like the rest of the world, bootlegging has moved primarily to online streaming and torrenting sites. The Mom and Pop shops have had to make way to large companies with multiple employees, start-up capital, and a revenue system that comes primarily from advertising and data collection. And while fans of physical DVDs still keep a smattering of stores open, the age of the physical bootleg copy is slowly passing. The era of the guy shouting “DVD! DVD!” on the sidewalk is ending, much like the disappearance of traditional knife sharpeners from hutongs.

Sam is an independent filmmaker raised in Beijing. His comedy about movie piracy, King of Peking, is currently crowdfunding on Kickstarter.

5 Responses to “A Brief History Of Bootlegging In Beijing”