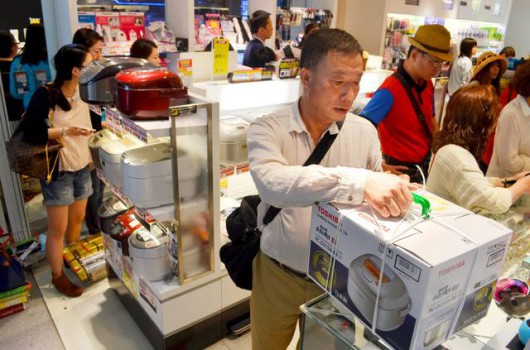 The seats, which provide sterilization, warm rinse and massage features, have become the top products on shopping lists, and many tourists are buying two or more seats as gifts for friends and relatives. The toilet seats are typically priced 2,000 yuan before tax.

“They are always out of stock. If we replenish our stock in the morning, everything will be sold out by the afternoon. The Chinese tourists buy everything in only a few hours,” said Li Wei, a saleswoman at an appliance shop in Tokyo’s Akihabara district.

“Every shop on the street was sold out of toilet seats during Spring Festival,” she said.

The gadget obsession has been growing since 2010.

“I think they are built better, and they look delicate and have more user-orientated features,” said a tourist who would only be identified by her surname Zhao.

Ironically, it’s exactly such products that helped Chinese manufacturers build their reputation for rock bottom prices the past two decades. That Chinese are suddenly shopping for the same products in Japan betrays a staggering crisis of faith.

Growing affluence and a willingness to spend have led much of the world to brand Chinese tourists as walking wallets.

Statistics from the Tourism Department of the State of California show the per capita consumption of Chinese tourists reached $2,932. Chinese tourists beat out Brazilians, the No. 2 shoppers, by more than $500 in 2012.

In 2013, Chinese tourists overtook the Indonesians as the biggest spenders in Singapore with per capita consumption of SG $1,136.

China’s increasingly wealthy buy whatever they want while abroad to satisfy their suppressed desires for material goods. However, their adoration of foreign products has become a controversy at home.

“It’s a national humiliation that China refuses to consume its own products,” said Wu Huifang, a Hong Kong judge who ruled on a case of baby formula smuggling on February 6.

Wu said public distrust for domestic products has somehow resulted in the formation of international smuggling rings for a baffling assortment of benign goods.

But it’s not entirely hard to understand given the country has been rocked by scandals that involved child-killing baby formulas and cancer-causing cooking oils.

“The demands of Chinese consumers are diversifying. They are no longer satisfied with low-cost and reliable products. They want novelty and durability,” said Zhang Qin, a business reporter for Beijing Youth Daily.

The rush for Japanese toilet seats reflects how domestic products have failed to keep the pace with consumer demands, Zhang said.

In the meantime, e-commerce and Internet access have strengthened consumers’ search for individualized and diverse products, said Ding Yang, an analyst at Tencent.

In front of increasingly mature and picky consumers, Chinese manufacturers have to accept that their advantages are disappearing as costs rise and innovation remains stagnant.

Data from the US-China Chamber of Commerce show that 61 percent of enterprises in China regarded rising labor costs as their most urgent challenge in 2015. Boston Consulting Group shared the view and said Chinese manufacturers will entirely lose their advantage within five years.

“The Made-in-China miracle depends on an incredible advantage in raw material costs, taxes and labor,” said Wu Xiaobo, a financial writer in Hangzhou. “But the steady erosion of all three is leaving Chinese manufacturers in a bad situation, and the low prices are decreasingly attractive to domestic shoppers.”

While Chinese manufacturers have been attempting to swap technology to catch up, that shortcut ignores their fundamental shortcomings in innovation and brand development, Wu said.

This is especially true for domestic appliance vendors.

Chinese small appliance firms like Haier and Midea have attempted to cooperate with Sanyo and Panasonic since the 1990s. Known for their outstanding imitative ability and low-price marketing, the domestic vendors quickly grabbed market share.

But the Japanese companies, realizing it was impossible to compete on price, focused instead on cultivating high-end clients and loyal users. The firms have also slowed the export of their core technologies to Chinese rivals and have suspended many of their China operations.

“China’s manufacturers can hardly copy American-style innovation that is focused on breaking new ground,” said Zhu Haibing, chief economist for JP Morgan in Greater China. “The more realistic path is for them to enhance efficiency and improve the quality of China’s existing manufacturing industry. Only in this way will the industry find its confidence and regain the trust of native residents.”

2 Responses to “Why Do Chinese Consumers Prefer Japanese Toilets?”