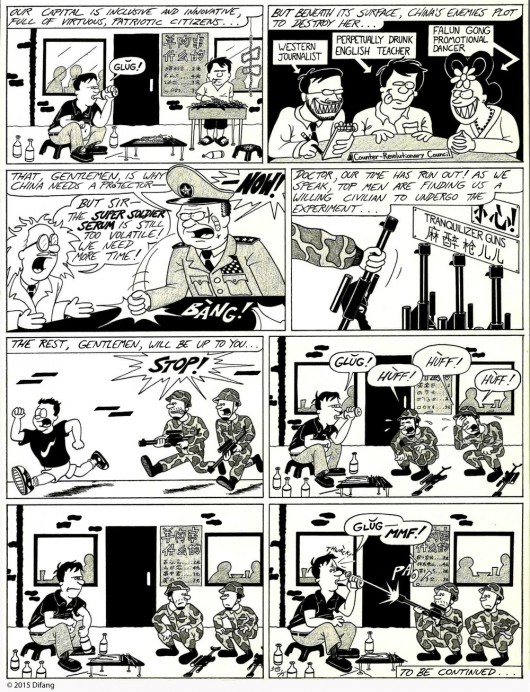 Duncan Icarus Fang, or “Difang,” as his Chinese friends know him, was born in Hong Kong in 1953. The son of British functionaries in the colonial government, Fang grew up in the idyllic haggling district of New Kowloon. Early on his parents noticed his impressive artistic abilities, particularly with Magic Markers, and enrolled him in the the prestigious Zha Jiang Mian Pre-School for the Arts.

In his teens, as the Cultural Revolution was beginning to blossom in the mainland, Fang defied his parents to pursue his dream of contributing to socialism in the People’s Republic of China. In 1970 he took a three-wheeled taxi to Shenzhen and hitchhiked the rest of his way to Beijing, where he was quickly imprisoned.

Fang spent his incarceration learning the melodious Beijing dialect and writing “big character poems” with his treasured Magic Markers. The most famous of these was his “Letter to the Sun-God All-Powerful Very-Handsome Chairman,” which included the excerpt:

Great Handsome Omnipotent Chairman
Red with the power of the sun
Please let me out of prison
This has all been a misunderstanding.

Three months after the death of Mao Zedong, Fang was finally released from prison and sent to the countryside of Inner Mongolia for reeducation through labor. For the next seven and a half years, he worked with local farmers on a government project to produce gasoline from sand.

By the spring of 1984, word had reached the central government that Fang drew excellent cartoons of yaks and flattering caricatures of Deng Xiaoping. In April, he was reassigned to the People’s Committee of Panel-Based Cartoon Cultural Enrichment, where he was instructed to produce a comic strip promoting China’s new brand of free market-based socialism.

Unfortunately, shortly after Fang’s arrival in Beijing he suffered a nervous breakdown and spent several months in the psychiatric ward of the Beijing Sino-Japanese Friendship Hospital. Upon his release, Fang quickly developed an addiction to a traditional Chinese medicine he had received at the hospital, and was readmitted a month and a half later.

By Fang’s own account, the next 21 years are a haze of recurrent TCM addictions, alcoholism, and evenings spent at an outdoor hamburger stand in Sanlitun.

In the fall of 2014, a member of the Cultural Enrichment committee spotted Fang at the hamburger stand and invited him to come back to work— but only on the condition that he wean himself off alcohol and TCM. Over the next few months, Fang managed to get himself clean, and by the spring of 2015 he was collaborating with China’s top social scientists to produce the comic strip you see before you. The rest, as they say, is history.

Next in Captain Beijing