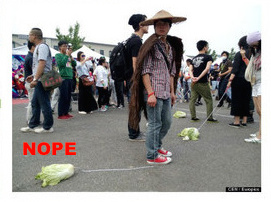 If you’ve read a story about China in the last couple of years that seemed just too good to be true – that smelled, in fact, a lot more like horse manure – it probably came from the Augean stables of Central European News (CEN), a Vienna-based “news agency” whose bluff just got called in exhaustive length by BuzzFeed UK investigative reporters.

Although their offices and staff are in Austria, CEN’s scope is worldwide, with stories from Russia, Argentina, India, Macedonia and the PRC, where it regularly elbows Xinhua aside to publish the least likely version of events.

According to numerous examples cited by BuzzFeed, CEN was the dealer first pushing the “walking cabbages to cure depression” hoax from 2013 (it was, as the Chinese sources originally noted, a long-running piece of performance art that happened to occur at a music festival), as well as the Mail’s story of a tapeworm infestation in Guangzhou caused by a sashimi binge (the accompanying images, according to Snopes, were actually lifted from X-rays published in the British Medical Journal depicting the “aftermath of a parasitic tapeworm infection caused by… undercooked pork”) and, of course, that ridiculous piece of click-bait about an attractive backpacker sofa-surfing through China looking for “temporary boyfriends.”

What appears to be the House Special at CEN is Bobbiting – tortuous tales of todgers lost, ideally accompanied by graphically pixelated photographs. If it has “(NSFW)” in the headline and no penis, CEN is all over it like Loretta on John Wayne: an aunt who castrated her nephew in Henan, “a 26-year-old Chinese man named Yang Hu who had allegedly chopped off his own penis due to frustration with his nonexistent love life,” or, most recently, a “man whose penis was chopped off twice in the span of a few hours.” And it helps that those pixels, sparing fragile readers the gorier details, also cover up any pesky watermarks.

The agency’s MO, as BuzzFeed describes, appears to be guileless – CEN accepts any viral social-media story it sells as de facto, no questions – and, of course, profitable (translate, sell, screw the hat-tip) but is actually disingenuous, often materializing eyewitnesses and juicy quotes for that added value. When CEN reports from China, helpful “police spokesmen,” hospital staff and garrulous bystanders are always on hand to offer the Austria-based press agency the straight dope.

Example: an underwear thief is taught a righteous lesson when his victim catches him, and forces him to parade on camera covered with his loot. Victim posts the pix on Weibo, the story appears on Xinhua and, sure enough, gets picked up by CEN – except their enterprising stringer manages to interview a neighbour and jimmies the following pearl from the cops: “We don’t condone vigilante activity but in this case it seems to have turned out OK.” Certainly it did for CEN, who also marketed another story involving a Shandong farmer whose goat birthed a two-headed kid, which came complete with “digitally enhanced” pictures. BuzzFeed says CEN also sourced this from an uncredited Xinhua. The farmer wouldn’t talk to the state agency for some reason but was happy to mouth off at length to a Croatian Times reporter, “despite the story taking place in a remote rural community a six-hour train ride from Beijing.” (The CT reporter forgoes any byline for this modest scoop.)

CEN is run by Michael Leidig, journalism’s answer to Grant Shapps, an Internet spiv who’s his own greatest online cheerleader. Like Shapps, Leidig has a “frequently updated” Wikipedia entry (sources include the Austria Times, owned by Leidig) and enthusiastically doctored edited by a user called Bylinebandit, who has the same handle as the Twitter account of one “Michael Leidig.” Its sole tweet asks a cromulent question:

But don’t ask this self-powered hamster wheel of bullshit: if you want to be certain of anything CEN reports, check it with Xinhua first. 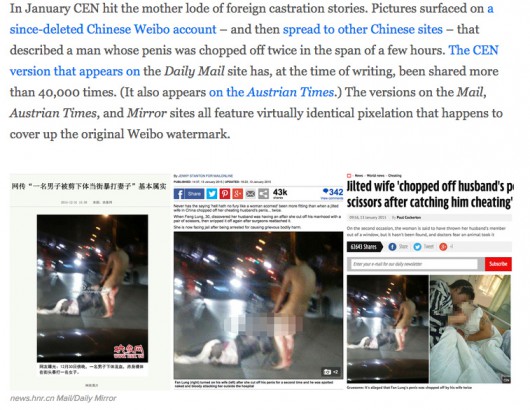 The King of Bullsh*t News (Buzzfeed)