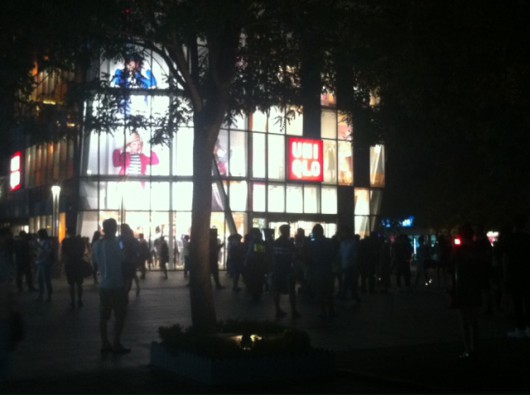 I passed by Uniqlo just now on my way home, the infamous Sanlitun branch where a young man and woman had sex in the fitting room and put the video of it online. (You can watch it here.) Maybe that part of Sanlitun Village always has a large crowd of young folks milling about. Maybe there are those who ironically take selfies in front of retail chains, and journalists often un-ironically do work there (CNN!). I don’t know. Or maybe shoppers are lining up for this season’s hottest new item:

I don’t know. A couple had sex, and Uniqlo is by far, now and forevermore, the biggest beneficiary. Come on. That’s kind of bullshit.

Uniqlo says they weren’t behind this, and the fact that they’re probably not lying makes the story all the more disappointing. If a real human being concocted this bit of marketing derring-do, it would justify and vindicate the entire history and field of public relations. Dov Charney – American Apparel’s skeevy founder – hired porn stars and models to attain Uniqlo’s current wildfire of buzz, and failed. Companies sink thousands every year into advertising campaigns without entertaining the possibility that mainstream media will notice. And Uniqlo? Did it spend money to make money? Did it bother to pollute our eyes and ears with subliminal messages of bonking? Did it so much as try to position itself in our subconscious as a place where quickies were cool? No. It did nothing but offer medium-priced everyday wear and fair-quality jeans. And now it’s laughing its way to the bank, because two people had sex. Life isn’t fair.

Well, I suppose there is one drawback: someone will have sex again in a Uniqlo fitting room. Probably not by tomorrow, because there’ll be some Argus-ass eyes affixed to those doors. But it will happen. And may it continue happening until it becomes commonplace, and we can continue to stroll by this store in the heart of Sanlitun without raising our camera phones as if in the shadow of Angkor fucking Wat.