“Thanks to the hyper-paranoid system, authorities are doing themselves further disservice by fighting another fire online, badly.” 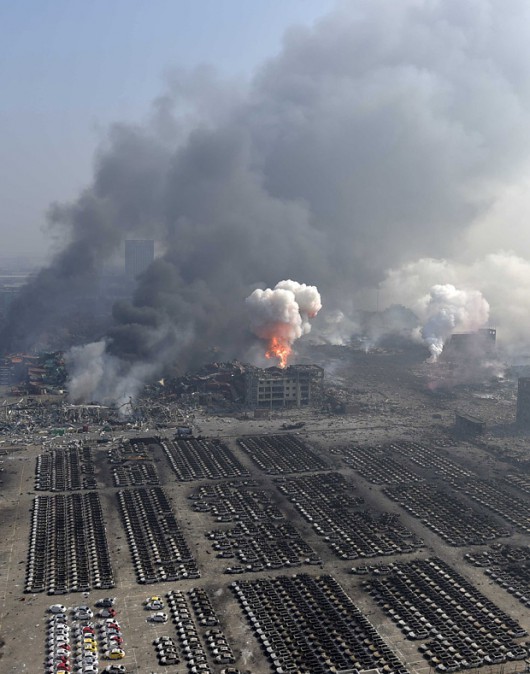 The Oriental Star ferry “disaster management” model, in which the goon squad manages to seize control of the information spigot early on and develops the subsequent narrative, is not the “new normal” in China that some may have feared.

Not that censorship is relaxing at all, or that the guidance of public opinion isn’t a priority after Tianjin’s chemical-explosion disaster (114 dead and counting, at least 70 missing and over 700 casualties). If anything, the censors are the only ones appearing to keep their heads in this whole sorry mess.

The Internet regulator seems to be the only functioning government agency at the moment. https://t.co/mH1BuGFdpD

But it seems the Yangtze disaster containment was probably more of an outlier than a precedent – the ferry’s sinking was rapid, going over in just a few minutes in poor weather conditions on a wide river, deep in the Chinese interior, miles from any major city. There were no pictures or videos of the incident. The few key witnesses, including the surviving crew, were nobbled immediately. (So far as I know, nothing’s even been heard from the captain since his detention, except brief statements via official channels.)

Their success managing the Oriental Star crisis was probably a magical time for propaganda officials – well done handling that dangerous mob of grieving relatives, Comrade Zhang, that was deputy secretary material! But busy as the censors and crowd control were, geographical and logistical restrictions did much of their work for them. It’s hard to report on a story that’s halfway up a muddy provincial river, in which the “crime scene” is underwater and the rural population is motivated toward helping the authorities, rather than media.

The police helped out a little, roughing up relatives who spoke to journalists and generally protecting and serving the government. But I suspect many might agree that heading to Jiangli, the nearest town where the mop-up operation was centered, didn’t really help anyone get to the bottom of the story. If anything, it provided a convenient locus for authorities to contain. (When the Economic Observer, a Chinese newspaper, went to the ferry company’s Chongqing offices and caught them shredding documents – red flag alert! – police summoned the reporter and deleted the report.)

The #TianjinBlast, on the other hand, is a nightmare for censors. Binhai New Area, where the detonations occurred, may not be “Tianjin” in the downtown sense that most people would recognize. It’s an 800-square-mile port, storage facility and giant development zone touted, among its many facets, as a petrochemical-processing hub, home to numerous multinational companies by day and poor migrants/shift workers by night. The latter took the brunt of the initial blast, which was quite some distance from the actual city but clearly not far away enough, by legal zoning standards, from residential buildings within 2,000 km of ground zero. But Tianjin is a high-speed 30-minute hop away from Beijing, where many journalists are based and able to get there – and back – within the day.

How much coverage would this story have received if the blast had occurred in, say, the province of Jilin, where 119 people died at a poultry factory that went up in 2013? There, residents of Dinhui City, heavily promoted as an economic opportunities zone much like Binhai (in this case, an agricultural manufacturing base used for commercial food processing), were awoken in the early hours by a series of massive blasts from the nearby plants, releasing toxic gas and chemicals into the surrounding area. Most of the dead were unskilled workers unable to escape the blaze because their factory doors were sealed. Like Tianjin, there was much handwringing in the aftermath about safety standards, reckless economic growth, ticking time bombs, “the worst fire in living memory,” etc., but that was pretty much it.

Already, the unfolding disaster in Tianjin has yielded much of the same, a rich basket of negligence, dodgy oversight, grim safety standards, environmental hazards and general indifference toward life. Thanks to the hyper-paranoid system, authorities are doing themselves further disservice by fighting another fire online, badly. Take the political cover-up of the company responsible, Ruihai International Logistics (RIL): rumors that ownership of RIL is connected to a senior relative (a former Politburo member? The ex-police chief?) are already rife. So while attempting to explain why its corporate records have suddenly vanished post-blast, officials have bravely tried to claim RIL’s website also got “blown up.” Consider that RIL has yet to even issue a statement on the tragedy caused by its warehousing. Or re-watch the CCTV flub in which a live presser was fumbled after officials were unable to answer a simple question; CCTV cuts right back to the studio, catching the host by surprise.

The fallout, including fears of chemical clouds making their way to Beijing, is growing uncomfortably close to the bigwigs. That’s half an hour away! They have a big, gung-ho military parade in three weeks and the last thing they need is this shit. The pressure to lock it down is growing intense, and comes with increasing political strictures – as the bureaucracy expands to contain the disaster zone, who is in charge and what’s permitted becomes opaque even to those within the system. Confusion and disarray take over, as officials try to cover themselves, different departments say different things, orders are delayed, reversed or rescinded, rumors fly, Twitter tries to make sense of it all and no one believes anything that the government says.

They can’t be serious. https://t.co/E2NwwjosL3

All but certain that evacuation is happening. Our school at the edge of the blast is closed until further notice. https://t.co/CYkD7Q33hD

A #Tianjin govt spokesman said he’ll need to check who is in charge of the rescue operation of the deadly explosions. pic.twitter.com/8CQMMwYApV

Rather than the Oriental Star model, an old-fashioned clusterfuck with Chinese characteristics is playing out on social apps (here’s one take on absorbing the events over WeChat that Thursday), with some powerful local media doing their best to defy orders in the circumstances.

With alternative information widely available, the traditional propaganda, such as a decision to play up the “public service martyrs” storyline (it worked so damn well before, with those frogmen in the Yangtze), feels hasty, reflexive and off-key. Particularly, it won’t wash when the rescue workers look like lambs to the slaughter, many barely out of their teens, sent in without any proper protection or information to put out a raging chemical fire with water.

Chinese people may claim to “trust” their government in what they do or where the nation is heading, but that’s only because their objectives – economic growth and nationalist pride – roughly overlap for now. And, really, what’s the alternative in an authoritarian one-party state? But they certainly don’t believe, or place trust, in anything their government says, precisely because those same shared imperatives (nationalism, wealth accumulation) require all kinds of obfuscation, denial and logical gymnastics (“Everything is fine, we’re evacuating the area”).

For the bosses, yet another round of crackdowns and soul-searching – how did we fuck up the cover-up this time? – will almost certainly be in order. If the dust cloud heading toward Beijing has a silver lining of potassium cyanide, it’s this: Whatever serene sense of leadership you may have had about China’s grip on handling crises should be evaporating like a cloud of nitrate gas into the autumn air.