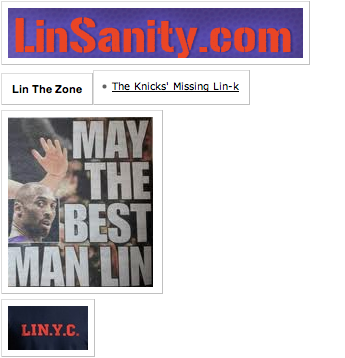 Deadspin’s Barry Petchesky posted excerpts of an email sent by the Asian American Journalists Association yesterday (earlier today for those in China) that includes a list of stereotypes for journalists to avoid when covering Jeremy Lin. As Petchesky hilariously points out, “Half of these are references nobody’s even made yet, so thanks, AAJA, for giving racists some new ideas,” and then says, “Puns are the absolute lowest form of human discourse, and that’s still an insult to the entire concept of a pun.” We couldn’t agree more. But hey, if you’re a racist out there aspiring for cleverness, after the jump you’ll find a bunch of ideas for making fun of Asian Americans, courtesy of the AAJA!

“CHINK”: Pejorative; do not use in a context involving an Asian person on someone who is Asian American. Extreme care is needed if using the well-trod phrase “chink in the armor”; be mindful that the context does not involve Asia, Asians or Asian Americans.

DRIVING: This is part of the sport of basketball, but resist the temptation to refer to an “Asian who knows how to drive.”

EYE SHAPE: This is irrelevant. Do not make such references if discussing Lin’s vision.

FOOD: Is there a compelling reason to draw a connection between Lin and fortune cookies, takeout boxes or similar imagery? In the majority of news coverage, the answer will be no.

MARTIAL ARTS: You’re writing about a basketball player. Don’t conflate his skills with judo, karate, tae kwon do, etc. Do not refer to Lin as “Grasshopper” or similar names associated with martial-arts stereotypes.

“ME LOVE YOU LIN TIME”: Avoid. This is a lazy pun on the athlete’s name and alludes to the broken English of a Hollywood caricature from the 1980s.

“YELLOW MAMBA”: This nickname that some have used for Lin plays off the “Black Mamba” nickname used by NBA star Kobe Bryant. It should be avoided. Asian immigrants in the United States in the 19th and 20th centuries were subjected to discriminatory treatment resulting from a fear of a “Yellow Peril” that was touted in the media, which led to legislation such as the Chinese Exclusion Act.

All this was available on AAJA’s website, but now all you see when you click on the link is 503 error, “Service Temporarily Unavailable.” (UPDATE: it’s because of server issues, apparently. The AAJA Twitter account is directing people here for the full advisory.)

I probably never did sign up for AAJA, but just in case: UNSUBSCRIBE.

3 Responses to “A Question For The Asian American Journalists Association: If You Take Political Correctness Too Far, Do You End Up in China? (Shit, Was That Racist?)”