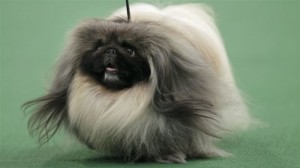 Well. This is kind of adorable.

I don’t mean the dog, named Malachy, which won Best in Show on Tuesday night. I mean this lead from the Associated Press: “A bobbing little pompom put on a peak performance at the Westminster Kennel Club.”

Now how long until someone seizes upon this bobbing pompom to make a statement about nationalism?

Yeah, TAKE THAT, Croatia, Germany and Ireland. Your dogs are all inferior to the Beijing Peke.