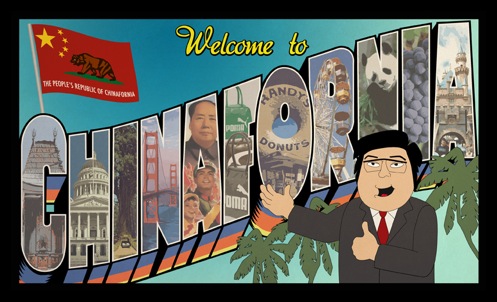 Chinafornia is The Daily Show meets The Simpsons, California meets China. In other words, a live-action version of China Daily Show meets Beijing Cream! (Too far?) We don’t see how it can go wrong, especially in the expert hands of animator and filmmaker (writer/producer/etc.) Ellie Lee, a five-time Emmy Award nominee and the brains behind this project. Like many great ideas though, Chinafornia has the problem of being too smart for the mainstream, as TV execs have told Lee. “My best guess as to why they passed on it is because nothing like it exists on American television,” she told us via email. “Asian & Asian-American characters are rare on American shows. Perhaps our series is too foreign, in a literal sense! Because it’s so different, the show may have seemed too risky for them.”

The project is currently on Kickstarter (which BJC contributor Alicia referred me to last week). Begins the synopsis: “America, 2018. The economy remains in a tailspin. Some Americans even cancel their cable. Unable to pay the $10 trillion it owes to China, the U.S. comes up with a plan: it gives China the state of California.”

Hijinks ensue. After the jump, Lee answers some of our questions.

What was your inspiration for this project?

When we came up with the idea for the show, we had been thinking a lot about American cold war films from the 1980s, and how the enemy was always the USSR. Over the next two decades, the national enemy became aliens, natural disasters and terrorists… And jumping to present day, we imagined that those doomsday storylines might revolve around a new superpower like China attacking the US. And then it dawned on us: what if we weren’t attacked? What if we just gave China a state like California, because our hands were tied due to our debt? All of a sudden, the storyline became absurd and hilarious. We thought it would be a really funny vehicle to explore many of the absurdities in current US politics, world politics, and pop culture.

I understand you’ve lived in Beijing before? What do you think of the city? Of China?

Actually, I’ve never lived in Beijing. I was born in Hong Kong, and over the past decade, I’ve really enjoyed visiting Beijing for weeks at a time with my family and friends. I vividly remember my first morning in Beijing. I wandered into a public park, and was amazed to find 1,000 people already in the park, doing tai chi paddle ball, ballroom dancing, ribbon dancing, doing gymnastics, juggling/balancing the flower stick, playing wind instruments and singing and dancing to traditional folk songs. The park was so full of life and energy, and strangers of all ages welcomed me and invited me to ballroom dance and tai chi paddle ball with them. I just fell in love with the city immediately.

Because I am an emigrant to the US, I think that’s why I’m so drawn to stories about culture clashes, as you see in “Chinafornia.” I think culture clashes are such a big part of the American experience, and I love them because they are inherently hilarious and can be quite endearing.

I might just be incompetent and unable to find this info on Kickstarter, but when did you start your Kickstarter page?

You’re funny. That info is actually quite hard to find, so it’s not you! Our Kickstarter campaign launched two weeks ago, on March 11. Our project was selected to participate in a live crowd-funding event at the San Francisco International Asian American Film Festival. The festival was the primary reason why I launched a Kickstarter campaign. If not for the festival, the scripts would just be sitting on my desk, collecting dust.

Any chance we can get a sneak peek at a clip?

Unfortunately, we don’t have any animation completed yet. We’ve written several scripts, and we’re aiming to start animating the first episode as soon as our Kickstarter campaign concludes – that is, if we’re successful in raising our goal. Kickstarter is all-or-nothing funding, and if we don’t meet our goal by our May 10th deadline, we receive $0. So if your readers like our project, please spread the word, share our Kickstarter campaign with your friends, and help us jump start production! We would be forever grateful!

3 Responses to “A Kickstarter Project Worth Your Attention: Chinafornia”