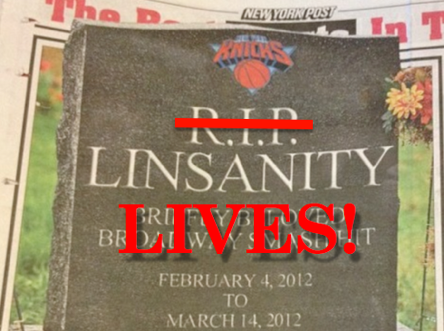 Reports of Linsanity’s demise have been greatly exaggerated. For one, he’s still starting. For another, his inspirational story of hard work, perseverance, and being Asian is coming to the silver screen. This was only a matter of time, wasn’t it?

According to China Daily, a Beijing-based culture and media company called Lafeng Entertainment is in preproduction on a 30-episode, 50-million yuan ($7.9 million) TV series based on Jeremy Lin’s life, starring mainland “heartthrob” Lu Yulin. The show will be called — in spectacular mistranslation — “Awesome Basketball Kid.” [Ed's note: by "mistranslation" I simply mean that it's Chinglish. 篮球豪小子 is the title in Chinese; I suppose the more literal "Basketball Hao ('heroic,' also the same character in Lin's Chinese name, Shuhao) Kid" would have been worse.]

The phone number on Lafeng’s website doesn’t work, so I’ve sent the company an email. Updates as they become available.

“Lin’s story is amazing. He is a role model, whose determination and perseverance serve as a fine source material for an uplifting TV series…. Most people simply saw Lin’s halo after he jumped to stardom. They didn’t really know what he has gone through, and that’s the part we want to present.”

That’s the part you want to present. And?

“In other parts, it will have romantic scenes, which are important segments of the show, as the lead character will be involved in relationships with heroines.”

Knowing Chinese TV, this will be unwatchable. But hey, Jeremy Lin has pulled off miracles before, to say nothing of making game-winning shots.

UPDATE, 5:30 pm: According to DF Daily, Lafeng Entertainment revealed its plans for this series on March 15 (Chinese news sometimes ferries over to English media’s shore). Notably, DF Daily (and also Chongqing Times) reported Lafeng head Chen Meilin as saying that while there’s been a lot of speculation about Lin’s romantic interest, most of the girls have been foreigners. His show, however, will “definitely” not cast a foreign female lead – not anyone less than “100 percent Chinese” — because, as he says by way of aphorism, “rich water shouldn’t be let out of one’s own fields.”

This makes sense, we think. Kim Kardashian is Lin’s Nurse Gillian, threatening to doom and defile this stranger in a strange land. It’s only right that Lin mates with his own kind.