Tudou video after the jump.

I sit in my room only wanting to stalk my friends on Facebook, and Kony is the first to greet me at log-in. I leave my door, and Kony hails me from his plastered paper post on the elementary school chain-link fence. Kony is currently the American equivalent to fireworks at Lantern Festival time, outside and inside your home at all hours.

KONY 2012 is a video from Invisible Children Inc., a San Diego-based NGO fighting to bring the Lord’s Resistance Army (LRA), an army of children led by Joseph Kony, to international attention. Uploaded onto YouTube on March 5, it currently has close to 77 million views (even though Googling “Kony” only returns 36.5 million hits). It made it to China on March 10, where 1.7 million clicks have been logged so far on Tudou.

The LRA in its current incarnation was created in 1987, led by Kony, a man who fancies himself a spokesperson for God. He abducts children, forcing boys to kill and girls into sexual enslavement. Originally in Uganda, the group has been moving through other African countries since 2006.

Among Invisible Children’s biggest celebrity supporters are Bill Gates, Nicki Minaj, Taylor Swift, and Rihanna — but really, the video is so viral that celebrities don’t need to throw their weight behind it anymore. YouTube statistics show people are watching from all over the world, including China. ChinaSMACK has done a lovely compilation of netizen reactions.

Yet when searching for more information on Kony, don’t be embarrassed if you accidently find yourself on Cedar city, Utah’s country music radio station. It’s an easy mistake to make. KONY 2012 is also not to be confused with the Kings of New York, which is still Urban Dictionary’s top hit for Kony. (Seriously? No offense, Jay-Z.) Or memes like this: 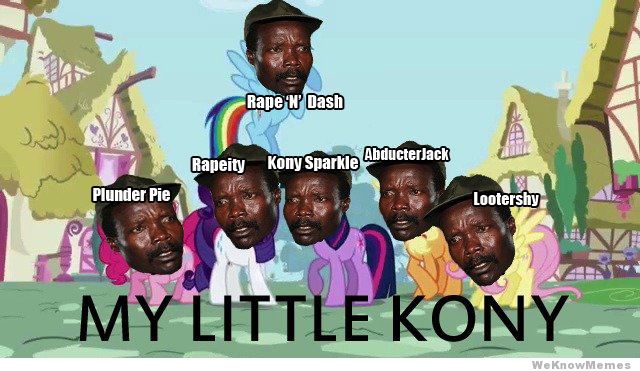 What the memes reflect, though subtly, is cynicism. Though there’s no shortage of open criticism, either. The Grumpy Owl has found more than a few well-articulated critiques. (You’re familiar with Rudyard Kipling’s poem “The White Man’s Burden”?) Nigerian-American writer Teju Cole has also captured a fair bit of attention with his tweet, “The White Savior Industrial Complex is not about justice. It is about having a big emotional experience that validates privilege.” There is also our culture of “slacktivism”: clicking one’s mouse is not an act of moral courage. (Slacktivists — yes, this will be the new hot word of 2012 – have been trolled with the likes of Carl Weathers.)

But in the end, KONY 2012 achieved what it set out to do — inform the public. Musa Okwonga of the Independent says it better than I ever could:

Murderers and torturers tend to prefer anonymity, and if not that then respectability: that way, they can go about their work largely unhindered.

I don’t think that Invisible Children are naïve. I don’t think that President Obama was ever blind to this matter either: his own father, a Kenyan, hails from the Luo, the same tribal group that has suffered so much at the hands of Kony. My hunch – and hope – is that they see this campaign as a way to encourage wider and deeper questions about wholly inadequate governance in this area of Africa.

Here are some other articles to check out if you want to learn more. Kony is here, and if you live on planet Earth, you’re gonna have to deal with it. How you deal with it, though…

Others object to the reduction of a complex situation to the story of a single ‘bad guy’ whose capture would magically restore harmony to a conflict-scarred region, and surely some object to the casual invocation of Hitler (is it a coincidence that the day of action promoted in the video is April 20, Hitler’s birthday?).

We are entering an age when the shallow political power of the public — including those too young to vote — will increasingly help shape our policy debates. And yes, that is scary to professional foreign policy experts, much in the same way reference book authors with graduate degrees were rattled by the idea of an online encyclopedia created collectively by amateurs.

3 Responses to “Now That It’s Arrived In China… What Is Kony?”