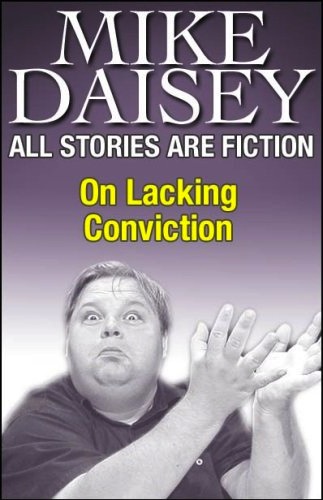 And boy do they land some hard blows. After the jump, excerpts from Evan Osnos, James Fallows, Craig Silverman, Ira Glass and David Carr.

I apologize in advance for the length of these excerpts — I usually make a point to keep these short so as to give readers motivation to click on the links and reward the authors with a page hit. On this topic, though, I trust you’re likely to click through anyway.

But Daisey lied. He made up things about his trip, and the show’s attempts at fact-checking failed to uncover them. It all fell apart when Rob Schmitz, a seasoned reporter who is the China correspondent for the public-radio program ‘Marketplace,’ got suspicious and tracked down the translator who’d worked with Daisey. It’s worth a listen, but, in short, Schmitz discovers that Daisey made up scenes, never took notes, conflated workers, never visited a dorm room, and so on. Watching it unravel from Beijing makes me wonder: What does the debacle say about how we all look at China? Why were so many people so eager to believe it?

…Daisey’s undoing was that he turned out to be naïve in a way that he didn’t understand. He thought that China was so exotic and far away that it was uncheckable; that it was okay to take “a few shortcuts in my passion to be heard,” as he put it in his follow-up interview. (That’s a cliché too, of course, borrowed from every fabulist since Janet Cooke.)

But China, it turns out, is not so far away. Daisey’s fiction was predicated on the notion that China is essentially unknowable, that reporters never go to factory gates, that highways exit to nowhere. And he might have gotten away with it twenty years ago. But these days, it’s no longer so far away at all. It’s close enough to make an iPhone today and have it on a U.S. store shelf next week. And it’s closer in another important way as well—in overestimating his own ability, Daisey underestimated a lot of other people. He didn’t realize that podcasts are often followed by listeners with real knowledge on his subject: American expats who probably rely even more on podcasts than other people because it’s so difficult to get books and magazines and radio stories over here.

When I heard Daisey’s Shenzhen riff on C-Span late last year, I wrote to a longtime friend who is also a friend and supporter of Daisey’s and had been trying to get us together. I said: This doesn’t sound right. I also said that I was bleakly amused by Daisey’s presenting the far-off exotic territory of “Shenzhen, China” as some super-secretive realm that he alone had thought to unveil. I pointed out that I had done a gigantic cover story and on-line slide show about this unknown land back in 2007, plus later in a book and a video series; that the Wall Street Journal had done hundreds of stories with Shenzhen datelines before and since; that there had been countless books, picture shows, news features, etc, about the Shenzhen phenomenon; that “Foxconn” was hardly an unknown enterprise; etc.

…4) Go read that This American Life transcript again. It is superb in its unraveling of Daisey’s inventions; in its exploration and explanation of “real” journalistic values and the difference between fact and metaphor; and in its ending with a re-introduction of the real problems of workplace safety in China. It is full of passages like this, between Daisey and Ira Glass, after Glass has pointed out that some of Daisey’s monologue flat isn’t true:

Mike Daisey: Yeah. We have different worldviews on some of these things. I agree with you truth is really important.
Ira Glass: I know but I feel like I have the normal worldview. The normal worldview is somebody stands on stage and says ‘this happened to me,’ I think it happened to them, unless it’s clearly labeled as ‘here’s a work of fiction.’

“I feel like I have the normal worldview” is a line that will live, or deserves to.

Ira Glass talking to Mike Daisey, This American Life (rush transcript of the retraction… start on the bottom of page 13 for the Daisey interview):

Ira Glass: I guess I thought that you were going to come in and say that more if it wasn’t true because, um, there are parts of it I just don’t buy based on what you’ve said. I don’t believe you when it comes to the underage worker. Like, it seems credible that your translator if she saw an underage worker, it seems credible that she says that she would remember that kind of thing because it’d be so unusual. That seems credible. And I don’t believe you when it comes to the guy with the twisted hand because your translator who was there doesn’t remember that he said he worked for Foxconn and doesn’t remember the incident with the iPad. And I might be more inclined to believe you but you admit to lying about so many little things – the number of people who you spoke to, the number of factories that you visited – you admit to making up an entire group of characters who didn’t exist, who were poisoned by hexane and the only person who was with you said these things didn’t happen. So when it comes to underage workers and the man with the claw-hand it’s like – I don’t believe that that happened.

Ira Glass: That those things happened – those specific things.

Mike Daisey: Yes. And I stand by it as a theatrical work. I stand by how it makes people see and care about the situation that’s happening there. I stand by it in the theater. And I regret, deeply, that it was put into this context on your show.

Emboldened by the “This American Life” broadcast and his newfound attention, Daisey began to embody the character he’d created: a trustworthy crusader with the moral and factual authority to comment on Apple and media coverage of the company.

Nothing represents this misrepresentation better than Daisey’s recent blog post, “David Pogue is only competent to review gadgets.” That post rocketed around the Web, getting linked and tweeted by many journalists.

Sitting high on his stallion, Daisey gave a recent article by The New York Times writer a thorough Fisking. It was a devastating critique of the way Pogue covered Apple’s reaction to concerns about conditions at its overseas suppliers, and Daisey made valid points.

But with Daisey exposed as a liar, the valid parts of the critique lose their impact. The sections of the blog post that question Pogue’s work and integrity are now laughable coming from Daisey…

…Having lied to “This American Life” in order to have his work appear in a journalistic framework that added credibility and brought him and his cause greater attention, Daisey still felt qualified to question someone else’s ethics and qualifications.

Is it O.K. to lie on the way to telling a greater truth? The short answer is also the right one.

…I’m more concerned about the suggestion that you have to cheat to come up with remarkable journalism that tilts the rink. As it happens, Charles Duhigg, David Barboza and Keith Bradsher, reporters who work at The New York Times, spent a great deal of time last year investigating Apple’s suppliers and published a series in January that may have contained a bit less drama, but landed hard. Apple subsequently announced an audit of its Chinese supply chain by an independent group.

Finally… while my opinions hardly merit inclusion with the above, I’d like to append a quick thought to yesterday‘s post:

Mike Daisey has built a career out of storytelling, so he should know, better than anyone, that the best type of fiction is set in reality, which is necessarily complicated. His reality of China, however, is an oversimplified and gelded one in which Fu Manchu and Charlie Chan live. People are props, like the man with the mangled hands, and as such, we lose more than a little of both the spirit and the reality of real-life stories of struggle and perseverance, triumph and failure, those many stories that populate this country and every other. Here’s the part about Daisey’s defense that I think offends me the most: asked why he didn’t let This American Life’s fact-checkers interview his translator, he replies, “Well I did think it would unpack the complexities of” how the story gets told. You understand, that’s just his flimsy justification to himself; what he means is: he didn’t want other people to realize he had crafted a story beset with purple prose and broad strokes — a flunking one, if he were an MFA student — which could only be concealed and excused if the story were true. Mike Daisey has made a mockery of both reality and fiction.