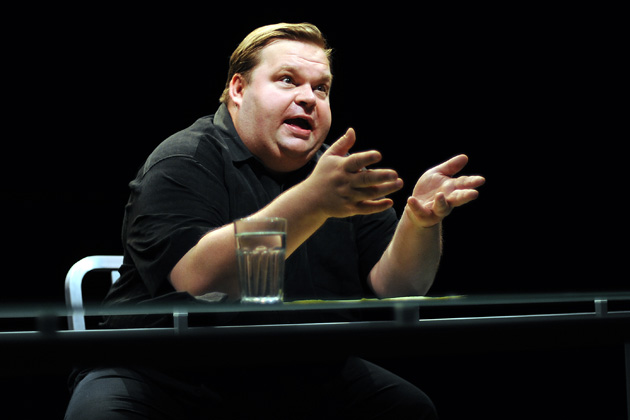 Picture via Mark Gimein’s post at Bloomberg Businessweek in which he essentially retracts his original review: “Usually, ‘art’ is art and ‘journalism’ is journalism. When the two meet, it’s rarely on the same stage. An exception is the work of monologuist Mike Daisey.”

Mike Daisey is not a China expert. This should be abundantly clear, because he tells you himself in his monologue The Agony and the Ecstasy of Steve Jobs:

This is performance art, and as such, it’s a pretty entertaining way of saying he is not a China expert. Got it. Unfortunately, he says in his very next breath:

Do you know, really?

We can excuse the man for not knowing China. But now that it’s clear he fabricated parts of his show, I wonder whether the public will be so forgiving of his mischaracterizations of the place. His monologue, as I reread it, is neither journalism nor art. It’s polemics. Daisey uses theater not to promote a cause or illuminate a greater truth, but to drive a narrative and sell tickets. And by the sheer weight of his charisma and his stage, he has obfuscated — deliberately or not — the real issues on the ground, all the while offering no solutions to the complexities of global economics, poverty, and China’s urban migration.

And frankly, a lot of his scenes are just plain bad:

And she listens to this, and she says, “But you…are not a businessman?”

And she says, “And you…aren’t going to buy their products?”

And I say, “That’s true. I am not going to buy their products.”

And for a moment, I think it isn’t going to work.

And then you can actually see the idea leap the synaptic gap from a Problem to a Problem-To-Be-Solved.

No, she did not say that very slowly, carefully, clearly, and quietly. She plainly did not do that, and yes, I’m telling you this as someone who does possess a passing familiarity with Chinese culture. That’s not how Chinese people speak.

Aesthetics aside, lying about what one sees and putting real faces to fake stories has consequences, and for Daisey to remain unremorseful in light of recent findings of manipulation and embellishment is to be intentionally daft in the hope that “art” will serve as bulwark against backlash. It won’t, because willfully or not, he packaged his story as journalism (willfully, I think), and as a result duped a whole lot of people.

When reasonable and intelligent critics tried to point out his mistakes, he told them off, like this:

As a fellow raconteur it’s painful to have to confront Mr. Fry with this fact, but he’s being a total idiot.

DAVID POGUE IS ONLY COMPETENT TO REVIEW GADGETS

And only now, in light of Marketplace’s Rob Schmitz’s fact-checking and This American Life’s very public retraction of its story about him, does he explicitly admit, “My show is a theatrical piece…”

Why didn’t we hear him say it before?  As Forbes’ Jeff Bercovici points out:

Anyone who’s surprised by Daisey’s utter lack of remorse or true introspection is unfamiliar with the works of other fabulists James Frey and Johann Hari. “I never meant my work to be taken as literal truth” is always the first line of defense for writers who see themselves as creative geniuses but end up finding success as purveyors of boring non-fiction.

The fact is, Foxconn pays relatively higher wages than other factories in Shenzhen, and it’s one of the more desirable jobs for many people. I’m not saying that makes it a particularly fun place to work. It offers nothing you or I would do, because we’re spoiled and we’re lucky as hell. But the reality is, for a lot of Foxconn’s employees, it is the right place for them at this current time, offering chances for promotions and the possibility of a previously unknown prosperity. As I wrote on Heart of Beijing in response to This American Life’s original story on Daisey in a post titled, “Because we dislike Foxconn, should we relieve 900,000 people of their jobs?”:

Unfortunately, the world is the way it is. It’s not the way bleeding hearts want it, and for that, we should all be sorry, we really should, but — at the risk of repeating myself — the world is the way it is, so that a 12-year-old child of an Anhui farmer who works 18 hours a day on the paddies might choose to seek employment in the big city to make four times as much as her parents at a company that draws the ire of the developed world. And what has the developed world ever given her? Never mind that American politicians don’t give a shit about her, they only complain about their own country’s jobs and the dollar-yuan exchange rate. That girl has a great story, and I applaud Mike Daisey for getting it and the hundred-plus other stories from Foxconn. I just fear that the China Narrative being the way it is — much like the world is the way it is — people will see the girl as merely a symbol of a “Communist regime.”

iPhone suicides, believe it or not, are not news to the Chinese. Nobody has done more aggressive reporting on the factory conditions at Foxconn than the Chinese press. Before foreigners noticed, newspapers in eastern and southern China were investigating the deaths of workers and Chinese bloggers were documenting more details about their daily lives than foreign visitors could hope to obtain. It’s one of those examples of how erratic the Chinese world of information is these days: the Chinese press is throttled on many issues, but when it concerns workplace conditions — or, better yet, a factory with a boss in Taiwan — the issue resonates with enough notes from old socialist hymns that it gets reported in astonishing detail.

A lot of people are doing real work on this subject, trying their best to represent a complicated reality. Meanwhile, Daisey is saying 12-year-olds build iPhones… and saying that accomplishes what, exactly? Get Americans to boycott the product, and then 12-year-olds in China will lead a happier existence?

Mike Daisey does not understand the situation because he doesn’t care to. At the risk of being wrong, I’ll go ahead and say that I believe Daisey feigns righteous anger to move the needle and that he’s known all along how much easier it is to entertain than to practice accountability. But whoever thought he’d be proud of that? “What I do is not journalism,” he writes on his site. “The tools of the theater are not the same as the tools of journalism.”

I’ll leave you with the Guardian‘s Bob Garfield:

Which is the most anguishing aspect of the whole episode. He has made me an accessory, not just by passing along his scandalous tale, but by exploiting my preparedness to believe him. Which is precisely how Big Lies work, as well. Like the Protocols of the Elders of Zion, or Saddam’s supposed weapons of mass destruction. The Bush administration’s fictions about Iraq frightened America because they seemed to confirm the nation’s worst fears and suspicions. Mike Daisey may be no Dick Cheney, but how do I know?

On this particular issue, those who are interested in an intimate look inside China’s factories should read Leslie Chang’s Factory Girls.