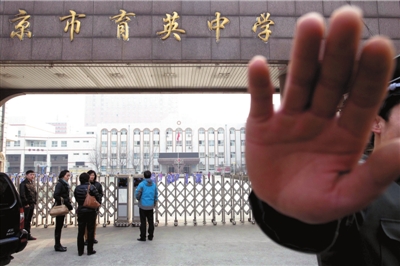 Via Jinghua Times (link below)

On February 28, students of Yuying High School were gathering on the playground at 9:30 am for their daily morning exercise when a girl appeared on the 4th floor of a north building. “She was standing at the window of a Grade 11 classroom, naked, holding her clothes,” a student recalled. “We were all petrified and didn’t know what to do. Within three seconds, she dropped the clothes next to her and jumped off the windowsill.”

Screams ripped across the playground. Twenty minutes later, an ambulance arrived to take the girl, Shen He – still alive – to the hospital. Authorities later confirmed that she died there. Around noon, police showed up for an “investigation.”

What’s with the quote marks, you wonder?

Because the school’s first priority was damage control. Forget counselling; the kids needed to have their story straight. And the school needed to make sure one thing was absolutely clear from the outset: it was an accident.

The local Jinghua Times reported “several students admitted that the school repeatedly told them not to disclose information to the outside world, especially the media; no online photos, and any online messages were to be deleted. If not deleted, they would be traced. The school said those who repeatedly make microblog posts would be expelled.”

Meanwhile, journalists and onlookers gathered around the entrance, not allowed in, while people attempting to take pictures were stopped by campus security. Institutional cover-ups are unfortunately universal – see last year’s disturbing Penn State saga – and they all have something in common: the inability of authority figures to acknowledge an ugly reality. But this case happened in China, and so it sheds light on an ugly side of this society: that school suicides are not uncommon, relatively speaking, but they are routinely dealt like this, as Sinostand’s Eric Fish has observed firsthand.

Though this incident occurred a week ago, students are still defiantly blogging against the express orders of heartless school administrators. These kids aren’t stupid: they want to know why they should tell others this was an accident when everyone saw the girl, naked, jump. The inept faculty can’t even be bothered to get their shoddy story straight.

Bungling, lazy cover-ups like these happen all the time in China, which is why last year’s Wenzhou high-speed train crash was such a flashpoint. People are fed up with the open contempt shown for them and their lives, hence among these online tributes, students are trying to figure out why Shen jumped, revealing she was close friends with another female student in Shanghai, Yu Jing Hai, with whom she shared interests and personality traits, and had gone to visit.

Following Shen’s death, Yu poignantly wrote on her blog: “I really miss you. I’m so tired, I feel like being surrounded by a dream, maybe you’re still alive when I wake up. I feel I’m in water, I can’t breathe. I feel so heavy and I need to float. I have so much to say to you. There are so many cold-hearted watchers, I can’t deal with them. I’m so tired. Everything’s so unreal. I so wish everything’s just a dream when I wake up. I want to find you now, I’ll make spaghetti for you and buy chicken feet for you. Are you still praying every Sunday evening? Maybe you’re by God’s side now already. I miss you, we all miss you. Maybe you just fell asleep. Maybe we’re all just a dream of ours.”

Perhaps I’m out on a limb here, but the possible romantic undercurrent to their relationship might be the most interesting aspect of this story. A number of similar stories of “forbidden love” passed my desk when I worked in state media – often involving suicide pacts, and even the odd murder – featuring high-strung female (and the odd male) students letting a teenage knock-back get out of hand. It was rarely made explicit, but it was clear that many of these were gay relationships. Reasons for breakups varied, but the religious angle – “Are you still praying every Sunday evening?” – may have some bearing here as well. Quite a few Chinese Christians have wholeheartedly embraced Catholic-style homophobia, like these celebrity fools.

But of course, thanks to Beijing Yuying Secondary School (hard at work, as we speak, hammering out a deal to buy the silence of the girl’s family and defuse any fallout), we’ll never know what really drove Shen He to such a terrible “accident” yesterday morning.

H/T Jingqing Luo for the story. RFH can be reached at RFH@beijingcream.com.