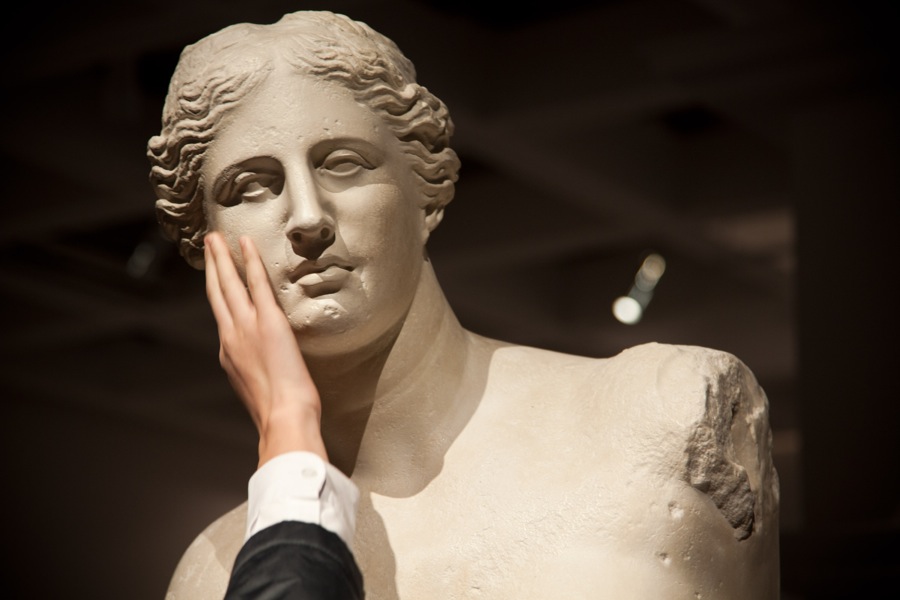 My retinal neuroprocessors shifted into slo-mo as his hand, fingers twitching, extended to caress the oil painting at the National Art Museum of China.

As a painter myself, I completely understand the urge to cop a feel of a comely piece of work. However, three points for consideration regarding this particular case of public non-consensual groping:

1. The offending appendages belonged to a man in his fifties. Had he been a toddler, we could have told him a few things. For example: oils from your skin can harm artwork. Look at the sculptures of Buddha and lions and dragons that get fondled religiously – even stone, metal, and wood get worn down to a sickly sheen under the relentless barrage of touchy-feely tourists. Now think about paint on canvas. If everyone touched it, there’d be nothing left.

But what can we say to a middle-aged, full-grown adult?

2. Where were the sirens that should have sounded the alarm calling over tens (of thousands) of unoccupied museum guards?

3. It wasn’t even a good painting. It was some sort of new-agey foreigner’s circular, pointless abstraction with thin and skeletal paint on an over-gessoed slick canvas… who would even want to touch that?

“Tactile appreciation,” as we’ll call it for now, is not the only problem at Chinese art museums. I have witnessed people leaning on glass cases, eating hot dogs (with mayo packets blazing), and, oh yeah, paddle-balling. But one cannot entirely blame these “viewers.” Guards meander happily through the crowds saying nothing. In heaven’s name, what are you being paid for if not to tell these paddle-ballers to cease and desist? If the system isn’t built with rules, how can there be punishment, the threat of which is an effective (albeit flawed) deterrent to objectionable behavior?

The US is littered with elementary schools that mandate field trips to the museum, unleashing hordes of sticky fingers of destruction on priceless artifacts. But most children, I’m happy to say, come away with a solemn respect for art. I have to believe there is a correlation between this and the first categorical rule of thumb: keep your hands to yourself. By dictating a strict “no touching” policy, teachers are instilling in their munchkins the idea that art deserves to be held in lofty esteem.

It’s not like that in China (and perhaps rightly so, considering the stuff passing for art). I’ve come to realize a few things:

1. The hands-off custom of viewing art in a sterile, high-ceilinged, white-walled environment is a primarily Western construct. China is in the middle of the adoption process, but has perhaps only embraced the aesthetics of the system thus far.

3. The Mao Era successfully subverted the idea of “individual genius.” Since art should theoretically be for everyone and not just the intellectual elite, museums often seem to be overly interactive to keep the interest of the “general public.” For example, the National Museum of China’s “Road of Rejuvenation” permanent exhibit includes flashing statuesdepicting moments of extreme political upheaval in life-size, full-fledged diorama action. Last summer’s “Translife” exhibit at NAMOC wins the award for best interactive sculpture, featuring Lawrence Malstaf’s “Nemo Observatorium”: one by one, visitors enter a ceiling-high snow globe; once the individual is seated in a central throne, a guard throws a switch, starting up a tornado-like wind that blows little bits of white “snow” cyclonically around without ever touching anyone’s body. The audience member is successfully brought to question the meaning of stillness in a world of ever-moving, ever-changing social and technological advancement.

In closing: If you have friends who touch things inappropriately, pass along Cookie Monster‘s sage advice: “But no no no, me know the rules: picture exciting, but not for biting.” 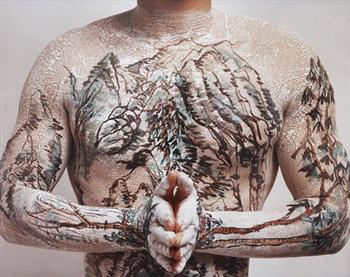 Huang Yan (黄岩, b. 1966) is a painter/sculptor/performance artist/photographer in Beijing who, unlike most, has managed to coerce the traditional landscape into the modern world in a strong and beautiful way. Using the human body as a canvas, Huang’s photos document traditional mountainous ink landscapes rippling across bodies, faces, and furniture. 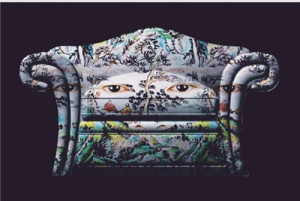 In terms of the traditional marriage of ink and paper, there are many artists who question their artistic predecessors, but the most common artistic response has been to change the content of the work, straying from the landscape in favor of the puppy (see: Guy on Art). Huang, on the other hand, questions the format of the medium itself. So even though China invented paper, Huang reinvents the meaning of “surface” and takes it to the next level. (I can’t help being reminded of Peter Greenaway’s The Pillow Book.)

Huang’s photographs are most breathtaking when seen in person, so if you get the chance, go check them out for yourself. In the words of LeVar Burton, “But you don’t have to take my word for it.”

“Do you feel that the development of Chinese art has been somehow stymied by its history, society, and education techniques, or has it become its own glorious institution as a result of these?”

Although we can trace art history from pre- to post-Mao, that doesn’t mean we can necessarily judge what good or bad effects this period will have on the broad span of Chinese art. It’s just too soon.

Contemporary Chinese artists have claimed, not rejected, the Mao years as an integral part of owning the past and of shaping the future of art. Of course, the way the art references the Mao era greatly depends on the age of the artist. Those who were young enough tend to depict a magical world of idealism. The older the artist, the more weary the work.

No matter which side of this divide the artist falls on, the reaction is inescapable. Art is always a response to the past and to artistic parentage. Turning a blind eye is a reaction in and of itself. And what we tend to forget is that all art in every country brings with it a shitload of baggage.

The wheel of art cannot be reinvented, and as an artist, no matter how often you wish to be an art orphan, you can never run far enough or fast enough to get away from the Greats (thanks for being there for me, Goya).

To question your heritage and build on it like Huang Yan is laudable. I’m afraid not as much can be said for misappropriated baggage; it’s what happens when China misuses Western art history.

And this is what happens when Westerners misuse Mandarin and Chinese calligraphy without understanding it (and in a far more public way than getting embarrassingly mistranslated tattoos). Know thy source materials. Come on, Vivienne Westwood, you’re better than that.

Finally, this is what happens when you start worrying about what your art will mean in the greater context of art history. I’ll leave it without comment.