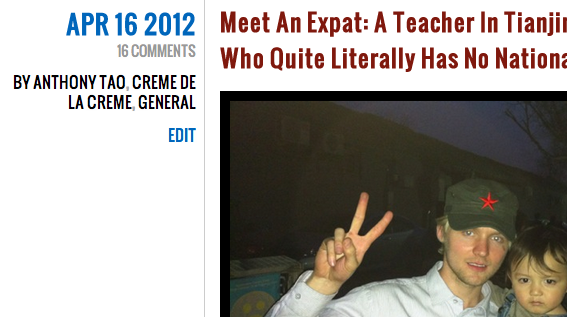 My name is Natsun. My friend’s name is Lee [Ed's note: name has been changed to protect his identity]. Anthony Tao recently published a blog post about our chance meeting at El Nido, a Beijing bar (with an absolutely impressive beer selection — you should check it out). I liked Tao’s article, but was very disappointed to read some of the reactions to it in the comments section. It’s not my habit to respond to rabble-rousers, but I think I’d be doing the Internet a disservice to turn down Tao’s very reasonable offer to respond to the visceral nature of many of the comments posted about my friend.

If you’ve already read Tao’s piece and are in the process of forming an opinion, there are a couple of facts worth considering. Neither Lee nor I make a habit of revealing everything about our lives to every journalist we meet moments after initially exchanging names, especially if they work for a publication that we have never actually heard of. Neither he nor I have an obligation to make every detail of our lives public. It’s also safe to assume that we, like many people being interviewed, tend to simplify information that is not relevant and focus on the information that is.

I’m not going to go into detail about our actual lives, but there is no reason to assume that Lee has done anything illegal in China or anywhere else. I will say that we’ve both done some teaching here (who hasn’t?) and continue to volunteer our efforts from time to time to help motivated learners. It doesn’t matter whether we’re currently teachers, because that information is irrelevant in an article about a guy who is attempting to acquire Chinese citizenship. Lee and I frequently introduce ourselves as teachers for simplicity’s sake. And the fact that Lee earns about 20,000 RMB each month doesn’t mean he works illegally – as the commenter “D” pointed out, legality really is a non-issue here. Lee is allowed to stay in China and work to support his family. Also, I won’t even mention the dozens of ways one can earn a decent wage without an official visa – read 4-Hour Workweek by Tim Ferriss if you need examples.

Ed’s note: Article 7 of the National Law of the People’s Republic of China states:

Foreign nationals or stateless persons who are willing to abide by China’s Constitution and laws and who meet one of the following conditions may be naturalised upon approval of their applications:

But in case you’re wondering, Lee and his wife share the responsibility of caring for their son, and both bring in money in addition to pursuing academic interests. And Lee isn’t in any way lying when he says he’s a teacher. Like most people, he’s actually a lot of things, including — yes — a brew master and math whiz.

The original article by Tao poked some fun at Chinese-based expats and their tendencies toward excessive alcohol consumption. It also presented an opportunity to learn something new about one person’s decisions regarding his nationality and efforts to make China his home for life.

I’m disappointed by the fact that a half-dozen commentators’ first reaction was to assume that Lee could be pigeonholed into the “bad laowai” stereotype we all know. Tao’s article was funny because it alluded to this stereotype, but the nature of profiles – especially those written off-the-cuff – makes it impossible to not be reductive to some degree. The Lee I know is not the caricature that appears in the story. Also, for the record, I’ve never used the F-word in my life, but if you extrapolate from Tao’s write-up, I’m a foul-mouthed foreigner who disrespects other people’s infant child as a lifestyle.

Instead of attacking Lee and making assumptions about who he really is or what his life actually consists of, we should use an article like this as a reminder that we all, at one time or another (if not regularly), fit the idiot foreigner stereotype in some way, and that we should to be willing to accept each other’s imperfections.

I met Lee half a year ago professionally, but we enjoyed each others company enough that our friendship continued after we were no longer working together. As for who he really is, here’s what I’ll say: I don’t know many foreigners who have met a girl they like when she was working a low-paying job at an Internet cafe, single-handedly taught her English from scratch, married her and committed to being a devoted husband for the rest of his life.

What I do see a lot of are foreigners who come to China after they’re completely washed up back home and marry the first girl desperate for a green card, or – and I’ve personally encountered this type of lowlife – people who take a local girl’s virginity, live together for a few years, then break up and return to their home country when they decide that the fun and excitement of living abroad has worn off.

I don’t see how being a dedicated husband and father who happens to want to spend the rest of his life in China even remotely makes Lee fit this bill of lousy expat. Even when he does have time to hang with me, which isn’t more than once a week because he tends to prioritize his family needs, we are much more likely to take his kid for a walk in the park than to go out for drinks — in fact, the first time I met him, in a cafe to interview for a job, his son came with.

Plenty of expats do fit the bad laowai stereotype — but don’t be so quick to assume they all do. You have a part of Lee story – to assume anything else about him without getting to know him would be an incredibly shortsighted thing to do.

Boredom drove Natsun to visit China for the first time six years ago. Competitively priced Tsingdao has brought him back five more times.