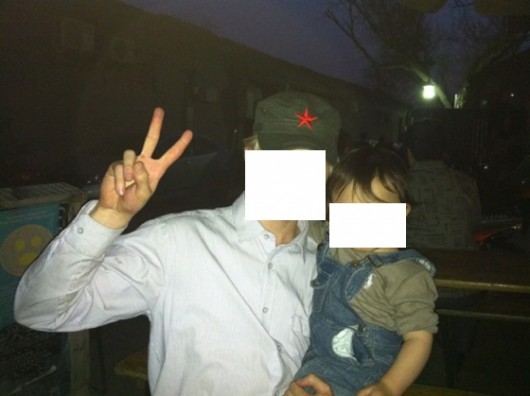 We were playing liar’s dice at El Nido when a pair of loud, demonstrably buzzed expats plopped down next to us on the wooden outdoor table. We made fast acquaintances. “Whoa, your English is really good,” said the man pictured above, to me. “You sound American.”

And we were off. We learned that the man — who introduced himself to us with his Chinese name, though we’ll just call him Lee [Ed's note: we've changed his name and his son's by request; see update, below] — was, despite all appearances, not American. And unlike his friend, Natsun, he was not Canadian, either. He tried to convince us he was Chinese. We expressed our doubts, and that’s when he admitted, OK, he wasn’t Chinese… yet. He was merely on his way toward Chinese citizenship.

I wondered aloud, “Don’t you have to spend a certain number of years here before you can apply for that?”

“Not if you’re stateless,” he replied.

For you see, Lee recently renounced his American citizenship, and it wasn’t for tax reasons. It was for his family.

He tried hiring an agent to obtain a business visa for him, but that plan fell through (after he’d relocated to Yunnan thinking it would work, exhausting his funds in the process; in case you were wondering, he moved to Yunnan from Guangzhou, which his wife thought was a dirty place, bad to give birth in; and before that, they were in Xiamen, because “I’m a southerner,” Lee said, “so when the first winter came in Tianjin, I said, This is far too cold for me, let’s get out of here”). He and his wife made their way back to Tianjin, where she gave birth to a son (Lee: “Fuck if I know” what his Chinese name means). And then the American — quite reasonably, in his opinion, but against his friends’ and wife’s wishes — renounced his citizenship.

“It feels like a burden off my shoulder, to be honest,” he said. “Being visa-less is much worse. Basically, there’s no line of deportation, no path of deportation ahead of me at this point. I feel relieved. My family is the most important thing to me.”

Lee came to China in 2009 because, in his words, “I wanted to marry a Chinese girl and have a kid.”

Natsun, sitting across from him, interjected, “His understanding was Chinese people are the smartest people.”

“So it would only make sense that he would marry a Chinese person and improve his gene pool.”

Lee called himself a eugenicist. And being one, why wouldn’t he pick the best place (the best race?) to ensure he self-propagates to the best of his ability?

“I came to China because I believe China has a good future,” he said. “In 40, 50 years, the upper class of China will be comparable to the upper class in the US. And my ability to excel in the US is limited. I’m run-of-the-mill there, nothing extraordinary. But once I come here, I’m automatically middle-upper class. I have the means to give my son a better education and ensure he’s part of the upper echelon.”

He readily acknowledged that he made this decision before he had his son, even before he met his wife (at a computer bar where she was employed and which he frequented to make calls), but he always had this nebulous “future child” in mind.

As logical as a man with his background could be, anyway.

Lee was wronged in the US — not by the country itself, but the circumstances of living there. An Illinois native who grew up in Florida, he battled hardship all his life, and experienced the sort of tragicomic calamities that only befall people you don’t know — stories that, once you hear, make you think, “Well fuck, that’s more trauma than I’ve endured in my lifetime.” The appropriate metaphor is less “poorly dealt hand” than “cheating dealer”: and it was a game he was forced to play with a constantly escalating ante.

Yet somehow, Lee survived, possibly because of a preternatural acumen. He claimed he scored a 180 on a psychologist-administered IQ test when he was in grade school. He attended middle school for just two months — due to delinquency, mostly — and high school for just one day, but eventually passed the GED without even studying. “And now I’m making 20,000 RMB a month,” he noted.

He explained that this entails figuring out a speedier way to break down numbers into their constituents.

“If someone found some way to do that, all computer, all bank encryption would be obsolete,” he said. “It’s not known how to do that at the moment. Once someone finds a way to do that, it’ll change the world. That’s my hobby right now.

“I’m an amateur of science – the original definition of amateur, ‘lover of.’”

His other hobby is brewing beers using a combination of traditional Chinese methods (inoculating with fungus) and Western methods.

“In a few months I’m hoping to be bottling my beer and trading it with other home brewers in Tianjin and Beijing,” he said. “I’d like to perfect it because right now it’s such an abstract idea — it’s not going to be good enough for resale in the immediate short term.”

His future, the son

“The reality is, China is expected to surpass the US in economy by 2050,” Lee said. “The upper class in China by that time will be better than the US’s standard upper class. By coming to China, I can ensure I can send him” — his son, splayed around his neck — “to the best school. In China, I make 20,000 RMB (a month). That’s really high. I can send him to a great school. By doing this, I can send him to the best school in Tianjin, in Beijing. I’m going to send him to the Young Communist Party [League]. I can ensure he’s really successful. When he’s 30 or 40, he’s going to be in a really good position.

“His whiteness will add a flavor to his personality that’s also going to be beneficial. I want him to speak native English but also be able to speak Chinese fluently.”

This entire time, the boy in his arms was fast asleep and clinging to his dad with all his strength. When Lee tried to hand him to Natsun so he could use the bathroom, the boy began to whine

“You fucking asshole!” Natsun blurted as he handed the boy back.

The people at the other table who overheard this laughed. At least one of my companions, however, didn’t find it funny that Lee also called his boy an asshole (though it’s true — find me one two-year-old who isn’t), and he seemed genuinely concerned that the father let the toddler sip beer out of a glass.

But over the course of the evening, the bond between father and son was evident. His son was separated from his dad for maybe one minute, when a passing Chinese woman called to the child and gushed over his cuteness.

“My goal in life is to have children that are successful,” the 24-year-old father said, stating he wants five children. “And where I see myself in five years is paving the way to my future.”

Later that evening, Natsun, Lee and his son leave for Beijing South Railway Station to catch an 11 pm train back to Tianjin. They’ve consumed many, many beers, and are deliriously happy, and saying how they should move to Beijing. The child is still comfortably asleep.

UPDATE, 1/1/14: Lee emailed us on New Year’s Eve to say this post may be impeding his plans to “naturalize and build my identity.” He asked us to change the names in this post, which we have obliged. He also offered this update:

A few months after our encounter at the bar, the American embassy called me in for another meeting; they had a man from Homeland Security question me as to my motives. When I had answered all of their questions, they provided a stamped version of my renunciation affirmation.

I was using my wife’s I.D. to commute to Beijing and back at the time, but soon realized that I couldn’t depend on that being a viable option in the future. I researched for travel documents that could be provided for the stateless and refugees. Ultimately, I only found one viable option which was the “World Passport.” Submitting the required materials and information, my new passport arrived soon thereafter. It has been a blessing, allowing me to travel and survive while I exist in this gray limbo. Despite all of its uses, it is not part of their list of passports that they have to click on when you apply for a visa. Thus, I am ineligible for any type of legal documentation at the moment. The office of foreign affairs has been attempting to help me, or at least document my situation… though I can only imagine my application for naturalization sits buried in some large stack of papers on the desk of one with far more pressing concerns than what to do with me.

In the meantime, I have been fairly successful despite my disadvantage. Offering my efforts as a volunteer for my wife allows us to have a decent income without breaking any laws; I/she/we have even been promoted recently.

Only the long wait of bureaucracy limits us for now, but the wait isn’t too bad. In fact, there’s nowhere I’d rather be.

26 Responses to “Meet An Expat: A Teacher In Tianjin With An IQ Of 180 Who Quite Literally Has No Nationality”