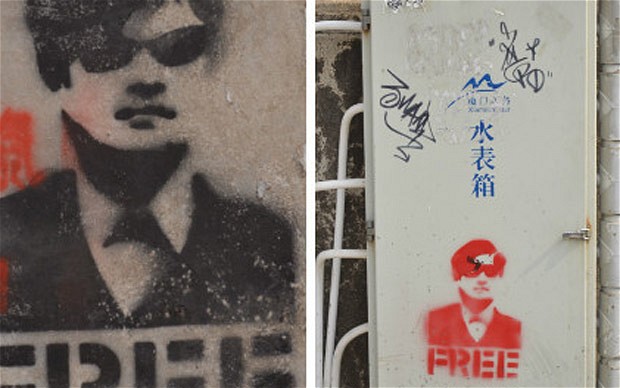 Pic via The Telegraph

According to the Associated Press:

Chen Guangcheng slipped out of his usually well-guarded house in Dongshigu town on Sunday, said the campaigners, who are based in China and overseas. He Peirong, a leading campaigner for Chen’s freedom, said she picked him up and drove him to “a relatively safe place” she would not further describe.

“His mental state is pretty good. He’s alive, but whether he’s safe I don’t know,” He said from her home city of Nanjing. She said she left Chen a few days ago but declined to discuss further details, other than to say he is no longer in his home province of Shandong, southeast of Beijing.

Chen is not in the US Embassy and not in Shandong, but he’s “safe.” Predictably, his escape has infuriated his wardens, the type of thugs who would break into a house with a feverish six-year-old child and harass the family just because they’re having a bad day. As Yaxue Cao of Seeing Red in China notes:

Around 11 o’clock at night, Zhang Jian (张健, the head of the township who had more than once beaten CGC before) and a groups of thugs broke into the house of Chen Guangfu and took him away. They also tried to apprehend Chen Kegui who lives in the same property but in adjoining rooms. Kegui didn’t know what was going on, what they wanted. He was enraged by these people breaking into his home and taking away his frail father without showing any IDs or documents. His own six-year-old son was sick with a fever. His mother was screaming and crying. Kegui confronted the thugs with two kitchen knives and whacked them. The thugs ran away. Kegui called the police to surrender himself. When he answered my call around 2am Beijing time, he was outside the village waiting for the police. He had multiple injures from the thugs.

Without knowing a thing about the thugs, it seems to me they deserved all the cleaving they got, plus all that they didn’t get. You can listen to a recording of Cao’s conversation when Chen Kegui on Free CGC.